Svitlana Protsenko's new job represents a new start for her family and an important new hope for the industry that sustains the New Brunswick town the Protsenkos now call home.

Svitlana Protsenko's new job represents a new start for her family and an important new hope for the industry that sustains the New Brunswick town the Protsenkos now call home.

Protsenko, her husband and their three children came to Saint-Quentin from Kharkiv, Ukraine, 32 kilometres from the border with Russia.

They are just one of the families who've make the trip from Ukraine this year to work in the forestry sector, which is suddenly facing a labour crisis. 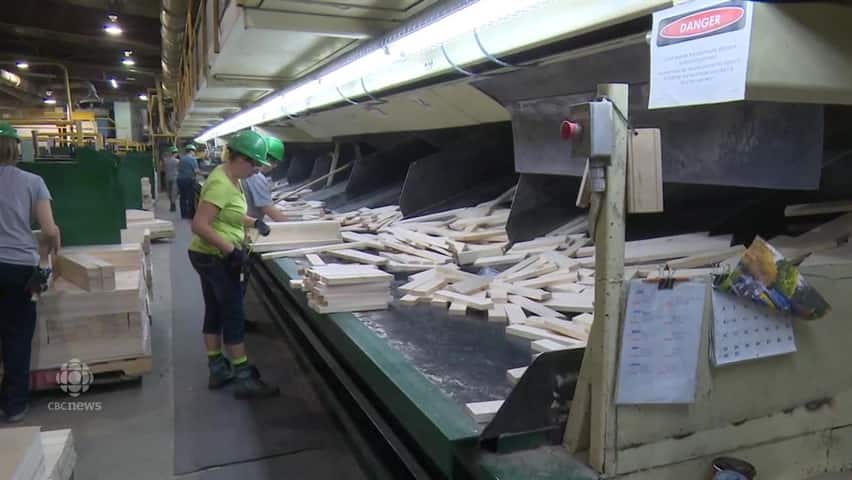 2 years ago
0:30
Almost half of New Brunswick's forestry workers are nearing the age of retirement. Industry experts say international recruiting is the way of the future. 0:30

Monday was Protsenko's first day of work. After a few days of orientation and safety training, she and her husband will begin work for Groupe Savoie, a manufacturer of hardwood products.

"We came here to work and to live," said Protsenko. "And the job is always the most important thing when it comes to where we are living."

Nicole Somers, mayor of Saint-Quentin, said 48 immigrants have settled in Saint Quentin this year, to the delight and relief of the town of about 2,200 in northwestern New Brunswick.

"Saint-Quentin is a small place in the middle of nowhere," Somers said. "We're far from all big centres. But just the same they chose to be here."

In a province where forestry is a staple of the economy, immigration is the inevitable answer to a labour shortage, according to industry representatives.

"Immigration will certainly be one of the paths we take to try and solve this problem," said Mike Legere, executive director of Forest NB.

Forest NB represents 15 forestry companies across the province, although not the forestry giant J.D. Irving Ltd.

Legere said his members are starting to focus recruiting efforts in other countries because of a lack of prospective young employees at home and an aging workforce.

"About 42, 43 per cent is in that 55-plus age bracket and we're looking at massive retirements here," said Legere. "In the next 10 years, we're going to lose about two-thirds of our workforce though retirement. We can't replace that."

Recruiting immigrants to work in the woods has been the strategy for J.D. Irving as well in recent months. The small rural community of Chipman has begun bringing in workers from Ukraine, Latvia, Finland and Brazil.

"It's very much an industry-wide and multi-sectorial problem," he said.

Groupe Savoie says it started going abroad for workers because finding them in New Brunswick has become nearly impossible.

"We're a small town and it's getting harder," said Nathalie Savoie, the chair of the board of directors of Groupe Savoie and the vice-president of human resources.

The company, which employs about 550 in harvesting and manufacturing, has to battle a shrinking population and the departure of younger people for urban centres for school and work, she said.

"And slowly we started exploring other possibilities of finding people within the province, and within the country," Savoie  said. "And then we tried to find people from other countries."

Savoie said the company first tried to recruit in France, but only one family took up the offer of a move to Saint-Quentin and eventual Canadian citizenship. Recruitment in Ukraine proved more successful.

"We recruited about 16 families," she said. "They haven't all arrived yet because it's a really long process."

Savoie said that in addition to recruitment efforts, her company was also able to hire 12 people from the Philippines who had been working as temporary foreign workers in southern New Brunswick but were displaced when the lobster plant they were working at burned down.

"They wanted to become permanent residents," she said. "So we've started that process with them."

According to Savoie, the biggest challenges with bringing in immigrants are housing and language.

The town said it is working with industry, volunteers and local schools to supply French-language training.

"For the French immigrants, it's a breeze and they can communicate very well," said Somers. "But even though the community speaks good enough English, we really want them to learn French, so we have volunteers because [the New Brunswick community college] cannot take all of them right now."

So far, Saint-Quentin has been able to supply enough homes for the newcomers, but Somers admitted the town is running out of housing and could face a shortage soon.

"Up until now, we've managed," she said. "We're doing good. And we just learned last week that there is an investor that's going to build apartments."

Somers said community members are working together to welcome the newcomers, although there is a wariness among a few people who don't like change or believe the newcomers are taking jobs.

Most people realize that getting new workers in the area can mean only good things, including keeping shrinking schools open and local services available.

Savoie said there is often a "ridiculous" misconception that immigrant workers are willing to work for less and are paid less than local people.

Legere said the jobs being offered to immigrants are the same as those New Brunswickers have been turning their noses up at for some time.

"People say, 'They're taking away jobs from native New Brunswickers who were here already,'" said Legere. "That wouldn't be a problem if we had people come in and take those roles. Maybe they're just not qualified, maybe they just don't have the aptitude, or maybe they're just not applying. Probably a combination of all those reasons."

For Protsenko, the new job means a new start for her family, and she said she's eager to get to work.

The location in northern New Brunswick is a bonus.