Fishermen posing on piles of dead marine animals has Fisheries and Oceans Canada investigating the possibility of poaching and shark finning at the Bradford's Cove Weir in Grand Manan. 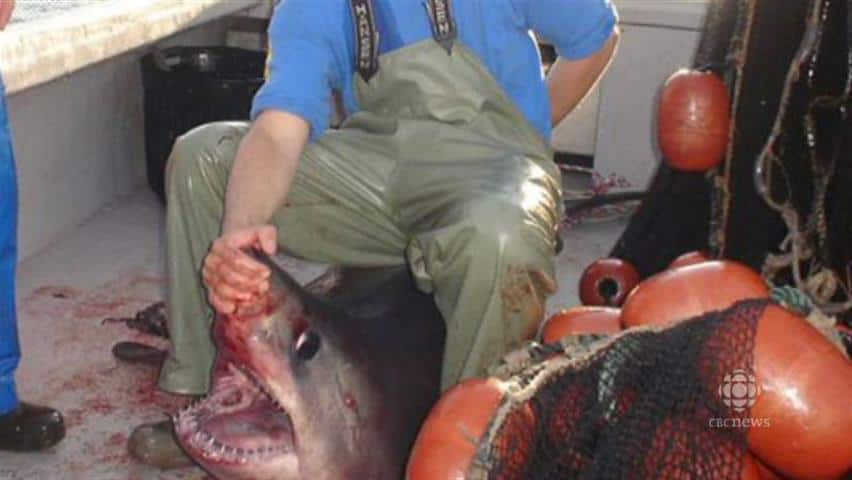 7 years ago
3:07
Fisheries and Oceans Canada is investigating possible poaching and shark finning in Grand Manan. 3:07

Fishermen posing on piles of dead marine animals has Fisheries and Oceans Canada investigating the possibility of poaching and shark finning at the Bradford’s Cove weir in Grand Manan.

In a series of photos and video obtained by CBC News, weir fishermen are posing on top and alongside what appear to be piles of dead, bloody, porbeagle sharks. There is a harbour porpoise and a dead basking shark in the photos as well.

In one video a fisherman straddles a dead porbeagle shark, grabs it by the nose, jerking its lifeless head up and down, pretends the shark is laughing and proclaiming, "Bradford's Cove Weir."

Other photos show a dead shark strung up on a boat at night and drenched in blood. A fisherman appears to be cutting into the dead animal’s fins.

When presented with the photo of the dead shark being carved up, McKinnon said the activity appeared to be illegal.

"If that is a shark and the fins are being taken off of it in that fashion and it hasn't been landed, it's illegal."

An active investigation is underway to find out why the porbeagle sharks were hauled on board a weir fishing boat. So far no charges have been laid by DFO.

The most recent photo features a grinning fisherman sitting atop a pile of four dead porbeagle sharks.

A total of 20 pictures and a video of dead marine animals were obtained by CBC News before they were suddenly removed from Facebook.

CBC News tried to contact the holder of the fishing licence for the Bradford Cove weir by phone but received no answer.

His home and office on Grand Manan were also visited but he was not available at either location.

The majority of the dead animals are porbeagle sharks, many appear bloodied.

Steve Turnbull, a marine biologist and shark expert at the University of New Brunswick in Saint John, said the gushing blood from the sharks is an indicator that the animals were killed within minutes of the pictures being taken and not found dead and brought aboard.

"Dead sharks do not bleed like that unless they are gutted," Turnbull said.

Turnbull researches sharks in the Bay of Fundy, tagging them and releasing them.

He said they are an endangered species even though the federal government has not granted them official status yet.

Porbeagle sharks are considered threatened until more is known about their population statistics.

Researchers, such as Turnbull, are hoping to have the endangered status secured in the next year or two.

Given how he feels about the shark species and its current condition Turnbull was solemn when presented the photos of the dead sharks.

"It's pretty disappointing," he said.

"Looking at the images, knowing what I know about the sharks around here, they were probably all alive."

There is still very limited commercial fishing of the sharks in Canada. It can only be done when granted a specific licence for that species of fish.

All animals caught in fishing weirs are considered bycatch. Under the Fisheries Act, any animal caught in a weir must be returned to the ocean, not slain, regardless of species.

"Bycatch situation in a weir is you're supposed to release from the weir in a manner that causes the least amount of harm to the fish or animal," said McKinnon.

The rules for weir bycatch differ from other methods of fishing such as long-line. When fishing with a line for tuna or swordfish there is a quota for the amount of shark bycatch that can be kept by fishermen. There is no quota for any species of shark in weir fishing.

Many of the photos of the dead sharks are taken from within the weir or with it in the background.

Brian Guptill, the president of the Grand Manan Fishermen’s Association, said the majority of the time bycatch release of animals caught in weirs is successful but there are issues.

"You try and remove them alive if possible," said Guptill.

"But sometimes in the recovery process a snarl will happen and you're not successful."

Guptill said the killing of bycatch is not what weir fishermen normally set out to do.

"The fishermen aren't in it to kill something that they can't make money off of or is bad publicity. It's not a good thing to do," he said.

But the association’s president said he had no idea that sharks were labeled a no catch and that they were listed as a species at risk.

"I didn't know personally that the porbeagle was on the list. I've never seen anything from DFO telling me that it was," he said.

Guptill said that it's up to the federal government to better educate fishermen on what species are listed.

He showed a document that he said was the last list of species that were to be given special consideration that he was sent.

It listed Leatherback turtles, two species of wolfish and a pair of whale species. The document was dated 2001.

DFO’s McKinnon said the rules around bycatch are simple.

"They are allowed to keep 10 per cent mackerel bycatch, but all other species must be returned," he said.