Many Moncton homeless back on the streets as emergency shelters close

Jonah Gibson-Eagles isn't looking forward to pitching a tent and sleeping outside tonight, but that is likely what he will end up doing. He is one of about 100 people in Moncton who slept in one of the two emergency winter shelters that closed on Monday morning.

Jonah Gibson-Eagles isn't looking forward to pitching a tent and sleeping outside tonight, but that is likely what he will end up doing.

He is one of about 100 people in Moncton who slept in the emergency out-of-the-cold shelters over the winter. Both of those shelters closed on Monday morning.

"It was definitely a damp mood," Gibson-Eagles said of his last night in the shelter at the Humanity Project on St. George Street.

He left with a tent under one arm, and a sleeping bag under the other.

"A lot of us are unsure of where we're going to live," he said. "We're outcasted for sure. It sucks."

Philip Brewster, 57, considers himself one of the lucky ones.

He said he was nervous, sick and couldn't sleep because he was so worried about where he would end up when the Humanity Project closed its shelter.

"Everybody's been down, like almost crying and stuff. And I don't blame them. I was doing that until I found myself a place." 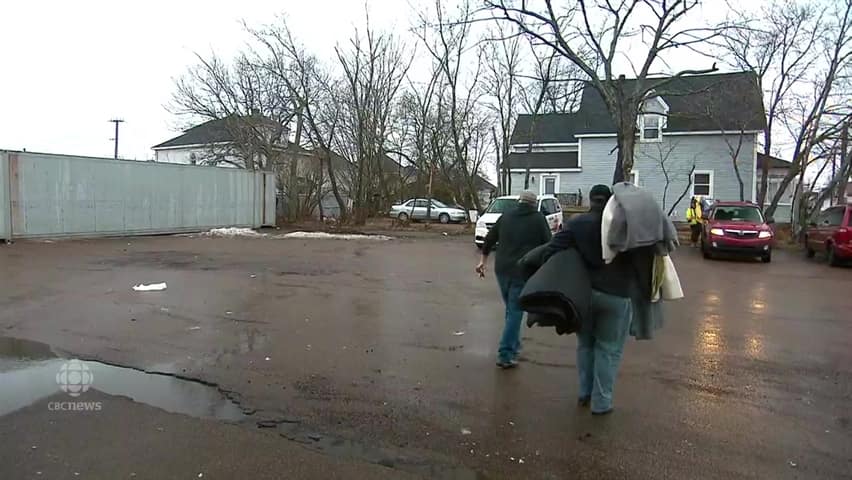 Homeless moving onto the street due to Moncton shelter closures

2 years agoVideo
0:53
Some of the people forced to move out of the shelters aren’t sure where they’re going to stay tonight. 0:53

In the past few days, Brewster managed to find a landlord with a three-bedroom apartment who was willing to work out a payment plan with him for the damage deposit.

"He's a really cool guy," he said of his new landlord. "Too bad he couldn't do that for all the homeless people … he must think we was nice guys or something to do it the way he did it."

Brewster and a friend from the shelter headed over to their new apartment on Monday. They have offered the third bedroom to a pregnant woman and her partner, who were also staying at the emergency shelter.

In Moncton, Department of Social Development spokesperson Danielle Elliott said new beds have been added to the permanent shelters to provide housing for some.

"An additional 56 beds will be available at the two existing shelters — Nazareth House and Harvest House — to accommodate individuals who had been using the out-of-the-cold shelter in the former fire station on Assomption Boulevard," Elliott wrote in an email statement.

Elliott said $659,000 is going toward helping people in Moncton, Fredericton and Saint John to find housing and to access health support and addiction services.

Brewster said that's good news, but "the Harvest House is going to be overloaded."

Back to the streets

Ed Aucoin, who suffered serious frostbite to his legs and feet over the winter, headed back out on the streets on Monday.

"I'd like to say I'll be moving into my own place, but it's basically moving out, into a tent, wherever I can set it up," he said.

"At this point a room is what I'm looking at, but rooms at my price are all taken up and a higher price, well, I can't afford, and so I'm in the middle."

Aucoin said he prefers staying in a tent to staying at one of the permanent shelters, which he and Gibson-Eagles describe as having "a lot of restrictions."

In the past, both House of Nazereth and Harvest House were "dry" shelters, which meant you couldn't stay there if you were under the influence of drugs or alcohol.

With the new beds being added to the two permanent shelters, Elliott said both Harvest House and House of Nazareth will offer "separate' damp' and 'dry' areas for their clients."

After spending the past four months working the night shift at the Humanity Project's emergency shelter, founder Charles Burrell doesn't expect he will sleep Monday night.

"I'm going to be sitting there thinking of all those people that unfortunately are outside and that breaks my heart," he said.

Burrell was giving out tents and sleeping bags to people as they left the shelter for the last time, many with no options other than going back outside.

Burrell said that when he and his volunteers set up the emergency shelter in late November, people could only commit to keeping the shelter open until April 1.

"I can't expect them to do any more because they've done so much for the community over the last four months and I am so proud of them."

He said it is disappointing that no one from the provincial government has visited the shelter at the Humanity Project over the past four months, but he is hopeful there is the political will to change something.

"The top priority is we stop talking about what we're going to do and what needs to be done and we start doing it," Burrell said.

"I never seen anybody come in here from addiction services, mental health or our government wondering how these people are doing or what was going to happen after the April 1 deadline. You need to have that will."