A single mother from Grand Bay - Westfield plans to pay $600 for each of her three sons to be vaccinated against human papillomavirus. 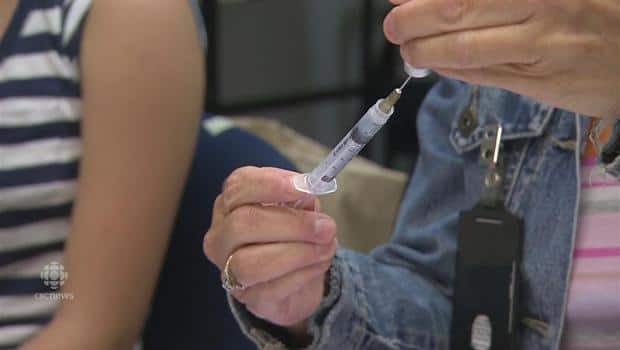 A single mother from Grand Bay - Westfield plans to pay $600 for each of her three sons to be vaccinated against human papillomavirus.

The virus is linked to the development of various cancers in both men and women.

Brittany Merrifield's 10-year-old daughter will be innoculated with the HPV vaccine at school in Grade 7. The vaccination is not covered in New Brunswick for boys.

"It's available to boys but I have to pay approximately six hundred dollars per child for the same coverage and that's a lot for any family, let alone a single mother with four children," said Merrifield, whose sons are 7, 12, and 13.

HPV vaccines are provided for adolescent girls across the country, but only British Columbia, Alberta, Prince Edward Island, and Nova Scotia cover the cost of vaccinating all children.

Merrifield says New Brunswick's decision not to offer the vaccine to boys is short-sighted.

Information Morning - Fredericton2:30HPV Vaccine
A publicly-funded HPV vaccine is not available for boys as part of the NB school immunization program. NB is the only province in the Maritimes that doesn't offer it. 2:30"They figure well, it's a sexually transmitted disease, we'll vaccinate the girls, and therefore the boys will be covered. That's assuming that every parent will choose to vaccinate their girls.

"We've seen how well that worked with the measles outbreaks recently. That's also assuming all my boys will be heterosexual which will not necessarily be the case."

Merrifield admits the risks of HPV for her sons weren't on her radar until a family member fell ill with HPV-related throat cancer.

"At that point I realized that this was entirely preventable illness. I mean, he could have died. He was extremely ill."

The office of the chief medical officer of health acknowledges the HPV risk for boys. A representative said the vaccines on offer in the province are constantly under review, but that cost is a factor in introducing new vaccines.

Merrifield's oldest son will be given the first of three injections for the vaccine in the next few months, but the younger two will have to wait.

"My 12-year-old will be done next year maybe in the spring when I can save up enough money, and Lucas, my seven-year has a couple of years until he has to have it done so I have some more time to save up."