What the judge heard at the Matthew Hines preliminary inquiry

As Matthew Hines lay handcuffed on a stretcher, struggling to breathe and in medical distress, no one inside Dorchester Penitentiary's health care room appeared to be in a rush.

As Matthew Hines lay handcuffed on a stretcher, struggling to breathe and in medical distress, no one inside Dorchester Penitentiary's health care room appeared to be in a rush.

Hines lay on that stretcher for half an hour before being loaded into an ambulance.

"Can't breathe," Hines said over and over, through laboured breaths.

During those 30 minutes, the nurse on duty didn't provide medical treatment, even though Hines was in distress and even though her observation report, written later that night, said she rendered "proper medical attention."

The nurse was later fired by Correctional Service Canada.

A 56-minute video introduced in October at a preliminary inquiry for two correctional officers, Alvida Ross and Mathieu Bourgoin, captures how quickly things escalated after the 33-year-old Hines refused to return to his cell for evening lock-up on the night of May 26, 2015.

It shows Hines being pepper sprayed at least four times — once by Ross and at least three times by Bourgoin — in less than 10 minutes and all within close range of Hines's face.

Hines was serving a five-year sentence for bank robbery.

Earlier this week, provincial court Judge Ronald LeBlanc determined Ross and Bourgoin will not go to trial on charges of manslaughter and criminal negligence causing death.

He determined the pepper spray, also known as OC, was reasonable and necessary, and it did not rise to the level of a crime.

"In this case, I have received no evidence that the use of the pepper spray was objectively dangerous in nature or that its use ran an obvious and serious risk to Matthew Hines' life," LeBlanc wrote in his decision.

Now that Ross and Bourgoin have been discharged, the judge has lifted a publication ban on the evidence presented at the preliminary inquiry — details that, until now, have been secret.

The footage shows Hines struggling with guards who were trying to move him from his unit to segregation.

In their observation reports, written shortly after Hines's death, many of the guards wrote that Hines appeared to be under the influence. There were reports of "bad acid" circulating through the prison.

The video also shows Hines being escorted by at least 10 correctional officers to a decontamination shower cell. 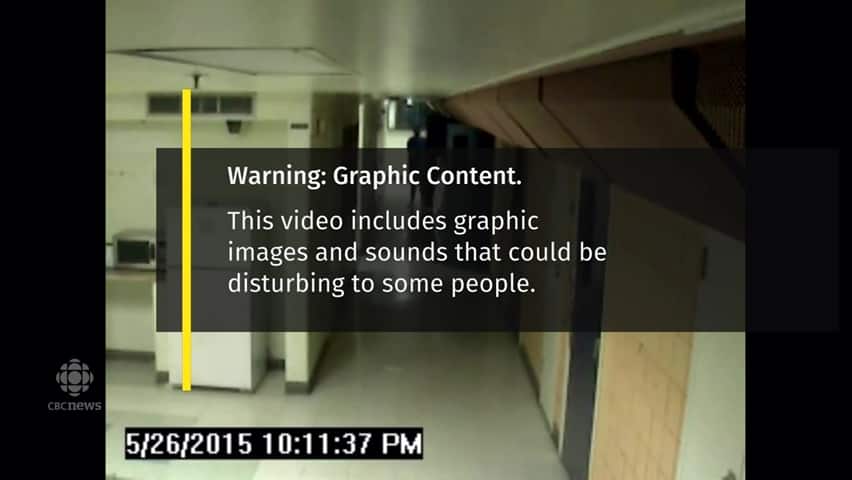 2 years agoVideo
50:11
Correctional officers Mathieu Burgoin and Alvida Ross won't go to trial on charges of manslaughter and criminal negligence causing the death of Matthew Hines. The officers are highlighted at the 05:10 mark in this video. 50:11

"Please, I'm begging you!" Hines yelled during the escort.

Someone shouted to remove the shirt that had been placed over Hines's face as a makeshift spit mask, something one officer told investigators he saw on the television show Cops.

But the shirt stayed over Hines's face. Handcuffed behind his back and unable to see, Hines was placed in the shower alone and the water was turned on.

"Rinse off!" one of the guards yelled.

With no way to see and already in a panic, lying in that shower could have felt like waterboarding, according to the federal correctional investigator.

The water was switched off. An officer removed the shirt from Hines's face and closed the shower door again, locking it.

The water was switched on again. Soon after, Hines lost consciousness and appeared to have a seizure.

Officers removed him from the cell and, minutes after Hines went into distress, placed him on a stretcher. That's when he was taken to the health care room and waited for help.

When Hines stopped breathing and his heart stopped beating during the 25-minute ride to the Moncton Hospital, paramedics pulled over on the side of the road to perform resuscitation.

Correctional officer Ryan Lavallee took over compressions so a paramedic could drive to the hospital.

The final post-mortem report concluded the cause of Hines's death "appears to be acute asphyxia due to extensive pulmonary edema following administration of pepper spray."

It can develop quickly, even as fast as within a half an hour, said Naseemuddin, who conducted the autopsy.

Throughout his testimony, the defence questioned the link between Hines's death and the pepper spray.

"I really cannot come up with any other explanation," Naseemuddin said.

Hines, he said, was "a young, healthy individual who is completely asymptomatic at the start of the episode."

He's "completely fine" until he's exposed to an aerosolized "irritant" in the form of pepper spray.

"After that happens, he develops shortness of breath," Naseemuddin said.

While it didn't appear on his final post-mortem report, Naseemuddin said in his testimony that Hines's death appears to have been an accident.

The toxicology report found three drugs in Hines's system on the night of his death — methadone and an anti-depressant called bupropion, which were prescribed to Hines, and marijuana, ruling out the possibility of a drug overdose.

In his decision, LeBlanc agreed Hines died "because of the [pepper] spray." 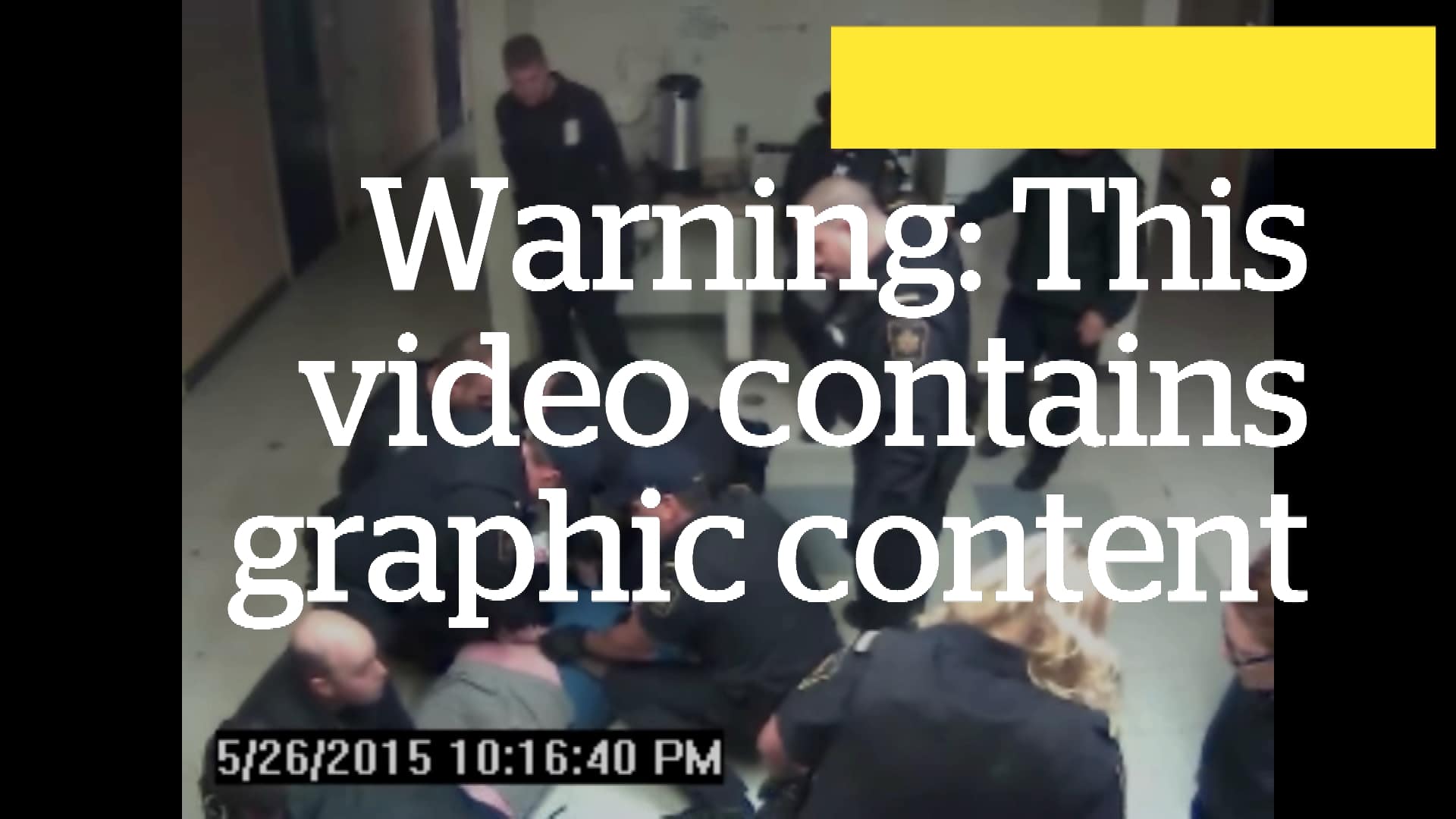 2 years agoVideo
2:10
A judge has ruled the correctional officers charged in the death of Matthew Hines will not go to trial. Warning: This video contains graphic content. 2:10

But that alone is not evidence that using pepper spray was dangerous or posed "an obvious and serious risk to his life."

"It is not the result of an act that makes it unlawful or negligent, it is the conduct leading to that result," the judge wrote.

Use of force expert weighed in

Before deciding to discharge Ross and Bourgoin, the judge heard from Joel Johnston, a use-of-force expert hired by the Nova Scotia RCMP, which took over the criminal investigation in 2016.

In Johnston's report and his testimony in court, he highlighted a number of issues with the use of pepper spray on Hines, including the risk of damaging soft tissue in the eye if sprayed at close range.

"Perhaps one of the biggest things it can incite is panic," Johnston testified.

"In other words, a person can become disoriented."

The first time Hines was pepper sprayed, he was lying prone on a kitchen floor, his hands handcuffed behind his back. He was surrounded by multiple correctional officers, including Alvida Ross, who was positioned at Hines's head.

In his observation statement, Ross said Hines wouldn't listen to verbal commands to stop resisting and warnings that pepper spray would be used.

Describing Hines as "still combative while on the ground," Ross said he sprayed one burst of pepper spray in Hines's eyes.

"It seemed to calm him down but [Hines] was still combative," Ross wrote.

Johnston struggled to understand why that spray was necessary.

"This situation did not appear to be an emergency requiring force intervention at this point," Johnston wrote in his report.

Officers should have reassessed the situation, Johnston wrote, noting that Hines was handcuffed and had also suffered a head injury.

"Was this a medical emergency? There were a number of indicators to suggest that it might be."

'Don't throw gasoline on it'

A few minutes later, as Hines was escorted into a foyer and then into a yard, Bourgoin sprayed Hines twice at "extremely close range," with only seconds between the two bursts.

Some of the first spray by Hines also contaminated Ross, and he had to leave the escort.

Hines was being unco-operative when he was sprayed, Bourgoin wrote in his observation report, saying he used the spray to try to "gain control of the situation."

According to the internal disciplinary investigation, Bourgoin said Hines was spitting at guards when he pepper sprayed him.

"When asked to describe Hines' spitting, Bourgoin described it as possibly clearing mucous from OC, and was unsure if he was actually spitting at people," the disciplinary report says.

"Bourgoin states that regardless, it was assaultive and dangerous for staff."

Spitting is one of the side-effects of pepper spray, Johnston told the court, and more pepper spray likely would have made it worse.

"If you're trying to fight a fire, you don't throw gasoline on it," Johnston testified.

Officers were 'losing patience' with Hines

In his testimony, Earle questioned whether Hines was trying to fight with guards during the escort or whether he was simply being unco-ordinated because of his size. Hines weighed 324 pounds and was six feet one inch tall.

Earle told the court his "own belief" was that officers were "losing patience" with Hines when he was pepper sprayed.

"There's some references that suggest it might have been done out of anger and frustration," he said.

While Johnston and Earle found the pepper spraying to be excessive, the state has a much higher burden when someone is accused of criminal behaviour, Judge LeBlanc wrote.

LeBlanc determined Hines was being assaultive to staff, citing numerous observation reports where different correctional officers said Hines was resisting or being combative.

He also pointed out that Correctional Service Canada's own training materials placed pepper spray as a preferred use-of-force response over physical handling.

Earle told the court he struggled with how to hold people accountable for what happened that night. Everybody, he said, has a "personal responsibility" when they see an offender in crisis. But could you discipline everyone?

"I think everybody had a personal accountability there," Earle said.

"I think everybody saw some things they should have recognized as a medical emergency."

To a lay person, not responding to the level of distress Hines was in was "disturbing," Earle added, and everybody who was there "owns some of that."

Several of the officers interviewed for Earle's investigation said they wouldn't do anything differently.

Ross and Bourgoin had no comment as they left court Friday.

For the past four years, Hines's family in Cape Breton has called for "justice for Matthew."

In a statement on Friday, family members said they still believe it's important for people to "know the truth of what happened to him."

"We also continue to trust that all of the correctional officers who saw Matthew before and during his death look in the mirror every day with the personal knowledge of what they did and did not do on May 26th."