About 700 items from Fredericton restaurant the Hilltop are being auctioned online, bringing back memories to many who considered the place an institution, especially toward the end of the last century.

Mark Sloat has been working in auction houses for 40 years, since he was 17 years old.

This week, his Auction Center in Fredericton is selling more than 700 pieces of memorabilia from the Hilltop pub, a place he remembers fondly from his 20s, when it was a club with a dance floor and disc jockey.

"For anybody who has been in Fredericton at all since the '70s, '80s and '90s, and grew up here, the Hilltop is probably indirectly responsible for their life, their divorce, their marriage or their kids," he said, chuckling, while sitting down on one of the wooden chairs that are part of the auction.

According to Hilltop owner John Kileel, the restaurant was the first beverage room in the province. It was established in 1974 by the Hill brothers, and Kileel purchased it in 1981.

"By beverage room, I mean ladies were allowed in. Prior to that, in taverns, only males were permitted inside."

It was common for people to try to buy the colourful alcohol and motor oil signs that decorated the tavern's walls, but Kileel said the pub held off from doing so, until now.

"Over the years, some of the signs disappeared. They grew legs, if you will."

During the COVID-19 pandemic, while the restaurant was closed to the public, hundreds of signs were brought down from the walls to give the restaurant a new, more modern look.

Sloat said a lot of these signs, which date back to the 1950s and 60s, don't come up in an auction like this very often.

After less than two days of bidding, some signs, which are made of enamel, are at $500, according to Sloat. 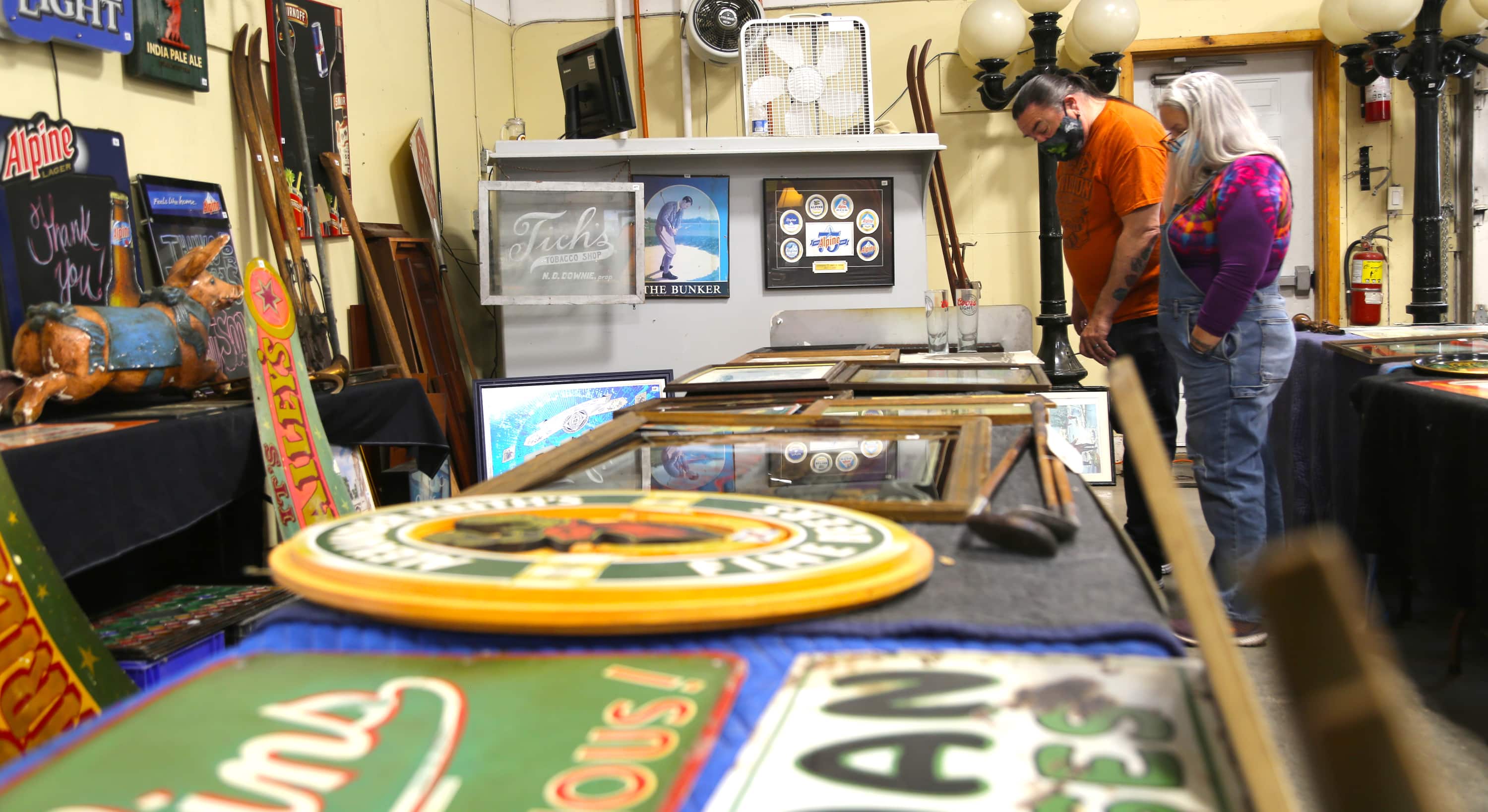 About 700 items, decor from the Hilltop pub, up for auction

26 days ago
2:29
Signs that adorned Fredericton's Hilltop pub are up for auction, and nostalgia has kicked in hard for those who were regulars at a place that became a city institution. 2:29

"Anybody with their own pub or their own bar or anybody with a bit of nostalgia in their minds, they're gonna be looking at maybe picking up one or two or something," he said.

He also expects the tables and chairs from the pub to be purchased in no time.

"If these chairs and tables could talk ... I mean, maybe what they'd say would be bad."

A road trip to Philadelphia

Many of the signs were originally purchased in Philadelphia around 1985 when Kileel and the manager of the Hilltop at the time drove down to purchase paraphernalia.

A lady who owned a warehouse with vintage items sold the signs to them.

It was sad for Kileel and some of the staff who have been the Hilltop since the '80s to take the signs down.

For Sloat, auctioning off items that bring back memories is always fun.

"But it would have been more fun to do in a live auction because sometimes people lose their minds," he said.

Since 1993, the Auction Centre, which he bought more than 30 years ago, has been hosting auctions every Thursday and garnering a crowd of about 150 to 300 people.

"It has been a social event. It was like going to the market on Saturdays. And with all that is going on now with COVID it's been missed by a lot of people, including myself."

Since June, his auctions have taken place online.

"My wife would be the first one to say, I am not a computer guy. With online auctions it takes much longer. People take longer to come pick stuff up."

But Sloat said the auctions reach audiences who wouldn't be able to sit down in a warehouse on Thursdays for an hour to buy something.

For example, people all over the Atlantic provinces and Alberta have called to inquire about the Hilltop memorabilia.

The auction that includes Hilltop items ends on Thursday at 1 p.m.