New Brunswick Finance Minister Blaine Higgs faced a hostile group of about 400 public service retirees in Saint John on Wednesday as he tried to build support for switching to a shared-risk pension model.

Apologizes for lack of consultation on proposed shared-risk model 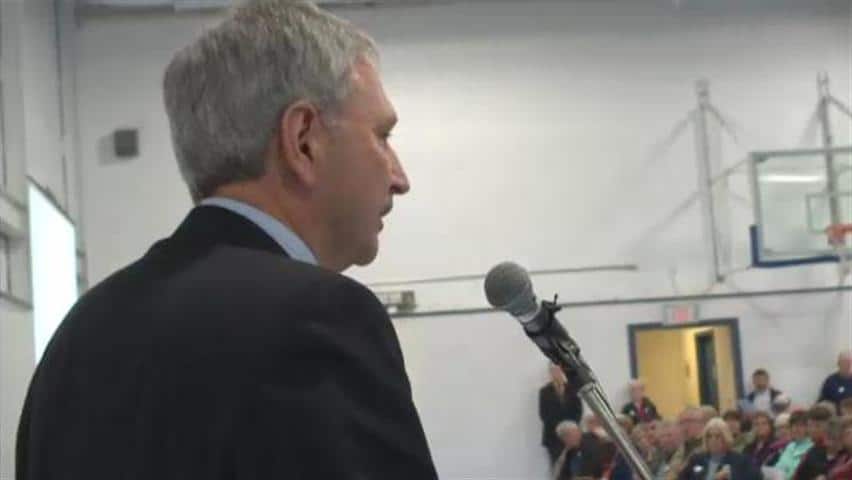 New Brunswick Finance Minister Blaine Higgs apologized to a roomful of angry retirees in Saint John on Wednesday, acknowledging government has not properly consulted them over pension plan changes.

"We messed up in the communication," said Higgs. "So we're trying to fix that."

Higgs is barnstorming New Brunswick, visiting seven cities in four days to try and reassure retired civil servants the province's new shared-risk pension model will not hurt them and that the changes are necessary.

But suspicion and anger among the estimated 400 people who attended the first meeting in Saint John ran high, with several accusing the provincial government of imposing changes without consultation or negotiation of any kind.

"I do not want the government to reflect that they have consulted with us because they have not," said Deborah McCormack to a rousing ovation.

McCormack is a former health department employee who has been organizing opposition to pension changes.

Higgs faced similar hostility from the estimated 1,000 people who gathered for the information session in Fredericton on Wednesday night.

Will lose protection against inflation

Under the current plan, the risk of any market downturns is borne by the provincial government alone. Under the reforms, the risk would be shared by both sides.

The proposed model, unveiled last May by Premier David Alward, also includes increased contribution levels and higher age of retirement phased in slowly over a period of time.

Government officials have previously said the pension changes would not cut the benefits in place for retirees.

But a government actuary at the Saint John meeting acknowledged cost of living increases will be eliminated for pensioners and instead be dependent upon market performance.

Higgs did not disagree with the angry crowd, saying government communication of pension changes "left a lot to be desired."

The Public Service Superannuation Act (PSSA) currently has a $1 billion shortfall, which is expected to get worse with people living longer and interest rates at historically low levels, Higgs has said.

The PSSA plan covers employees who work directly for government departments and NB Power and included 13,441 pensioners as of March 31, 2012. Their average annual pension was $20,603.

In addition the PSSA has 19,611 active contributors.

The government wants to move the $4-billion PSSA plan to the shared-risk model first, followed by the teachers' $4.2-billion plan, the crowd was told.

The government hasn't had time to deal with the teachers' plan yet, officials said, to boos and cat calls.

Several unions that belonged to cheaper defined contribution pension plans signed onto the reform right away, but the province is now moving to force others in as well.

Combined, the seven defined benefit plans cover nearly 57,000 current and former government employees, a group that represents 11 per cent of the entire voting age population in the province.

Higgs listened to a litany of complaints about a lack of information from government about what the changes will mean and attempts to portray pensioners as spoiled and privileged.

"I find it especially distasteful having been someone who earned my pension in Fredericton to be referred to as a whiner by someone who speaks on behalf of government," said retiree Sharon MacFarlane, a former vice-president of finance at NB Power.

Meetings will also be held in: