A new Heritage Minute honours the wartime contributions of New Brunswick's storied North Shore Regiment, with a focus on Maj. Archie MacNaughton, in time for the 75th anniversary of the D-Day landings in Normandy.

Archie MacNaughton 'symbolic of all those who just, without question, went over and risked their lives'

A new Heritage Minute honours the wartime contributions of New Brunswick's storied North Shore Regiment just in time for the 75th anniversary of the D-Day landings in Normandy.

The short film, by Historica Canada, focuses on the story of Maj. Archie MacNaughton, a Black River Bridge farmer who twice left home and family to serve in battle — first as an enlisted man in the Great War and then again as a commissioned officer in the Second World War.

He was killed in action while leading "A" Company of the North Shore Regiment during the June 6, 1944, invasion by Allied forces of Normandy.

Historica Canada president Anthony Wilson-Smith calls MacNaughton the prototypical "quiet Canadian" who was prepared to do whatever it took for king, country and family.

He was a person who by no means had to go to war.- Anthony Wilson-Smith, Historica Canada president

"He was, to me, symbolic of all those who just, without question, went over and risked their lives," Wilson-Smith said.

Past Heritage Minutes, often-nostalgic history videos that are about 60 seconds long and are shown online and on television, have featured well-known Canadian heroes, including Sir John A. Macdonald, Viola Desmond and Terry Fox.

This time, Historica Canada wanted a less well-known story. And it found everything it needed in the North Shore Regiment and Archie MacNaughton.

"He was a person who by no means had to go to war," said Wilson-Smith.

"He was a World War I veteran. He was in his forties. The maximum age you could sign up was 45. He was 43 when he went. He had a wife and children at home. He was a farmer and everyone depended on him. But when his country called, he had to go."

MacNaughton enlisted during the First World War in 1915 at 19 and saw action in Belgium and France. He survived the experience to return home in 1919 to work the family farm in the Miramichi area.

He married and had two children with his wife, Grace.

But MacNaughton kept up his military training by joining the local militia. His leadership and good nature endeared him to the younger men he trained with.

When war called again in 1939, he was ready to answer. He enlisted as an officer and travelled with the North Shore Regiment to England.

A role to play

"I think it was very much a sense of obligation to the men," said Barry MacKenzie, a St. Francis Xavier University historian.

"He enlisted a second time because he thought he had a role to play there. He had trained them, and he had a duty to see this out rather than to retire, which he could have done."

Instead, MacNaughton led his men through training, earning their respect and affection.

His entire company took up a collection and gave him a gift of five pounds (more than $450 Cdn today) and a letter declaring: "We will always remember you as a commander who we trusted as a leader and who was a friend and father to us when we needed help and guidance."

MacNaughton's daughter Margie remembers vividly her father's departure. She was six years old, and her father insisted the family sit for a formal photograph before he left.

She also remembers her mother's dread at watching her husband go off to war again.

"My mother always said, no person can go through two wars and survive."

MacNaughton was killed by enemy gunfire shortly after leading his company off the exposed beach and into the nearby village of Tailleville.

One of the men who served under MacNaughton that day was radio operator Bill Savage. He was also hit by German gunfire, but was behind his commanding officer, who took the brunt of the bullets.

'He owed it to his country'

Savage's grandson Brandon is a history teacher in Miramichi, a fact he credits to his grandfather telling him the story of Archie McNaughton. 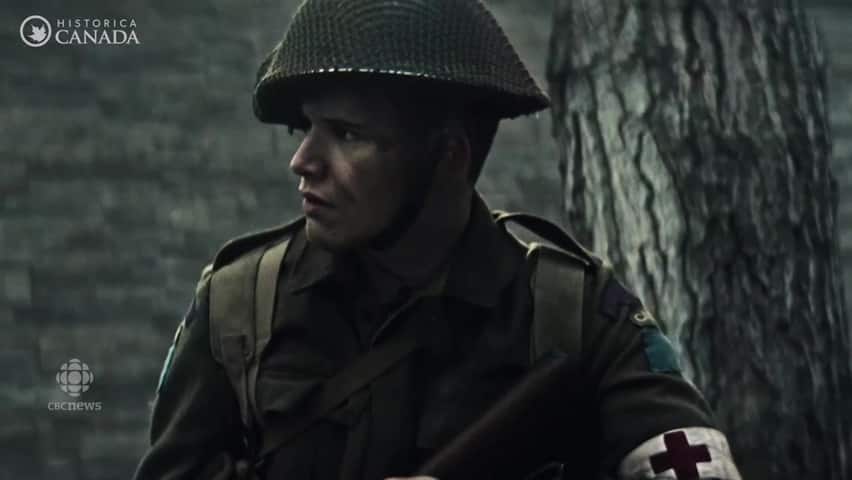 1 year ago
1:01
A new Heritage Minute is honouring the war-time contributions of New Brunswick's Archie MacNaughton, in recognition of the 75th anniversary of the D-Day landings in Normandy. 1:01

"There is so much trauma that occurs in war," said Brendan.

"And [Archie] experienced that in the First World War. He knew what he was getting into, he knew how bad it was going to be. Yet he owed it to his country, he owed it to his regiment and to his boys to see them through. And that to me is a level of dedication to a nation that is incredible."

Archie MacNaughton was 47 when he was killed, leaving behind his wife Grace, son Frances and daughter Margaret.

He is buried in the Bény-sur-Mer Canadian War Cemetery in France. The soldiers in New Brunswick's North Shore Regiment were among 14,000 from Canada who took part in the D-Day landings.