Glyphosate, a chemical widely-used to control foliage, has been reclassified as "probably carcinogenic to humans" by the International Agency for Research on Cancer. 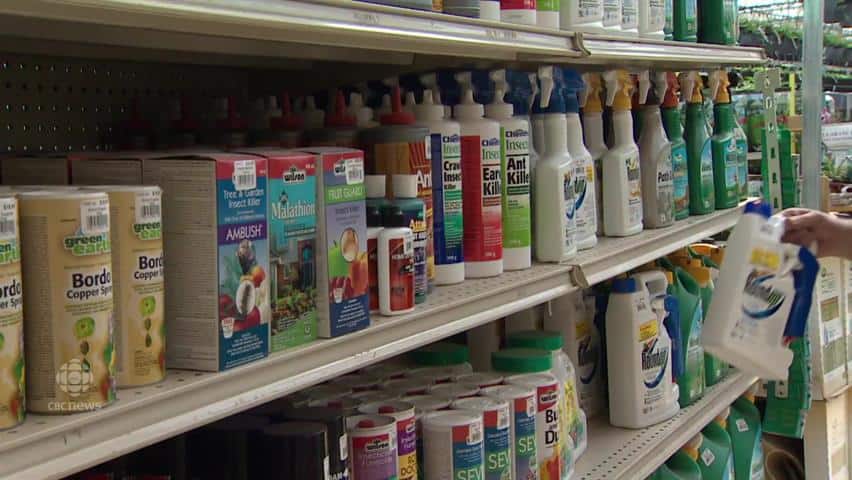 6 years ago
2:20
A chemical widely used to control foliage in New Brunswick has been declared a probable carcinogen by an agency of the WHO responsible for cancer research. Catherine Harrop reports. 2:20

A chemical long-used to control foliage has now been deemed "probably carcinogenic to humans" by the International Agency for Research on Cancer.

Glyphosate is commonly found in household garden herbicides, such as Roundup, but is also widely used to control weeds on farmers' fields, spray forests and to kill undergrowth on tree plantations.

The International Agency for Research on Cancer (IARC), a branch of the World Health Organization (WHO), asked experts from around the world to spend a year examining the data from peer-reviewed studies.

Epidemiologist John McLaughlin, who was among them, says evidence from lab tests swayed the decision to reclassify glyphosate after more than 20 years.

McLaughlin, who is the chief science officer for Public Health Ontario, notes there aren't enough studies on the effects on humans.

"Even so, it's important to know that the agent may possibly, or in this situation, probably be, a cancer causing agent, at least for a cancer, such as non-Hodgkin's lymphoma," based on the studies that considered factors such as where and how glyphosate was used, the duration of use, whether protective equipment was used, and whether it was used by itself or or in combination with other agents, said McLaughlin.

"The risks are low, however, if real, we should be concerned about it. And that's the purpose of the review in terms of overall risk assessment," he said.

"So it's an evolving process that involves all stakeholders, that includes industry, regulators and users, that we all have to be willing to be up to date, and constantly looking at fresh evidence as it accumulates."

Calls to end use in New Brunswick

New Brunswick Green Party Leader David Coon raised the issue in the provincial legislature on Wednesday, calling for an end to the glysophate spray program and its use on lawns.

Environment Minister Brian Kenny said it is a serious issue and bears studying.

Nova Scotia does not provide public funding for use of herbicides, but there is no prohibition of herbicide use by private or industrial land owners.

"We're also wiping out the diversity of our forests, we're getting rid of hardwoods, and the berries and that vegetation that is food for our wildlife too. So there are many reasons for getting rid of glyphosates in our woods," she said.

Health Canada says it is currently re-evaluating glyphosate, along with the U.S. Environmental Protection Agency, as part of a review of chemicals that were approved prior to 1995.

In the meantime, it is not considered harmful to human health, the agency says. "No regulatory authority in the world considers glyphosate to be a carcinogenic risk to humans."

The IARC "provides no new scientific data to support their conclusion which is inconsistent with recent reviews conducted by regulatory and scientific agencies around the globe," Keith said in an emailed statement.

"When considering actual usage, all national regulatory review bodies have classified glyphosate as unlikely to pose a carcinogenic risk," she said, adding that less than one per cent of lands owned or managed by J.D. Irving Ltd., receive an application of glyphosate in any given year.

The IARC's 300-page scientific report is expected to be published in the coming months.