Some Fundy fishermen not only had a close encounter with a suspected great white shark over the weekend — they rescued it.

Some Fundy fishermen not only had a close encounter with a suspected great white shark over the weekend — they rescued it.

William Hanley said it's not uncommon for porpoises or smaller sharks, like makos, to become trapped in fishing weirs or other netting, but the fish that emerged from the depths in Back Bay Harbour on Sunday morning was something new for him.

"First when I saw it, I thought it was just a little wee small shark that was only about four or five feet long," Hanley, a St. George fisherman of 30 years, recalled of the encounter just after dawn.

"Then [it] come up underneath me and that's when I realized we had a big one, the biggest one I ever encountered in the weir." 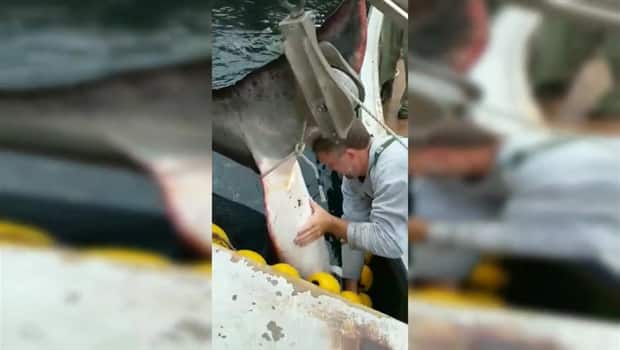 1 year agoVideo
2:16
A group of fishermen in Back Bay rescue a suspected great white shark from a fishing weir. 2:16

He figured this shark was upwards of 18 feet long and weighed more than 1,000 pounds.

Hanley's daughter, Arielle, recorded what followed on her phone.

The fishermen managed to get the shark —  seemingly exhausted from struggling to break free of the weir — into a net and pulled it to the surface near their boat, revealing what it was.

"What a massive beast," one voice exclaimed.

Hanley then tied rope around its tail fin as another voice said, "Guess what, bud, you're going for a ride."

The two-minute video doesn't capture the entire scene, which was a struggle, Hanley said.

"The makos are usually easier because they usually get the teeth in, and we just grab them, pull them up quickly, but the teeth were so sharp on that one that she just cut through the net we couldn't get her up very easily," he told Shift New Brunswick.

The shark was then lifted vertically along the boat, and the fishermen headed out of the harbour to release the fish in the bay.

"She was a little slow but she swam off," Hanley said. "She was beat."

He said it didn't dawn on him that he was touching a great white shark. He was just acting instinctively.

"I just figured we'll get [the shark] out of there, making it as quick as possible," he said. "The longer it takes and the worse it is for them."

This was one of many sharks encounters in the Bay of Fundy this year, including the Planet Earth-esque video of a suspected great white devouring a seal off Saint Andrews.