As part of the St. John River rises to "unprecedented" levels, emergency officials are warning New Brunswickers in at-risk regions to evacuate immediately.

As part of the St. John River rises to "unprecedented" levels, emergency officials are warning New Brunswickers in at-risk regions to evacuate immediately.

The flooding, now in its second week, has displaced hundreds of residents. More evacuations are underway Friday in the river's lower basin, and the water unlikely to recede for at least another five days.

"This is very much far from over for the southern half of the province," said Geoffrey Downey, a spokesperson for the New Brunswick Emergency Measures Organization.

"It's not over for the Fredericton area and other spots either. We're still well past flood stage."

The initial damage estimate is about $24 million and that's likely to increase, according to a federal Fisheries and Oceans official. The 2008 flood caused $23.3 million in damage.

It's going to get worse before it gets better

Water levels in Saint John reached a record 5.43 metres on Friday, and they're expected to hit 5.9 metres by Monday, according to the province's five-day forecast.

Mike Carr, who heads the Saint John EMO, said they are six inches away from closing all of Westfield Road. As of Friday afternoon, motorists could still leave the area by vehicle heading north through Grand Bay-Westfield.

About 1,400 residents live in the affected Westfield Road area, some of whom have already been isolated by floodwaters.

"It's an evolving and, at some times, unpredictable event," Carr said.

"We're asking people to leave while they can."

It's a similar outlook in the other riverside communities between Fredericton and Saint John. Levels should peak, in some cases at heights never seen before, by Sunday or Monday and remain high into next week.

​Officials urge anyone in communities such as Grand Lake, Jemseg, Gagetown, Hampstead, Belleisle, Oak Point, Grand Bay-Westfield, Quispamsis and Saint John to be on high alert.

Water levels in Fredericton continue to hover around eight metres, or 1.5 metres above flood stage. The forecast suggests waters could begin to recede by Tuesday.

Levels in Grand Lake are expected to increase the most in the next 72 hours, rising by almost half a metre.

As of Friday, 747 people and 309 households from across the province had registered with the Red Cross.

Earlier this week, Saint John issued a voluntary evacuation notice affecting about 2,000 residents in several neighbourhoods, and the province on Friday encouraged people to leave their homes before the weekend.

"Anyone who has not taken the necessary precautions should act now to prepare for flooding and heed voluntary evacuation warnings from local officials, including those in at-risk areas who have never experienced flooding in the past," read a statement from the Department of Justice and Public Safety.

Greg MacCallum, director of the provincial EMO, said residents need to consider their self-sufficiency if they become isolated. If they believe they will require assistance, it's best to leave while the road is dry, he said.

Rain on the way

Downey said a combination of rain and rising temperatures of about 13 C in the north won't help areas south of New Brunswick's capital city.

Meanwhile, temperatures are expected to drop overnight and hover around 8 C in the northern part of the province.

"At night you're not getting any relief, it's not dropping down far enough to slow down [flooding]," Downey said.

The province can also expect between 20 and 30 millimetres of rain in the north.

In the central part of the province, about 15 to 25 millimetres are expected, with 10 to 20 millimetres anticipated in the south.

Premier Brian Gallant announced on Thursday the province has enlisted help from the Canadian Coast Guard during the worst spring flood in over 80 years. The coast guard has since arrived and is working with the provincial EMO.

The province said Friday six Department of Fisheries and Oceans boats and one coast guard patrol craft have been deployed in the Grand Lake area. Another patrol craft will be stationed in the lower St. John River, and a Transport Canada Dash 8 aircraft will conduct surveillance over Grand Lake.

Keith Laidlaw, a senior response officer with the coast guard's environmental branch, said there are four boats at the coast guard base in Saint John. Some of the vessels have already been dispatched to the Grand Lake area.

"The boats are always ready to deploy," he said. "They are emergency response vessels."

"That is part of us getting up to their emergency operations centre, to find out exactly what kind of tasks they need done," he said.

"We could assist in various different ways."

The province said the first priority is to provide emergency evacuations for people in need of medical care and those who are unable to leave safely on their own.

Delivery of supplies or transport to pre-scheduled, non-urgent appointments will be subject to vessel availability.

The Trans-Canada Highway between Fredericton and Moncton remains closed, and officials said it's unclear when it will reopen.

Motorists will be detoured to Route 1 at River Glade and to Route 7 at Oromocto.

Asked why the highway wasn't originally built higher, Ahmed Dassouki, director of operations with the Department of Transportation and Infrastructure, said part of the problem is that the province is seeing "unprecedented" water levels.

"They would have built [the highway] to the best data they had at the day," he said during a news conference Friday. 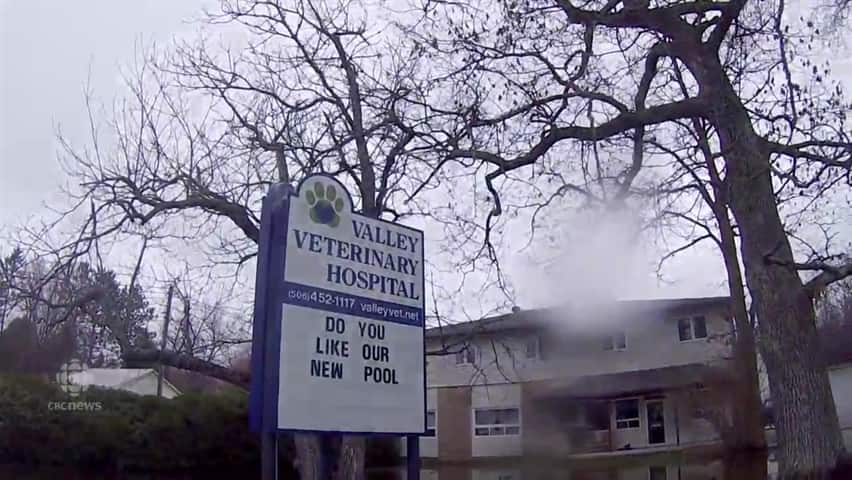 No stopping this veterinarian from help pets

3 years agoVideo
0:55
Dan Cartwright is getting used to hopping into his rusty 2007 Corolla and plowing through a pool of water to reach sick cats and dogs at their homes. 0:55

More than 140 provincial roads, bridges and culverts have been affected by flooding, including about 80 road closures. Dassouki said they are strongly considering closing Route 10 between Fredericton and Youngs Cove.

All but one of the province's river ferries has ceased operating, the exception being Gondola Point crossing in Quispamsis.

Fredericton Mayor Mike O'Brien said the city is willing to offer support to Saint John by providing public transit buses, command posts and any other kind of expertise if needed.

The mayor said the cost of those resources doesn't matter in times of crisis.

"Our hearts go out to the folks downriver and the good folks in Saint John as well," he said. "Stay safe and stay strong Saint John."