The man who shot and killed four people in Fredericton was in and out of a delusional state where he tried to punch a nurse, thought the prime minister was speaking about him on TV, and believed he could will the RCMP to arrest his judge and lawyer.

Matthew Raymond thought everyone was against him, quadruple murder trial told

The man who shot and killed four people in Fredericton was in and out of a delusional state where he tried to punch a nurse, thought the prime minister was speaking about him on TV, and believed he could will the RCMP to arrest his judge and lawyer.

The psychiatrist who treated Matthew Raymond at the Restigouche Hospital Centre described his psychosis improving or worsening depending on whether he was medicated.

Raymond, 50, shot and killed Donnie Robichaud and Bobbie Lee Wright, then Fredericton constables Sara Burns and Robb Costello when they responded to a call of shots fired at 237 Brookside Dr. on Aug. 10, 2018.

The 50-year-old has admitted to the killing but pleaded not guilty. His defence lawyers are arguing he was not criminally responsible on account of mental illness.

On Friday, Dr. Ralph Holly, called to testify as a defence witness, said he has diagnosed Raymond with schizophrenia.

Holly said he can't testify about criminal responsibility, as Raymond would not talk about the shooting with him.

"I followed him for almost a year. Every time I tried to mention [the shooting] ... he would try to avoid it." Holly said. He also doesn't know if he feels guilty or remorseful.

Holly testified he first began seeing Raymond in October 2019, after he was found unfit to stand trial. His first step was to interview Raymond, make sure he was not malingering or faking his illness, then diagnose him and find a treatment plan.

Holly said he doesn't believe it's possible Raymond is faking his illness. He said Raymond doesn't believe he's mentally ill, he refuses to take medication and has symptoms that are impossible to fake such as only sleeping for one hour every 24 hours at the height of his psychosis.

The Crown and defence agreed Raymond had a mental illness at the time of the shooting. This means to get a not guilty verdict, the defence must prove to the jury, on a balance of probabilities, that Raymond's mental illness either stopped him from knowing the nature and consequences of his actions or knowing what he was doing was wrong.

Holly said when he first interviewed Raymond, he was "agitated." He accused Holly of being a "fake doctor" and of working with the government.

"He thinks everyone is against him," Holly said of Raymond's state at the time.

Staff began giving Raymond anti-psychotic medication against his will, and he improved, Holly said.

He was sleeping well and his concentration was better, but that was short-lived. A month after the mandatory treatment order expired, Raymond relapsed, Holly said.

Raymond deteriorated to the point where he was barely sleeping. He was pacing back and forth in his room, and refusing to shower.

"He was fighting with me, 'I have no mental illness,'" Holly said.

In January, Raymond was sent to the Review Board, a provincial tribunal that decides treatment for people found unfit or not criminally responsible. Holly testified at that hearing, and the board made another mandatory treatment order which lasted until Raymond was found fit earlier this year.

Holly testified he arranged for monthly injections to continue as Raymond is going through the trial.

Defence lawyer Nathan Gorham asked Holly to look at Raymond in the prisoner's box and describe his demeanour compared to how he was. Raymond sat quietly in the box, looking down.

Gorham asked what happens with the delusions when someone is no longer psychotic and has been treated.

Holly said "it's a process" that's different for every patient. A third of patients have no symptoms, a third have some, and for the rest, it could get worse.

"I can't tell you for sure if the symptoms can completely disappear." 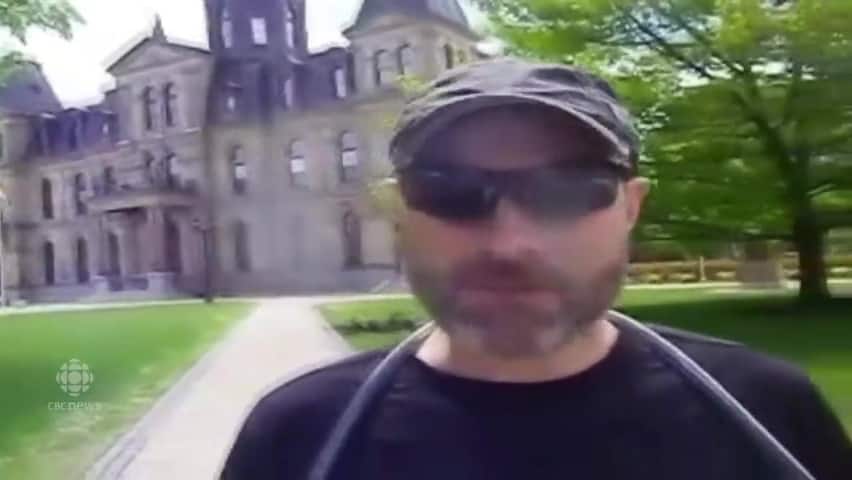 By the time Holly started treating Raymond, he had already been examined by two other psychiatrists, Dr. Scott Woodside and Dr. Julian Gojer.

Woodside found Raymond had a delusional disorder but "left the door open," for a schizophrenia diagnosis, Holly said.  Woodside wasn't able to monitor Raymond for the six months required to come to a certain conclusion of schizophrenia.

Either way, Holly said, all doctors agree Raymond had delusions, which he defined as an unwavering false belief lasting for at least one month with the absence of drugs.

Earlier on Friday, one of the jurors was discharged, leaving 11 jurors to decide the case

On Friday morning, the jurors was sent out and discussions went on without them for about four hours. They were called back at around 1:20 p.m. and told one of the jurors was discharged of his duty, but they did not get a reason.

"You should not speculate as to any reason for it," Justice Larry Landry said, adding it's not the jury's task.

The trial is expected to continue as normal with the remaining 11 jurors.

Earlier in the week, Alex Pate testified for the defence. He  went through tens of thousands of photos and videos on Matthew Raymond's hard drives and found them to be related to Masonic conspiracy theories, identification of demons, and containing Islamophobic and transphobic sentiments.

The defence is planning to call six witnesses, and the trial is expected to go until the last day of October.