Fire crews are being praised and volunteers were quick to offer support after an overnight fire destroyed a Fredericton restaurant and rooming house.

No serious injuries in overnight blaze 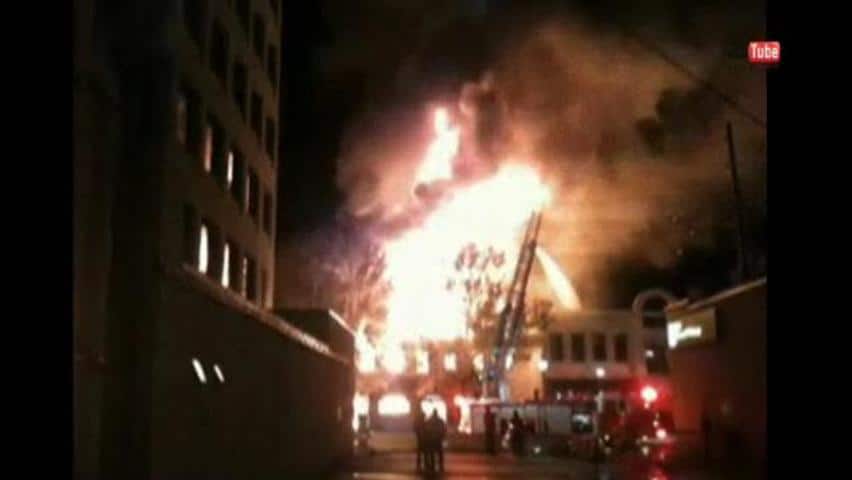 8 years agoVideo
1:40
A fire in the heart of downtown Fredericton has levelled a popular restaurant and an attached rooming-house. 1:40

A fire in the heart of downtown Fredericton has levelled a popular restaurant and an attached rooming-house.

Many are left without a job and more than two dozen people have nowhere to live tonight.

When Kristin Thurlow showed up to work on Sunday morning she had no idea the restaurant where she has worked for eight years was gone.

"I thought, why is the street blocked off? Then I looked and saw the building was burned down and I was totally shocked," said Thurlow. "I had no idea at all."

The three-storey structure that housed the restaurant and apartments was fully engulfed in flames when firefighters arrived on scene at 12:30 a.m.

"It was very windy last night," said Fredericton Fire Service platoon captain Jeff Mills. "We had a crew probably three-quarters of a block away on the rooftops putting out embers from the building. The guys did a great job to save 61 Carleton."

The building that was the home to Isaac's Way restaurant had to be knocked down. As dawn approached, fire crews were still battling the blaze.

The building served as a rooming house for 26 people. They all managed to get out safely although some were treated for smoke inhalation. Many are now in temporary housing provided by the Red Cross.

Several valuable pieces of artwork belonging to Arts New Brunswick were also in jeopardy in the building next to the fire, but were moved to a safe area.

The co-owner of the restaurant said she was initially in shock, but later felt relieved.

"No one was hurt. It was just a building," said Tabatha Smith. "The heart and soul of the restaurant still lives on and is undamaged. So I feel very positive that you'll see us again soon."

Smith said she was overwhelmed by offers of support from so many people. By Sunday afternoon, volunteers had gathered at a church hall, where they were sifting through donations for the people displaced from their homes.

"I was supposed to go out and have a turkey dinner," said volunteer Chris Graves. "But I was more than glad to put that aside. This is more important, these people need our help."

The volunteers are also planning a Thanksgiving dinner on Monday for those who are now homeless.

An investigation is underway but fire officials say it may be difficult to determine the cause of the fire, because the building was knocked down to control the blaze.