A group of young feminists in Fredericton says their high school’s dress code is sexualizing young women and they’re holding a revolt to protest it. 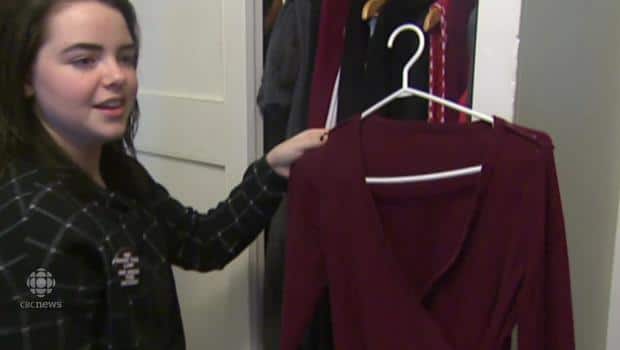 6 years agoVideo
2:13
A group of young feminists in Fredericton says their high school’s dress code is sexualizing young women and they’re holding a revolt to protest it. 2:13

A group of young feminists in Fredericton says their high school’s dress code is sexualizing young women and they’re holding a revolt to protest it.

Fredericton High School’s dress code calls on all members of the education community to dress in a modest and appropriate manner.

But the Fredericton Youth Feminists say the code unfairly targets young women and promotes the idea that sexual assault should be blamed on the woman.

Sorcha Beirne, the organization’s president, says students get kicked out of class or sent home to change for violating the code.

The group recorded a video explaining their action.

You can't tell a woman to cover up, you have to address the men who are sexualizing women.- Sorcha Beirne

"I had a teacher who called herself the ‘Dress Code Nazi’ and told the girls they dressed like sluts,” says one person in the video.

“What’s so inappropriate about my thighs anyway?” asks another.

Beirne says the policy "buys into" the hyper-sexualization of girls, the aggression of men, and what she calls rape culture.

“It's a culture that very much puts the blame on the victim,” she said.

“Women should be able to dress in whatever manner they like and expect not to be harassed or not be sexualized, not be abused.

"To address sexual assault and sexual harassment, you can't tell a woman to cover up, you have to address the men who are sexualizing women, the men who are harassing them. You can't put the blame on women."

The online petition to change the dress code now has hundreds of signatures.

Guys getting a free pass?

Taylor Hawkins, a Grade 12 student at the school, has run into the code.

“I was wearing a thick tank top and my bra strap was loose and fell down. And so they asked me to put on a sweater, basically just to cover up the bra strap. But my bra strap falling over was the issue,” she said.

Korie McCarthy said he wondered why some clothing didn’t cause any objections.

“I see one guy, he's got a marijuana hat. They're walking around supporting drugs. So I think people wearing shirts like that should take them off,” he said.

“A lot of guys wear the same things girls do, like muscle shirts or wife-beaters. And they don't get in as much trouble as we do,” she said.

CBC News spoke to Shane Thomas, the school’s principal, and asked for an interview. He told the reporter to leave school property.

Beirne says the female students want the dress policy removed and an official sexual assault policy put into place for the school district.