'It's heartbreaking': Business owners struggle to stay afloat in midst of flooding

Things are definitely not business as usual, as water continues to spill over the roads on Fredericton's north side.

Things are definitely not business as usual as water continues to spill over the roads on Fredericton's north side.

Although flooding remains stable in New Brunswick's capital city, several business owners are dealing with water in and around their place of work, halting operations.

"It's disheartening as a business," said Ryan McFarlane, manager of Crown AutoPro.  "We've got to be open to pay the bills."

He said water started pouring into his auto shop during the last week of April, forcing the shop to close for five business days. 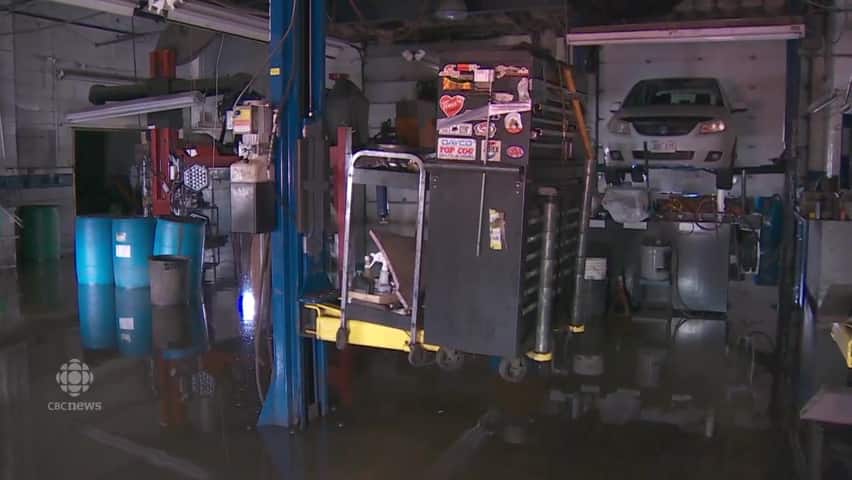 2 years ago
1:13
Businesses on Fredericton's north side continue to battle the flood. 1:13

"Friday morning ... it was a complete scramble," he said. "We had come in first thing in the morning and didn't have any water and within an hour and a half, it came up very quickly."

He said the shop wasn't expecting water levels to rise until Saturday of last week. The business still had vehicles on the property and customers booked for vehicle repairs.

"We had a plan in place but obviously that plan had to get kick started a lot quicker," he said. "Basically hit the panic button and try to get everything ready as quickly as possible for all the water."

At its peak, the local business owner said the water was about three-quarters of the way through his building with up to 60 centimetres of water inside.

Water levels have since dropped but McFarlane still doesn't know whether his business will be open on Monday.

Each day he's been coming into the shop and notifying customers of the current situation. Rescheduling appointments has created a backlog but McFarlane hopes to look after people as soon as possible.

"It's a complete inconvenience for them [customers] … we're 10 days in now, so it's difficult," he said.

McFarlane said part of his business is made up of concrete but some flooring will need to be replaced inside.

Despite talks with his insurance company and rearranging schedules, he said there are people in far worse situations across the province.

"In the end we'll all persevere and get through this and land with both feet back on the ground again," he said.

Jaemin Kim is the owner of Riverside Convenience Plus & Laundromat, on Riverside Drive in Fredericton.

The longtime business owner knows the building is flooded, but he's having trouble determining just how bad the damage is.

He'd have to wade through waist-high water to get to the store.

But it's not just water affecting Fredericton business owners. Road closures also have a major impact.

Nicole Copage, a registered massage therapist, works part time out of her home on the north side of Fredericton.

She has only seen three clients and has had to reschedule 10 of them this past week.

"It's not looking any better for this week," she said. "I think tomorrow is going to have to be cancelled just by looking at the water right now."

The local business owner said the main issue is the road closure on Riverside Drive, just past the Ramada Hotel Fredericton. With water coming up around her house, she said this is by far the worst flood she's seen since moving in five years ago.

"The water's quite deep and a lot of people can't make it through it to get to me," she said.

"The two people [clients] yesterday told me they were going to do whatever they can possible to get here … they both made it through the water."

She said the closure has had an impact on her business and she'll have to work into the long weekend to make up for lost hours.

She's hoping to start working sooner rather than later.

"I am commission-based so if I'm not working I don't make money," she said. "It's like a full week of work right now."