A group of about 50 people marched on Fredericton City Hall Wednesday in solidarity with the We’suwet’en hereditary chiefs who are trying to stop a natural gas pipeline crossing their traditional territories.

A group of about 50 people marched on Fredericton City Hall on Wednesday in solidarity with the We'suwet'en hereditary chiefs who are trying to stop a natural gas pipeline crossing their traditional territories.

People held signs calling for the RCMP and the pipeline company to stand down and vacate Wet'suwet'en territory.

The Coastal GasLink pipeline is part of a $40 billion project that would move natural gas extracted from northeastern B.C. to the proposed LNG Canada facility in Kitimat, where the gas would be liquefied and shipped overseas.

A similar march took place in Fredericton last year after RCMP enforced an injunction on the Unist'ot'en camp on Jan. 7, 2019, which saw 14 supporters of the Wet'suwet'en hereditary chiefs arrested.

The B.C. Supreme court extended the injunction on Dec. 31, 2019, causing groups of people to once again rally together in support of the Wet'suwet'en traditional leaders.

Grand Chief of the Wolastoq Grand Council, Ron Tremblay, whose traditional name is Spasaqsit Possesom, said he understands the struggles the hereditary chiefs are facing in British Columbia.

"We're gathering here to stand shoulder-to-shoulder with them even though they live way, way out on the West Coast," Tremblay said.

Tremblay has been in similar conflicts with the New Brunswick provincial government on projects in Wolastoqey territory, such as the Mount Carleton Provincial Park snowmobile hub and the Sisson mine project.

"There's a very, very strong connection, it's that the federal and provincial governments refuse to recognize the hereditary and the traditional chief systems," said Tremblay.

"We want to educate the masses about what's really going on in this country and that we are here not as protesters but as protectors and a voice for the future generations to preserve and protect water, earth and air and for all of life to continue," said Tremblay..

WATCH: Wolastoq Grand Council Chief Ron Tremblay explains why the Wet'suwet'en peoples' fight is one that resonates in New Brunswick. 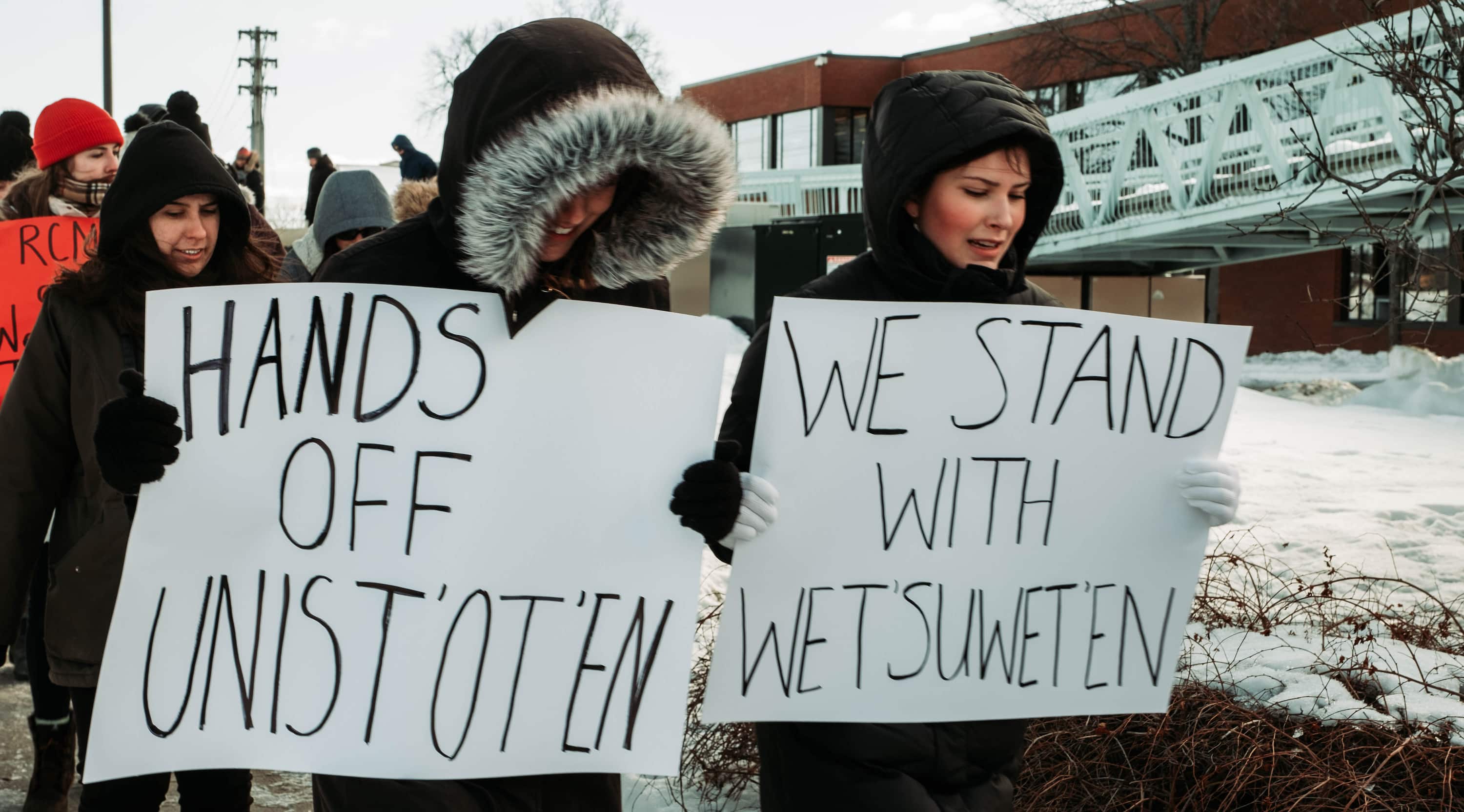 Jeremy Speller is a Mi'kmaq who drove five hours from his home community of Gesgapegiag in Quebec to be at the march.

"I think as Indigenous people we need to gather together and resist against the government and their colonial oppression that they continue to perpetuate," said Speller.

Speller, who studied in British Columbia at University of Victoria, said he feels a sense of responsibility to support the Wet'suwet'en hereditary chiefs stand.

Katalin Koller, a non-Indigenous supporter, said that a large part of reconciliation is to recognize traditional Indigenous governments.

"I think that we need to create space for Indigenous voices to be at the table before any decision is ever made, to be there and to be able to speak for their Earth brothers and sisters," Koller said. "And to be recognized as equal counterparts in the governance of our land and our resources."