A forestry worker from New Brunswick is recovering after he was chased and attacked by what he describes as a 300-pound aggressive black bear earlier this week while he was working in the woods near Oromocto Lake.

'I was scared for my life,' says Pierre Mezzetta, of Fredericton, about his 6th brush with a bear 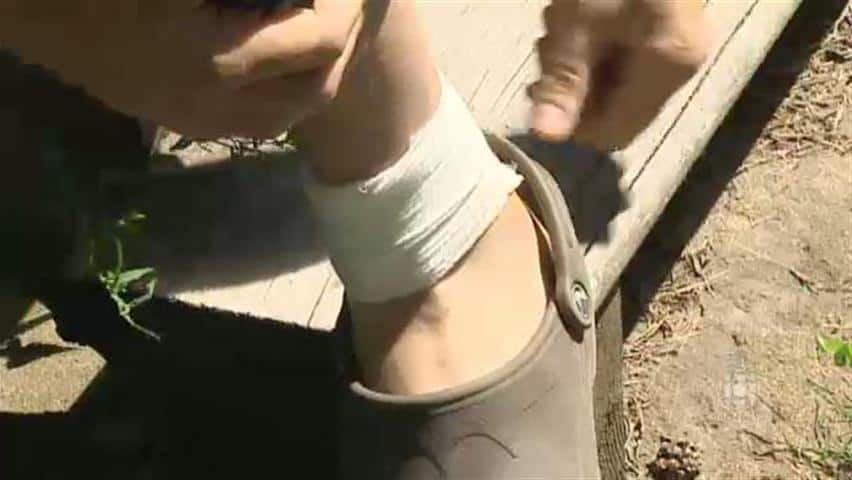 7 years ago
2:00
A forestry worker is back at work today, despite being chased and attacked by what he describes as a 300 pound aggressive black bear earlier this week. 2:00

A forestry worker from New Brunswick is recovering after he was chased and attacked by what he describes as a 300-pound aggressive black bear earlier this week while he was working in the woods near Oromocto Lake.

Pierre Mezzetta of Fredericton required some stitches and a night in hospital following the attack Wednesday, but expected to be back at work Friday.

After coming across the bear, Mezzetta made sure the bear was aware of his presence, but he ran when the animal charged him.

Mezzetta was chased hundreds of metres before climbing a tree to escape. Even though he was nearly three metres up the tree, the bear still managed to clamp its jaws around Mezzetta’s ankle.

"He jumped up, and in a blink and one bite, he had my ankle," said Mezzetta. "As soon as he had my ankle, he slipped, or let go of the tree, like he was trying to pull me down towards him.

"If he had gotten his jaws fully around my whole ankle instead of my heel, he would have had me, I would have been done," he said.

"I was scared for my life."

"When he hit the ground, he came right back up the tree again, climbed it, clawing at me, trying to bite me. He slipped again, came back around. He was frustrated, running around in circles," he said.

"Finally he gave up. Circled a couple more times, and gave up and left."

Mezzetta said it was about an hour-and-a-half before help arrived.

Danny Lunn, another forestry worker, was one of the first on the scene to rescue Mezzetta.

"Luckily he had [a] cell signal," said Lunn. "We used Google Maps to locate him."

Lunn and two others had to travel through the woods about three kilometres before coming across Mezzetta’s perch.

"But we never saw the bear," Lunn said.

The bite Mezzetta sustained by the large bear was strong enough to go through his heavy-duty work boots and puncture his skin.

Both Lunn and Mezzetta said bear encounters are not rare, but most times, the bears run off in the opposite direction.

"I've had six bear encounters this year, since June," said Mezzetta. "It's been a very bad year for bears. They're everywhere."

The overall black bear population has risen substantially in the province over the past decade, according to the Department of Natural Resources  — to about 17,000 from 13,000, around 10 to 15 years ago.

Workers often carry firearms to deal with animals while in the woods, as was the case with Lunn and the two other men who came to Mezzetta's rescue.

"Fortunately for us, we did have a firearm with us," said Lunn. "Somebody had a nuisance permit, and they do have bear spray that they carry, just in case."

The incident, while scary for Mezzetta, is not deterring him from going back into the woods.

"I'm still going back to work," he said.