A food truck owner based in Moncton says he is working more than 16 hours a day to keep up with orders, even though his usual venues — concerts and festivals — are cancelled because of the pandemic.

Even without festivals or concerts, a food truck owner says he's never been busier

Anish Kumar Narayanan's alarm goes off around 5 a.m. every day of the week, including weekends.

By 6 a.m. he's at the commercial kitchen he rents in Moncton, preparing food and packing up his food truck as he goes through his checklist: lamb, butter chicken, chicken curry.

Narayanan, who was born in Mysuru in southwest India, has lived in seven different countries across Asia, Europe and North America and has been a chef for 16 years. He has worked for food markets, restaurants, hotels and cruise ships.

After watching people enjoy his food at the Shediac Market, he decided to open his own food truck last year and became "a chef on wheels," as he likes to call himself.

Last year, he attended multicultural events in Moncton, Canada Day events, Harvest Jazz and Blues in Fredericton, and many concerts.

"Food trucks basically make money in the events," said Narayanan, who is a father of two young kids.

But this year, because of the COVID-19 pandemic, most events have been rescheduled or permanently cancelled.

Even so, Narayanan said he's had a more profitable year, with his phone ringing off the hook for hours each day.

"It's still busier compared to last year. I think it is because the food truck is the most comfortable for [people.]"

This year, Narayanan hired one full-time and one part-time employee to help him out. But his days are usually 16 to 18 hours long, even with the extra hands.

Narayanan thinks some people are still reluctant to go into restaurants because of wait times and social distancing guidelines, so many find it easier to stop by food trucks.

"They can come, they can stand outside in an open area, they don't have to wait for more than five minutes, especially for my kind of food."

Spokespersons for Fredericton and Saint John said the cities do not regulate food trucks and do not track the number of trucks operating.

Even though there's no official way to know if more have been operating this year, Ray Harris, who is a food truck fan and a data analyst in Fredericton, has been amassing information about the trucks.

He said about 15 trucks constantly operate in Fredericton, with about seven in Moncton and five in Saint John. Their themes and flavours range from signature hamburgers and fries, to ice cream specialties, to naans and vegetarian Indian plates. 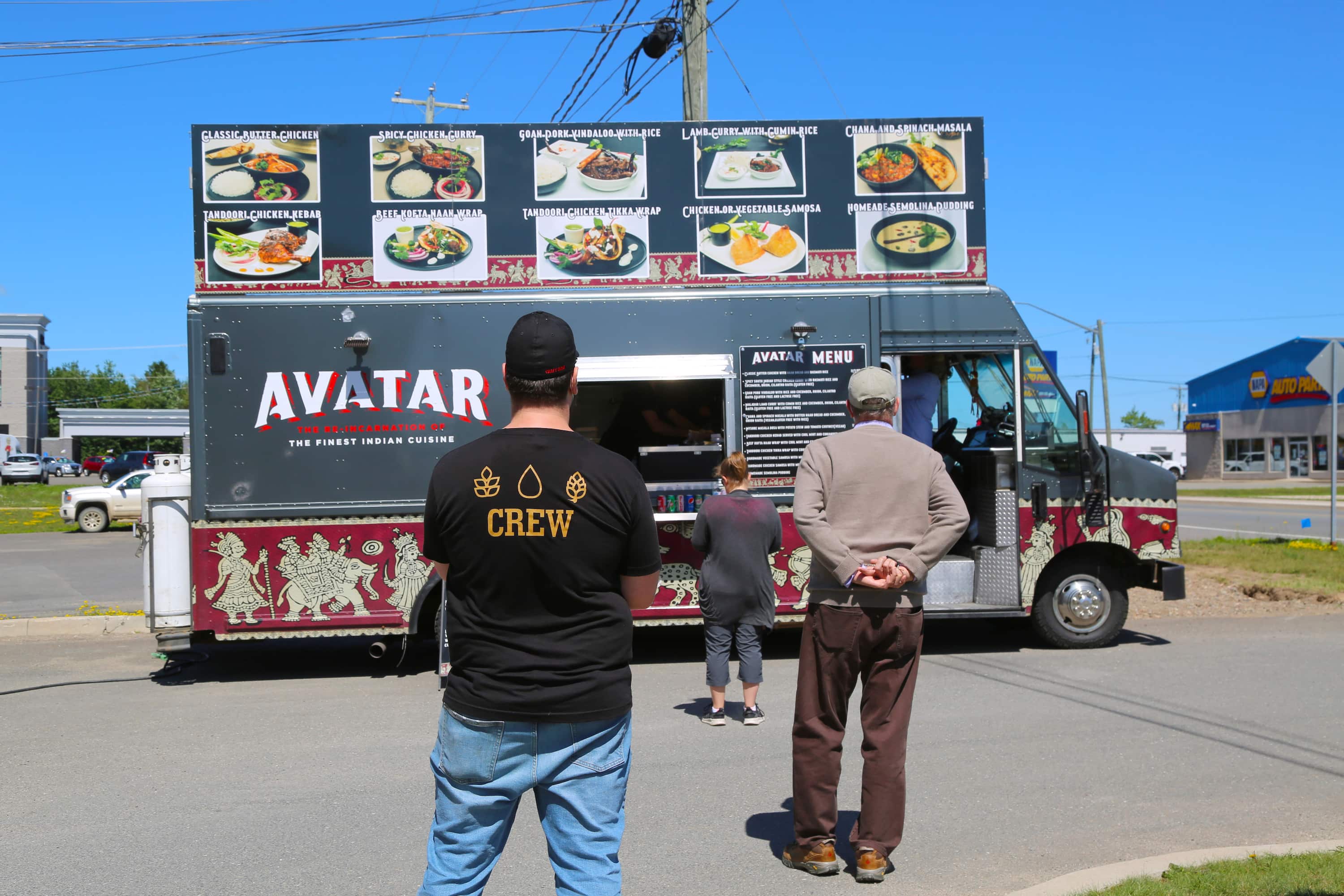 2 months ago
3:37
A food truck owner says he's working 18 hours a day to keep up with orders, even with concerts and festivals cancelled because of the pandemic. 3:37

Ashley Greenberg, a TD Bank team manager in Moncton, said she hasn't been going into restaurants since they've been allowed to reopen.

Greenberg, who's originally from Toronto, said "it's definitely easier" to pick up food from trucks during her lunch breaks.

"Since the pandemic, a lot of [food trucks] are even asking me to text or call in my order so you can pre-plan, grab it, go sit in a park."

In order to provide the Department of Health with details for contact tracing, restaurants have been required to take in private information from customers. Food trucks don't have to do that.

"I don't really want to give too much of my private information, just go in and enjoy a meal inside," said Greenberg.

Like Greenberg, data analyst Harris follows a few local food truck pages on social media to track down their schedules.

A few weeks ago, Harris was driving around Fredericton with his daughter when he came across a food truck specializing in coffee that was parked at Grimross, a local brewery in the uptown.

When he parked and walked over, he was told the truck had broken down.

After talking to some friends who had similar experiences and doing some research, he realized that in New Brunswick, you would have to follow each food truck's social page in order to know where exactly they'll be on a given day.

"It seemed right to consolidate it somehow," he said.

A few days ago, Harris launched a map that shows where food trucks will be in Fredericton, Saint John and Monton.

"Each truck has an icon of where they are going to be on that day," he said. "You can pick the day so it looks three days out if you want to foreplan a little bit. And if you actually click on a truck their menu will come up for those that I have been able to find."

According to Harris, more than 200 people have been going to the site daily. Last weekend, the site got more than 2,000 clicks.

If the clicks hold steady, Harris plans on expanding the web page and involving food truck owners so they can add their own schedules.

Narayanan said he thinks this is a great idea to help small businesses.