Food banks are not the answer: Is it time to end charity? | CBC News Loaded
New Brunswick·podcast

Food banks are not the answer: Is it time to end charity?

Across New Brunswick there are dozens of food banks and soup kitchens feeding people who are struggling — but after nearly 40 years of fundraising and food drives — the number of people in need continues to rise.

New podcast, 'Hungry for Answers', shares stories of people who depend on food banks and those who run them

Listen to "Hungry for answers," the latest episode of The Hook, an original podcast from CBC New Brunswick. You can listen to the full episode by clicking on the CBC Podcasts page or by subscribing in iTunes.

Christine Roberts never expected she would be among the thousands of New Brunswickers who depend on food banks and soup kitchens to get by.

But the university-educated, single mother sits down for a meal with her son, at the Humanity Project in Moncton, every night.

I've got little hope to get into affordable housing anytime soon ... there's just no way to get by.- Christine Roberts

Volunteers at the not-for-profit on St. George Street serve a hot meal to between 130 and 180 people every day.

Roberts found herself on social assistance after her son, who has autism, started to struggle in school.

"I eventually had to leave work because I was getting called home too much to pick up my son from school. They would modify his days to half-days and, you know, my boss didn't care my son was having a meltdown at school — and I had to go, there was nobody else."

Roberts said she is "sinking every month" trying to pay her rent of $825.

Her social assistance cheque is $971, which leaves her with just $146 to pay for groceries, utilities, transportation and anything else she or her son might need.

The Hook: Is it time to end charity?

5 years ago
Duration 0:48
In "Hungry for Answers," Vanessa Blanch visits soup kitchens and food banks and asks, is it time to end charity?

"I've got little hope to get into affordable housing anytime soon … there's just no way to get by," she said.

Charles Burrell, the founder and president of the Humanity Project, said Roberts has become a friend and fellow volunteer.

"It's a place where people are treated with love, dignity and respect and where people can find purpose and help out their community and get the help that they need," he said.

"Everybody deserves to feel like they're loved or like they belong or that they have somebody that cares for them."

Nick Saul, the president and chief executive officer of Community Food Centres Canada, operates on the same premise as Burrell.

The Toronto-based organization partners with local groups in low-income areas to build centres where people can eat, gather, and find ways to make themselves heard.

"We live in a period where we tend to point fingers at people who are struggling," he said.

"People are not poor because they're not good budgeters, or because it's a character flaw or it's a lifestyle choice — people are struggling because of low minimum wages, woefully inadequate social assistance rates, unaffordable housing and daycare."

Across New Brunswick, there are dozens of soup kitchens and food banks feeding people who are struggling — but after nearly 40 years of fundraising and food drives — the number of people in need continues to rise.

"No amount of food charity is going to solve the crisis around food insecurity in this country," Saul said.

"Food will never solve hunger, only progressive public policy will."

Saul said it is critical that people such as Roberts share their stories and that decision-makers and leaders listen.

"I think it's really important to create spaces where people can connect with others and … stand together and speak up about the larger structural issues that need to change for their lives to be better."

Sandra Olmstead, director of the Valley Food Bank in Woodstock, said her food bank opened 35 years ago as a short-term fix during the recession in the 1980s.

"It was supposed to be a five-year plan and here we are 35 years later and we're still doing it," she said.

Olmstead sees the need for more affordable housing and improved education but isn't sure how quickly food banks like hers will be able to evolve in that direction.

"We are being steered toward offering other services other than food ... but is this the job of the food bank?"

Olmstead said that with a limited budget and ever-increasing needs in her rural community, getting volunteers to do more will be difficult.

"From the food bank view we are very busy," she said. "We want to do what we do and we want to do it well."

"All the other programs … they do sound like they should be handled by Social Development. But because we're an access point that is already being used by people that are in need, I think it's a good place for it to be, but it's going to have to be baby steps."

Randy Hatfield, executive director of the Human Development Council in Saint John, agreed that food banks and soup kitchens aren't going to solve the problem of poverty in New Brunswick.

"The root cause is income inadequacy," he said. "There are insufficient incomes in people's hands to meet their nutritional needs … [food banks] have become embedded in most communities now.

"If you're on social assistance as a single employable person in New Brunswick you're eligible for $537 per month."

Change can start with a meal

Saul said that rather than drop a couple of cans into a basket at the next food drive, New Brunswickers should get involved with a local not-for-profit group and help to give people who are living in poverty a platform to be heard.

"We need to channel the compassion, and empathy that's represented by community members coming together and saying, 'Our neighbours are struggling. How can we help?" 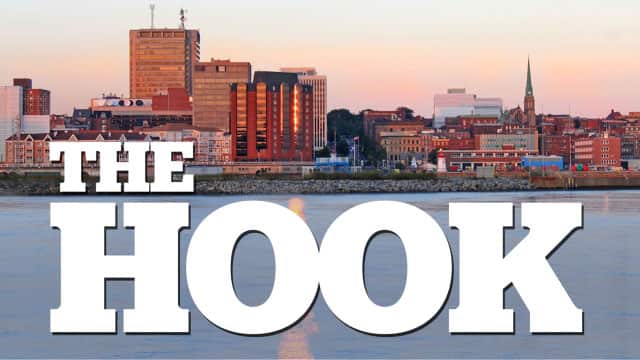 The Hook28:19Episode 6: Hungry for answers
Across New Brunswick, there are dozens of food banks and soup kitchens feeding people who are struggling. But after nearly 40 years of fundraising and food drives, the number of people in need continues to rise. So, is it time to end charity? The CBC’s Vanessa Blanch takes a closer look at food banks and soup kitchens across the province.