If the City of Fredericton wants to prevent future flooding, the province needs to step in and help, an associate researcher says.

The City of Fredericton can't prevent severe flooding and its consequences if the province doesn't step in and help, a  researcher says.

"I'm discouraged to say that the province truly has been missing in action on climate change," said Louise Comeau, a research associate at the forestry and environmental management department at the University of New Brunswick.

"For months now, they [have not been] implementing their climate change plan, which includes many investments and adaptation."

The City of Fredericton hosted a public engagement session on flood resiliency at the Fredericton Convention Centre.

Fredericton has suffered major flooding over the last two years. Water levels peaked in Fredericton on April 23 at 8.36 metres, compared with a peak of 8.31 metres last year.

For the second straight year, homes were evacuated and the Trans-Canada Highway was closed downriver from Fredericton.

With warming temperatures and higher levels of winter precipitation in the northern parts of the province, Comeau said flooding will become more frequent year after year.

"This is a recipe for ongoing and regular flooding," she said in an interview with Information Morning Fredericton.

It discusses committing to collect more data, better sharing of information among departments and educating the public.

The climate action plan also includes a commitment to help the owners of critical public infrastructure, such as the Department of Transportation, develop climate adaptation plans by 2020. The plan, which was introduced under the previous Liberal government, was adopted by the new Progressive Conservative government.

Jeff Carr, the minister of environment and local government, said Comeau's criticism is fair about the pace of change.

But he said the provincial government is making progress on implementing the recommendations, saying work on a majority of the 118 action items is underway.

He said about a dozen have been completed, but many involved multiple departments, which can slow progress.

"It's a living document, obviously, and … we'll continue to implement a number of the items and our goal is to complete as many as we can as quick as we can," Carr said. "It's a government initiative really and it's important that we don't let that fall along the wayside."

"It's not that we're not doing much. It's just that it doesn't look like the bar gets moved a lot," he said. "But there is a lot of work going on and our staff were directly involved with those 50 communities with their adaptation plan."

Tuesday's public session in Fredericton allowed residents and business owners affected by flooding to share their own flood-related experiences and mitigation ideas with city staff.

To do this, Comeau said, the city needs to also seek partnerships up and down the watershed with farmers, forestry organizations and other communities to help manage the situation.

This will allow residents and public officials to find long-term solutions to flooding and climate change.

"If we focus on short-term engineering solutions, whether it's a berm here or raising a road, we're going to miss some of the transformational opportunities that we have."

One of those opportunities is investing in more green infrastructure, such as urban forests and wetlands.

"It may not be that we can hold back volumes of water we may experience, but green space can help us do that," Comeau said.

Green space can also contribute to cooling down the city, creating space when it's not flooding and opportunities for wildlife to thrive.

At the public meeting, she said, people should be asking about their personal properties as well as local infrastructure. She said they also should be demanding a provincial process for water management.

Comeau also contends it's time to bring health and social services professionals, such as doctors, nurses, public officers of health, social workers and family resource centres, into the conversation about climate change. 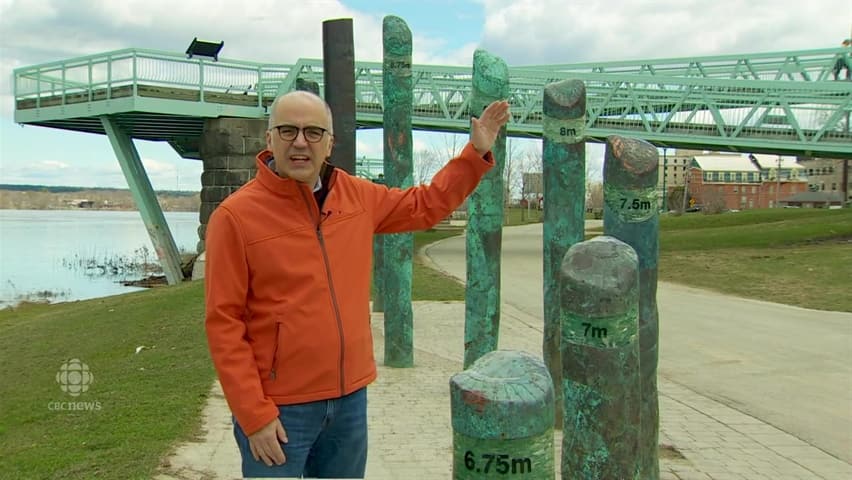 Is flooding along the St. John River the new norm?

In her report, titled Healthy Climate, Healthy New Brunswickers, released at the end of June, Comeau said climate events, such as spring flooding and the devastating property damage it can cause, affect both physical and mental health.

"There's only so much that a community like Fredericton can do on its own," she said.