A Minto company hired by the provincial government to pick up flood debris in the Grand Lake region has been inundated with work.

Alternate Waste Management crews have worked 8 days straight, and owner says it could take another 2 months

A Minto company hired by the provincial government to pick up flood debris in the Grand Lake region has been inundated with work.

Alternate Waste Management has had 25 crew members working 12 hours a day for the past eight days and is about to add a night crew so it can operate around the clock.

But owner Jack Mills predicts it will take another two months to complete the cleanup in the nine communities in his territory, which stretches from Maugerville to Grand Lake.

"We've worked on all the long weekend and it appears like we're going backwards, there's more [garbage] out," said Mills, who was in Whites Cove on Tuesday.

The flooding, which reached historic levels in the southern part of the province, forced more than 1,600 people from their homes and left devastating damage in its wake. 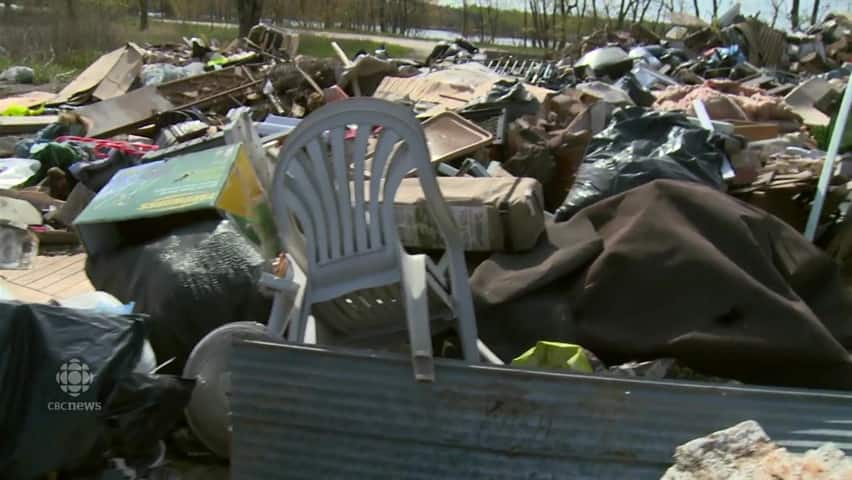 Mills said he's satisfied with the contract he negotiated with the province for the special flood debris pickup.

"They gave us a price and it was fair and we're picking up as much as we can."

Mills has 10 trucks on the road. Each one can haul about 10 tonnes, but much of the waste has to be manually fed, so it takes three or four hours to fill them.

"We usually start [at] six or seven o'clock [in the morning], get at her nice and early, and work into the evening," said one of the workers, Jason Knox.

"We've had a lot of people come out and thank us for the job we're doing," said his co-worker, Dave Taylor.

Excavator operator Alan Egers said it's difficult to see so many people so upset. But in the middle of the destruction, there is occasionally a bright spot.

"Someone just paid $200 for a little decomposable port-o-potty , a few days before the flood, and he was pretty excited when I uncovered it yesterday for him," said Egers.