Former premier Shawn Graham has resigned his seat as the Liberal MLA for Kent, four days after the province's conflict-of-interest commissioner released a stinging report into his handling of the contentious Atcon file. 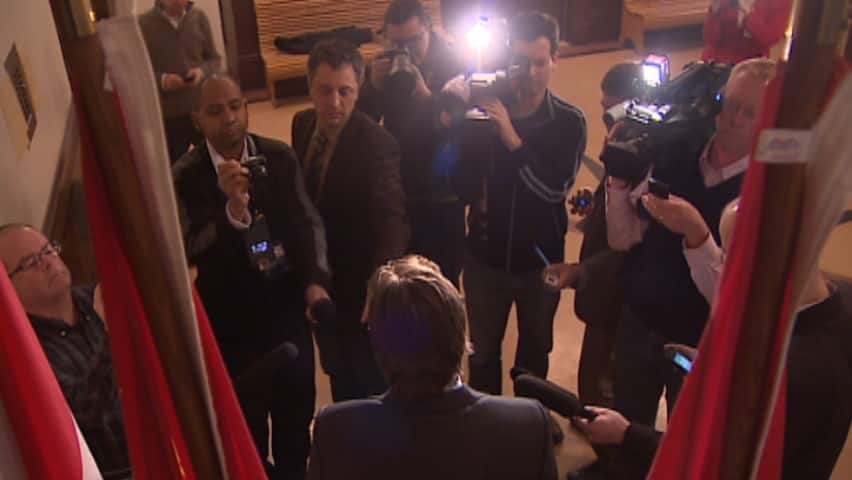 8 years ago
8:30
Former premier Shawn Graham talks to reporters about his decision to resign as Liberal MLA for Kent 8:30

Former Premier Shawn Graham announced on Friday that he has resigned his seat as the Liberal MLA for Kent, four days after the province’s conflict-of-interest commissioner released a stinging report into his handling of the contentious Atcon file.

Graham made the announcement on Friday at a news conference in Fredericton. His resignation will take effect on March 11 and that will leave the Liberals with only 12 seats in the 55-seat legislative assembly.

Retired Justice Patrick Ryan tabled his long-awaited conflict-of-interest report on Monday into how Graham handled the awarding of $50 million in loan guarantees to the Miramichi-based Atcon.

"I purposely chose to remain as a member of the Legislative Assembly until the conclusion of the matter under consideration by commissioner Ryan," Graham said in a statement.

Ryan ruled Graham had been in a conflict and said he should be fined $3,500.

Graham said he will pay the fine even though his resignation means he is outside the jurisdiction of the Members' Conflict of Interest Act.

He said he worried his continued presence in the legislature would be a distraction for the Liberals.

"I believe that as a result of these political games, my continued presence as a member of the Legislative Assembly is also an unnecessary distraction for the New Brunswick Liberal party and our new leader, Brian Gallant," Graham said in his statement.

"I have always tried to put the best interests of the Liberal party before my own. I have discussed this matter with our leader and we mutually believe that this is the best action to be taken."

Gallant said Graham was not at a caucus meeting held after the release of the Ryan report. Gallant said the caucus discussed what needed to be done following the conflict report and then he and Graham met.

Gallant said Graham asked for time to consider his options.

Tom Bateman, a political scientist at St. Thomas University, said he believes Graham wanted to put some distance between the report and his resignation.

"Perhaps the delay takes a bit of the sting out of the report itself and that he admitted that he was careless but that he was not malevolent. And the delay suggests to me that he did not want to give the report more power than he thought it actually possessed," Bateman said.

"As premier he had a very ambitious and bold policy agenda and he made little headway on that agenda. One of the problems that led to a historic defeat of the Liberal government in 2010 was the failure of the Atcon Group and the loss of provincial monies," he said.

"This now, I think, functions as the final nail in the coffin, the final judgment of the Graham era in New Brunswick politics."

The resignation means a byelection must be held within the six months and there are four party leaders without seats in the legislature.

The provincial Liberal leader was elected last fall but Gallant has not said when he would seek a seat in the legislature. The Progressive Conservatives had said in October they would not run a candidate in a byelection if a Liberal MLA stepped down to make way for Gallant.

Green Party Leader David Coon and People's Alliance Leader Kris Austin also do not have seats in the legislature.

Gallant told reporters on Friday that he has not decided whether he would run in the Kent byelction.

Bateman said Gallant may be using his time without a seat to rebuild the party that was defeated in 2010. But he said Gallant needs to make a quick decision.

"The Liberals need to take some control over the agenda a bit because they’ve been losing it," Bateman said.

"They’ve had a bad couple of weeks and they need to turn it around, a byelection that gets the leader into the assembly would be a start to turn the ship around for them."

Graham said on Monday he accepted Ryan's findings and said he was "thankful" the investigation had concluded.

The watchdog’s report examined the role of Alan Graham, a former cabinet minister and the premier’s father, who was a director with a Swedish subsidiary of Atcon, called Vänerply.

Shawn Graham told Ryan that he assumed his father was no longer involved with Atcon but never asked him. The two had decided not to discuss Atcon.

Alan Graham told Ryan that he figured his son knew of his ongoing involvement.

Ryan said then-premier Graham should have asked his father about his dealings with Atcon to make sure there was no conflict.

The Grahams have been a political powerhouse in eastern New Brunswick since the 1960s.

Shawn Graham was first elected into the New Brunswick legislature in 1998, winning the byelection to replace his father in the eastern riding of Kent.

Graham was re-elected in the 1999 provincial election that saw Bernard Lord's Progressive Conservatives form a government.

Graham was elected leader of the Liberals in 2002 and almost defeated Lord's Tories in the 2003 election.