A new report by the Conservation Council of New Brunswick is warning about the impact the proposed Energy East Pipeline project could have on whales in the Bay of Fundy, and on fisheries and tourism in New Brunswick. 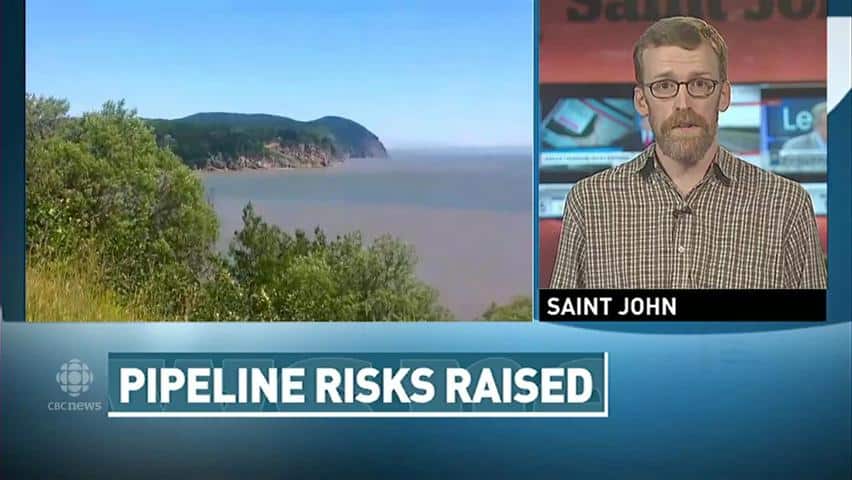 A new report by the Conservation Council of New Brunswick is warning about the impact the Energy East Pipeline project could have on whales in the Bay of Fundy, and on the jobs of thousands of New Brunswickers, if it goes ahead.

But a TransCanada Corp. spokesman disputes the findings, arguing that certain facts, such as locations and numbers, are "overlooked or exaggerated."

The proposed 4,600-kilometre pipeline would carry 1.1 million barrels a day of oilsands crude from western Canada to Saint John, where it would either be exported through a terminal co-owned by TransCanada and Irving Oil Ltd., or refined at Irving's refinery.

Matthew Abbott, the Conservation Council's Fundy Baykeeper, looked at how the proposed west-east pipeline would affect the environment of the Bay of Fundy and Gulf of Maine, and 75 coastal communities.

His report, released on Wednesday, found increased tanker traffic would cause more noise, stress and risk of collisions for endangered North Atlantic right whales, and other large mammals.

In addition, any oil spills would imperil the livelihoods of thousands of New Brunswickers working in fisheries and tourism, according to the 22-page report by the non-profit environmental group.

But when diluted bitumen is mixed with sediment in salt water it forms "tarballs" and sinks, making iit even more difficult to clean up and a threat to traditional fisheries, such as bottom-feeding lobster and scallops.

"Increased industrialization of the Bay, especially in the event of an oil spill, will damage [its] reputation and will make it harder to attract tourists in a very competitive market."

The report makes nine recommendations, including:

Less than 1 ship per day

TransCanada spokesman Tim Duboyce, however, contends the impact on right whales "is not going to be significant."

He says the proposed Canaport-Energy East export terminal is not in their "critical habitat … And that makes a huge difference."

The shipping lanes in the Bay of Fundy were already moved out of the critical habitat of right whales about 10 years ago, and since then, there hasn't been a single reported ship strike and whale populations have increased, said Duboyce.

We have looked at what we expect the impact of that to be on these marine mammals, and on other species in the Bay of Fundy and we have arrived at the conclusion that the impact is not going to be significant.- Tim Duboyce, TransCanada Corp.

He also expects the project's overall impact on marine traffic at Port Saint John will be minimal.

"We're talking about 115 arrivals and departures per year … It adds up to less than one ship per day," said Duboyce.

"We have looked at what we expect the impact of that to be on these marine mammals, and on other species in the Bay of Fundy and we have arrived at the conclusion that the impact is not going to be significant.

"It is very very important to us to proceed with this project in a way that is respectful of the environment and of the different species that inhabit the Bay of Fundy."

In April, TransCanada Corp. announced it was abandoning plans for a terminal in Cacouna, Que., due, in part, to concerns about beluga whales.

Beluga whales are found in the St. Lawrence River in the Cacouna area and a recommended change in status of the whales to an endangered species factored into the company's decision to ditch its plans for a terminal there.

The change pushed the $12-billion project back by two years to 2020.