Environmental groups calling for a rejection of the Energy East pipeline toured the Bay of Fundy coastline at the proposed end of the pipeline on Wednesday.

Greenpeace, David Suzuki Foundation officials among those who view proposed end of pipeline 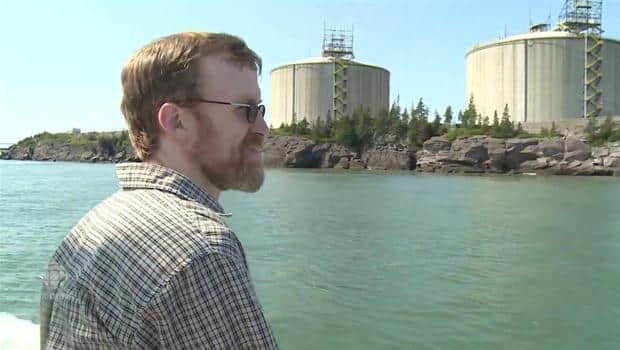 Environmental groups calling for a rejection of the Energy East pipeline toured the Bay of Fundy coastline at the proposed end of the pipeline on Wednesday.

Matthew Abbott, the Fundy Bay Keeper, who organized the tour, brought the groups to the areas where the proposed jetty would be built.

"We'll get a sense of the impacts that are already felt by industrial development from the fisheries perspective and we'll see that even though this is an area that's already industrialized," he said.

The pipeline proposed by TransCanada would bring one million barrels of western crude to the pipeline's end in Saint John every day, to be processed at the Irving Oil Ltd. refinery or be exported.

The heads of several Canadian environmental groups and their allies have called for a rejection of the Energy East pipeline.

Members of the David Suzuki Foundation and Greenpeace and several other groups toured the coastline of the proposed end of the pipeline.

Pipeline supporters point to economic growth and jobs created by the project.

But Peter Robinson, the chief executive officer of the David Suzuki Foundation, said that economic argument does not stand up to scrutiny.

"This whole notion that there's massive numbers of jobs in the pipeline field has been countered by lots of studies that show that basically once the pipeline is done, there's very few jobs that reside in the community," said Robinson.

Joanna Kerr, the executive director of Greenpace Canada, was also on Wednesday's tour and she said her group is continuing to push for the pipeline to be rejected.

"So that we can move as quickly as possible to renewables," said Kerr.

"We're an organization that's said that we have only two decades in which to get to at least 50 per cent, if not 100 per cent renewables."