In addition to 2,471 violent incident reports filed in the past 16 months, the union has also released a series of graphic images.

Graphic images accompany the latest report on violence in the classroom from the union representing New Brunswick's 3,500 educational assistants.

The union says 2,471 cases of violence were reported in the past 16 months by the frontline workers who play a critical role in supporting students with complex needs.

Some members, they keep thinking it is part of the job to be and punched and [bitten], which it's not.- Christine Robichaud , CUPE  2745

"You're the shield between the teacher and the violent child," said Theresa McAllister, provincial president for CUPE Local 2745.

The union said the high number of violent incidents points to the province's failure to protect the EAs spread across the province in a school system serving more than 97,000 students.

Sixty-three of the incidents were filed as workers' compensation claims because of the resulting medical costs, lost wages and time away from work.

And as unsettling as the photos may be, McAllister said they don't show the psychological and emotional scars of going to work and being abused by the students in your care.

"There's never enough staff," she said. "If you have one teacher, 30 kids, including four or five who are on separate [learning] plans and one EA … yeah, that's being set up for failure."

'Part of your job'

The attacks can feel personal, said McAllister, who started as an EA in the 1980s in Miramichi and left the job for union duties in 2013.

And the hurt only gets worse when school principals respond to complaints by dismissing them or their severity, she said. 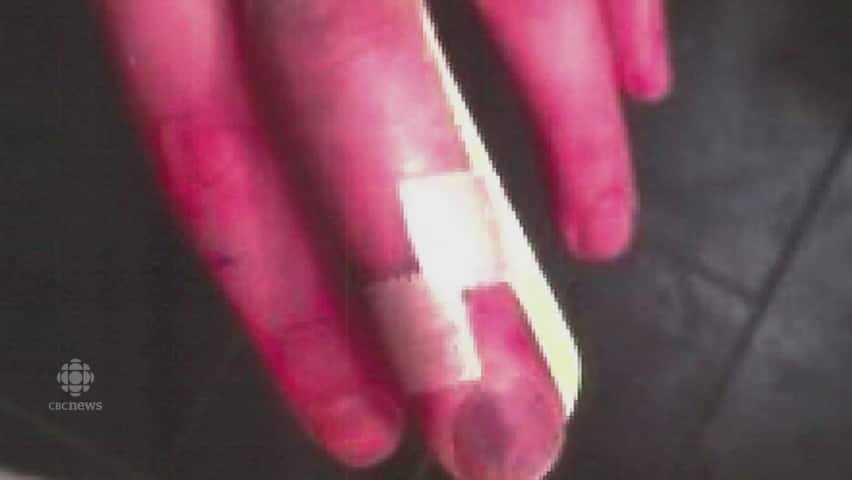 3 years ago
1:01
In addition to 2,471 violent incident reports filed in the past 16 months, the union has also released a series of graphic images. 1:01

"I was physically attacked and I was told to shake it off and go back to work," McAllister said. "That was part of my job."

Some EAs will receive a one to two-day course in non-violent crisis intervention from autism specialists, behaviour intervention mentors or student services personnel.

McAllister took the training but said it didn't work in a high school classroom.

"They weren't little boys," she said.

Christine Robichaud, a union vice-president and a school intervention worker, said she doesn't think the reports of violent incidents reflect the actual number, since not all EAs will fill out the necessary forms.

"Some members, they keep thinking it is part of the job to be and punched and [bitten], which it's not," she said.

McAllister said some EAs also fear they'll face repercussions such as losing out on hours or being reassigned to more difficult cases.

But the union said it has made progress teaching its members that they have the right to refuse unsafe work.

New Brunswick's Occupational Health and Safety Act entitles all workers to participate in decisions that affect their health and safety and the right to refuse unsafe work.

For an EA, the first step is to report the concern to a supervisor at the school, who must then investigate. An employee who isn't satisfied can go to the joint health and safety committee at the school.

If that investigation results is also unsatisfactory, the employee can report concerns to a WorkSafeNB occupational health and safety officer.

That officer will investigate and then issue orders to the workplace to mitigate the risk.

Or the officer may find no grounds for refusal to work and advise the employee to return to the job.

At that point, if still unsatisfied, the employee or the employer can appeal to WorkSafe's chief compliance officer.

"When Worksafe started seeing these rights to refuse, it was a relatively new phenomenon, even for ourselves," Richard Blais told CBC News.

After looking into the first few cases, he said, he recognized that educational assistants who were working with students showing aggressive behaviour were, in fact, facing health and safety issues that needed to be addressed.

At one point in time, you were allocated one on one. Now it's piggy-backing. I've seen a lot of cuts. You have two, three, four students in a classroom that you're responsible to assist.- Theresa McAllister , CUPE  2745

Some schools didn't have the tools to handle these problems internally.

"There are experts within the field of autism spectrum disorders who do provide guidance on how best to approach working with these students," said Blais.

"We relied heavily on the advice of some of these experts and conveyed that to the schools as well."

Blais said he believes schools are now better equipped to deal with incidents as they arise, through better communication and reporting.

Since spring 2016, he said, he hasn't heard any more appeals.

"Not to say that everything is 100 percent resolved. But there are mechanisms in place in order to remedy them at the workplace when they do emerge."

McAllister said some schools are better than others, and she wants the Department of Education to provide more training and schedule more hours to allow EAs to manage the most difficult and complex behaviours.

She said she does support New Brunswick's inclusion policies but feels they're not underpinned with enough trained staff.

"At one point in time, you were allocated one on one," she said. "Now it's piggy-backing. I've seen a lot of cuts. You have two, three, four students in a classroom that you're responsible to assist."

There are weeks when one student will have three or four different EAs, she said.

The collective agreement says a regular work week for EA is 36.25 hours but McAllister said most EAs in anglophone districts only get 30.

"You don't have collaboration time with the teacher to say he was good in this class, or he had a meltdown or whatever," she said.

That helps but it doesn't compensate for any abuse.

As a reminder that the injury reports keep coming in, McAllister pulled out her cellphone and brought up a recent picture of an EA's bitten arm.

The image was sent to her within the past two weeks.

It's hard to ignore the stacks of complaints on her desk, most filed in the past year.

"There's still a lot of work to be done," she said.