It's a scene right out of a children's book — Gabrielle Baltin and her pet duck stroll through a park filled with colourful autumn leaves.

White crested duck travels with her owner to Toronto, Montreal and Halifax

It's a scene right out of a children's book — Gabrielle Baltin and her pet duck stroll through a park filled with colourful autumn leaves.

"I didn't necessarily expect that people were going to pay so much attention to the fact that she's a duck," said Gabrielle Baltin, the owner of the white crested duck.

Baltin said she understands having a pet duck is unusual, but she doesn't see it that way.

"I hope [I'm] bringing more respect for the different kind of animal, even the farm animals," she said. "That way we don't see them only as a steak or as a piece of meat."

Baltin, who lived in Fredericton this summer, had always wanted a pet, but she often drives to Toronto, Montreal and Halifax for her job in digital marketing.

So she decided to research inexpensive animals that travel well — and crested ducks fit the bill.

"As a joke, somebody in my entourage said, '[What about] a duck? You always liked ducks,'" she said.

"If the duck can fit with my lifestyle, then why not?"

In June, Baltin adopted the unusual feathered pet from an egg and meat farm in Alberta.

Baltin said she was excited to meet her new companion, who was just a chick at the time.

"Now that she's a little bit bigger, I don't regret anything."

Baltin wanted to name the chick Happiness, but since she just started a new business she went with the name Success.

"I think it's important to repeat positive words because that brings positive things," she said.

Success is also known as "the Afro Duck" on Instagram because she has a bunching of white feathers on the back of her head. That's one of the reasons Baltin was intrigued by her particular breed of duck.

"I saw a picture of a duck who had hair on top of the head. So I'm like, 'Well, I have an afro, you have an afro. We are maybe made to get together,'" she said.

Baltin documents their life together on Instagram because people are often curious about life with a pet duck. But she said it's like any other pet.

When they travel, Success has a seat on the floor where she has access to water and food, which includes vegetables, insects and cereals. Baltin even has a leash for Success when they travel on the bus together.

But Baltin said some people don't think ducks should be kept as pets. 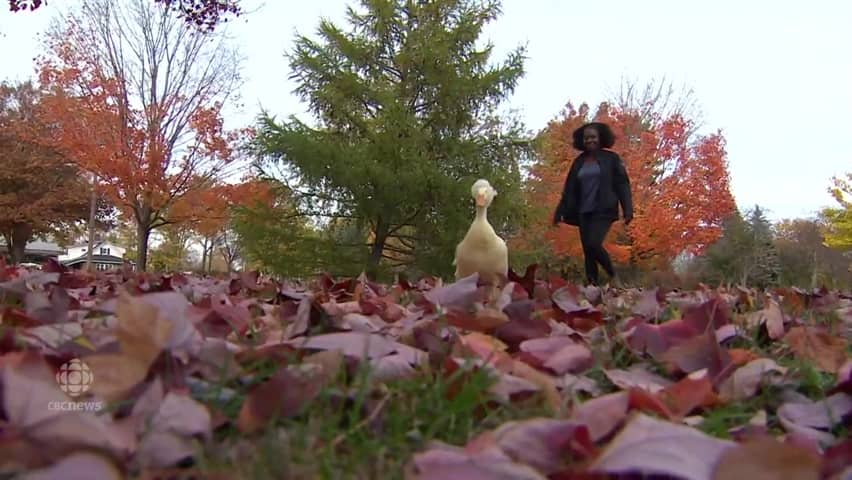 Ducks, and especially crested ducks, are not common pets, according to Sara Cook, a veterinarian at Stoneybrook Veterinary Services in St. Martins. She said they're typically used for their eggs.

However, she said that as long as the duck has proper food, water and space, it's fine to have a duck as a pet.

"I think that for some people, they can make great pets ... as long as things are managed properly, I don't see any problem with it," Cook said.

Baltin is in the process of registering Success as a therapy animal so she can volunteer in nursing homes, schools and hospitals.

"[Success] loves to interact, she loves to cuddle and she has a capacity to put away the stress of people," she said.

"And I think it's important to give care to people who need it … that's a good way to give away positive things."