New Brunswick Museum scientists are thawing thousands of frozen brown bats as part of their ongoing research into white-nose syndrome. 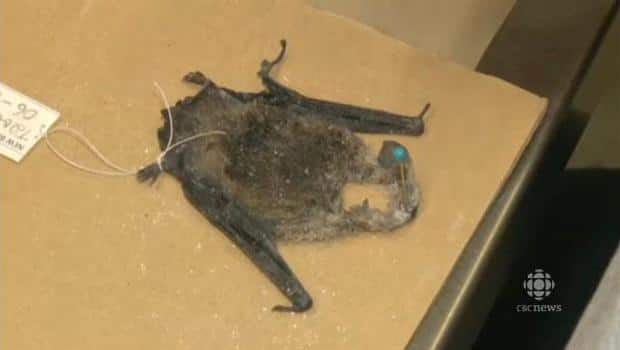 7 years agoVideo
2:08
Thousands of dead bats are being analyzed for clues to the cause of deadly white-nose syndrome. 2:08

New Brunswick Museum scientists are thawing thousands of frozen brown bats as part of their ongoing research into white-nose syndrome.

The disease has wiped out entire bat colonies across the Maritimes and continues to decimate bat populations everywhere it spreads.

Two zoology technicians are skinning the bats and taking tissue samples, which will be sent to labs at Trent University and the University of Winnipeg for genetics testing.

The hope is the data can eventually be compared to any bats that survive white-nose syndrome to figure out how to stop it from spreading, said McAlpine.

"This is again, part of helping us understand how the genetics of these populations is going to be changing. Certainly as they pass through this genetic bottleneck," he said.

But with more than 99 per cent of New Brunswick's over-wintering bats already killed off, it's unclear whether any will survive, said McAlpine.

White-nose syndrome causes infected bats to wake up early from their winter hibernation and die from starvation, due to a lack of insects to eat, or exposure while searching for food.

The disease, named for the white patches that appear on the muzzles and other body parts of hibernating bats, was first detected in a cave west of Albany, N.Y., in 2006 and hit New Brunswick around 2011.

It's believed to have come to North America from Europe.

Bats can live between 30 and 35 years and have a relatively low birth rate, with only one offspring born every year, so it could take many years for the population to recover.

The declining bat population is a serious problem because bats are a natural form of pest control, McAlpine has said.

If there aren't enough bats to eat insects and help control insect populations, that could have a serious impact on farming, pesticide use, and the price of food, he said.

The frozen bats currently being tested are from Atlantic Canada, Ontario and Quebec.

Many of them were salvaged from rabies testing in Ottawa, said McAlpine. They were destined to be incinerated, but were sent to the museum instead.

The meticulous testing takes about an hour per bat.

Canadian scientists have urged the federal government to protect bat populations by giving them endangered status.