David Coon, Kris Austin say a broader inquiry into the governance of the publicly funded college is needed

New Brunswick Green Party Leader David Coon and People's Alliance Leader Kris Austin are repeating calls for an independent inquiry into the Maritime College of Forestry Technology after it cut ties with two of its longest-serving instructors.

In the beginning of July, wildlife biologist Rod Cumberland was fired for conduct the college said was damaging to its reputation.

However, Cumberland and former colleague Gerry Redmond believed Cumberland's expression of his professional views on glyphosate was at the root of his dismissal.

Days later, Redmond, a former director of the college who publicly defended Cumberland, was told his services teaching classes and workshops would no longer be needed.

When Cumberland was fired, Coon called for the Department of Post Secondary Education, Training and Labour to make an internal inquiry into the matter, but he now says the dismissal of Redmond indicates a "clear pattern."

"The word purge started to come to mind simply because Mr. Redmond had come out in defence of Mr. Cumberland," Coon said in an interview.

"He talked about how, when he was the executive director, the kind of pressure he came under from the board of governors of the college to sanction Mr. Cumberland for speaking publicly about glyphosate."

Coon said a broader inquiry into the governance of the publicly funded college is needed.

He referred to an incident in 2015, where the chief medical officer of health at the time, Dr. Eilish Cleary, was put on leave while working on a study of glyphosate and then later terminated.

Coon said the fact that Redmond spoke publicly about pressures to sanction Cumberland while he was the executive director suggest it's more than an internal personnel issue.

"The message is that if those with professional expertise and that in any way are connected with government or our publicly funded institutions speak out based on their expertise and experience against the status quo around forestry practices in New Brunswick, they're at risk," Coon said.

Coon called on Trevor Holder, the minister of post-secondary education, training and labour, to hire an independent investigator to interview staff and board members at the college and file a public government report.

Austin, who has been calling on government for an independent review of the firing of Cumberland and cutting ties with Redmond for weeks, further accused the college's board Thursday of "an apparent conflict of interest."

Austin alleges a board member who voted to fire Cumberland later applied for and was interviewed for the position.

"It seemed to go from bad to worse," he said. "I don't know what they're doing over there but it sure doesn't smell right."

The board member could not immediately be reached for comment.

The Department of Post-Secondary Education, Training and Labour declined a request for an interview.

"Similar to the province's other public institutions, the Maritime College of Forest Technology is administratively independents," department spokesperson Sarah Bustard said in an email. "Therefore, it would be inappropriate for the [department] to comment on a human resource matter."

If Cumberland's belief regarding glyphosate was indeed the reason for his removal, Austin contends that's "counter-intuitive to higher learning.

"This type of dialogue should be encouraged, not abolished," he said in an earlier statement. 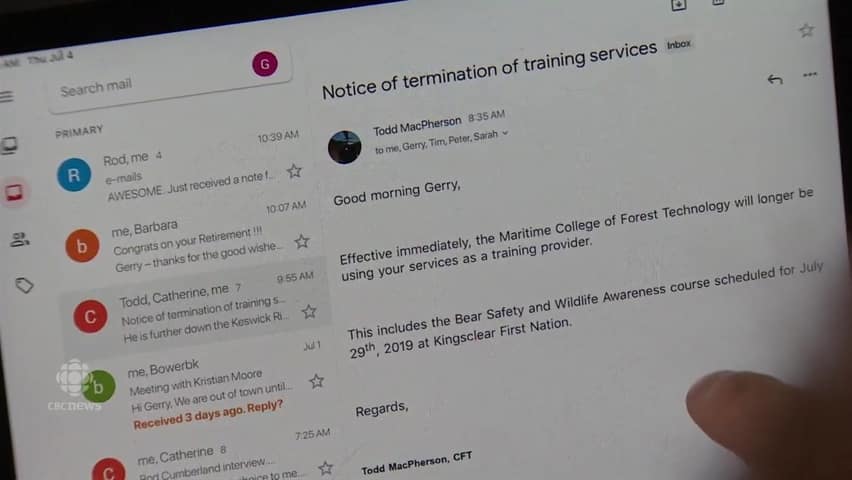 2 years ago
1:42
Wildlife biologist Gerry Redmond was told his services as a trainer were no longer needed after he came out in support of a fired colleague. The college says he released confidential information that breached his on-going commitment to the school. 1:42

He said he's concerned the college is "being overrun by industry."

"I understand industry has to play a part and has to have a seat at the table. That's obvious but when it's all becoming industry organized then then I think that's where we will lose the balance and we lose the accountability."

Austin said that New Brunswickers deserve answers about what's going on at the publicly funded college and that the results of any third-party investigation should be public.

The college, originally called the Maritime Forest Ranger School, was established as a co-operative venture of the New Brunswick and Nova Scotia governments and forest industries, according to the college's website.

Its Fredericton campus is on the grounds of the Hugh John Flemming Forestry Centre, also a co-operative venture of government agencies, educational institutions and industry groups.