There are 32 new cases of COVID-19 in New Brunswick, and an outbreak has been declared at another Edmundston care home, Dr. Jennifer Russell said at a live-streamed COVID-19 update Thursday.

There are 32 new cases of COVID-19 in New Brunswick and an outbreak has been declared at another Edmundston care home, Dr. Jennifer Russell said at a live-streamed COVID-19 update Thursday.

The update was the first since the Moncton, Saint John and Fredericton regions — Zones 1, 2 and 3 — were rolled back to the red phase of recovery on Tuesday.

They joined the Edmundston region, which was already in the red phase. The three remaining zones are in orange.

The situation in the Edmundston region, Zone 4, remains "gravely concerning," Russell said. There are now 113 cases in that area, "the largest number of any zone in the province."

Russell said outbreaks have spread to workplaces and to special care homes in the region, including a new outbreak at the Le Pavillon Le Royer.

Russell also noted that the outbreak at Parkland Riverview's Canterbury Hall care home has been declared over, with no new cases in 14 days. All residents at the facility were being vaccinated Thursday. 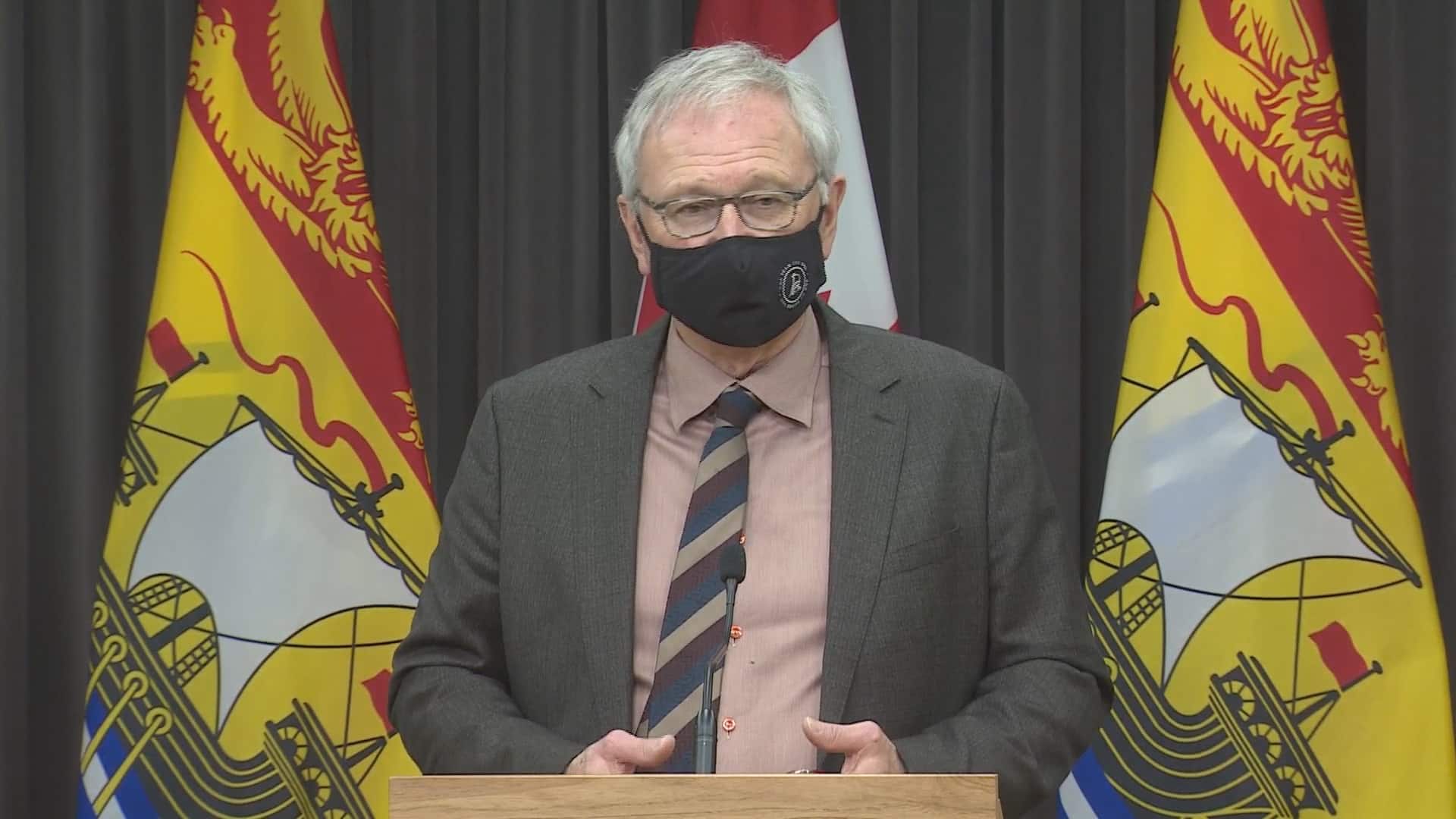 New Brunswick premier says Zones 1, 2 and 3 could go back to orange “in days” if rules are followed

The cases announced Thursday break down in this way:

All of the individuals are self-isolating and their cases are under investigation.

The number of confirmed cases in New Brunswick is 1,057, with 719 recovered and 324 currently active cases. There have been 13 deaths, and three patients are now hospitalized, two of them in intensive care.

There have been 10,436 doses of the COVID-19 vaccine administered in New Brunswick, with 2,567 people fully vaccinated with two doses and 7,339 doses held back for second doses and planned clinics.

Mount Allison University has confirmed a positive case of COVID-19 in its campus community.

In an email to students and staff Thursday, the university said it is the first positive case this term and the second since the start of the pandemic.

"At this point there are no other confirmed cases related to Mount Allison," Anne Comfort, acting vice-president of international and student affairs, said in the email.

The individual is an "off-campus member" of the Mount Allison community, Comfort said. "They are asymptomatic, have been self-isolating by themselves, and will continue to self-isolate."

Contact tracing is underway, and Public Health will contact anyone who needs to take further precautions, she said. 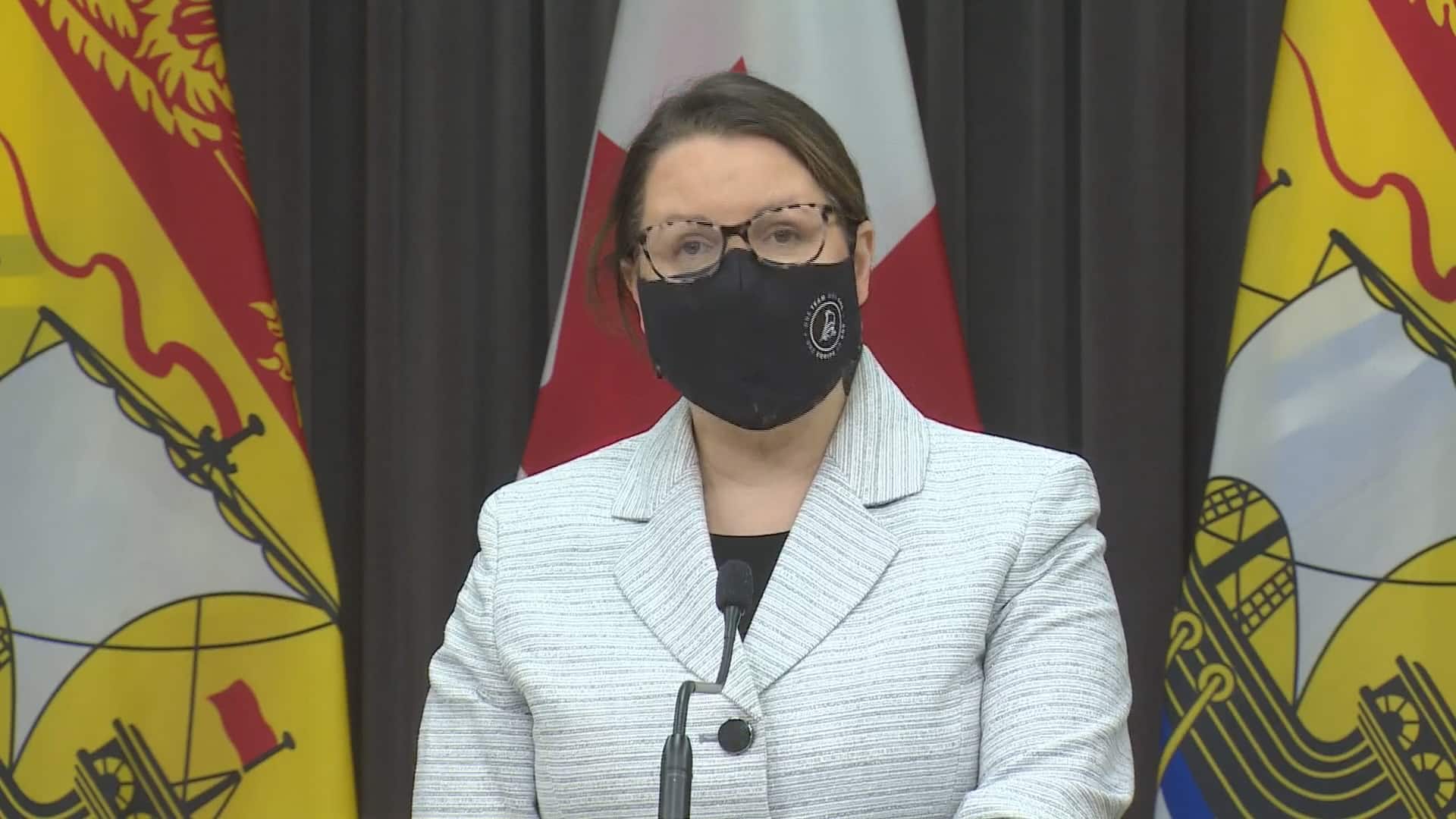 Not aware of student-to-student transmission: Russell

Dr. Jennifer Russell, the chief medical officer of health, again faced questions Thursday about the decision to keep schools open during the red phase, and about the risk to students and staff.

Asked at the COVID-19 update if she was aware of any "student-to-student transmission" in schools, Russell said no such cases have been brought to her attention.

"The only cases I've been made aware of are adult-to-adult transmission among staff in schools or adult-to-child," Russell said, adding that doesn't mean student-to-student transmission has not happened.

Under the revised red phase rules, if a positive case of COVID-19 is confirmed at a school, the school will be closed for a minimum of three days to allow for contact tracing.

'There may be delays': Higgs on vaccines

Premier Blaine Higgs provided an update on the province's vaccine rollout at Thursday's briefing, noting that the province continues to roll out vaccines "as they become available."

But that availability has been hampered recently, with no shipments of the Pfizer-BioNTech vaccine this week and reduced shipments expected next week.

Because of that, "some facilities have had to reduce the number of vaccines that will be administered," Higgs said Thursday.

"There may be delays … this is why very early on in the process we set aside a number of vaccines, so that everyone who received their first dose could receive second dose and be fully vaccinated."

More than 1,300 people were to receive their first dose of the vaccine at clinics in 10 long-term care homes that began Tuesday and concluded Thursday, Higgs said.

Clinics are also being planned on Saturday for health-care workers in the Edmundston, Bathurst, Fredericton and Saint John areas.

Why 3 zones are staying orange, for now

Three zones in the province are seeing stabilizing, low or even non-existent case numbers, the province's chief medical officer of health said Thursday.

So why are they not being eased into the least-restrictive yellow phase?

Russell said it's a case of caution mixed with proximity, noting the zones will remain in orange "until we see further progress in the surrounding red zones."

She has previously cautioned against assuming a zero case count means a region is COVID-free.

"You have to remember that case numbers are a snapshot" of what was happening seven days prior, "so even if there were no cases a week ago, it doesn't mean COVID isn't in the community today."

Russell has also previously noted that testing rates are very low in the Miramichi region, something she again pointed to at Thursday's update.

"When we see case numbers not very high in a certain area, I can't imagine they're not experiencing any symptoms whatsoever," Russell said. "So again, my message is 'Please get tested. Even if you have only one symptom. Even if it's mild.' "

Russell noted there are plans to open "four or five" more testing locations, including some in rural areas. A new assessment centre opened Thursday in Clair, in Zone 4, Russell said.

The fact that outbreaks are creeping into adult residential facilities and workplaces is a concern, Russell said.

She noted that 24 of the cases in Zone 4 are directly linked to the Nadeau poultry plant, including six of the 19 cases announced Thursday in Zone 4. An outbreak was declared earlier this week at the plant, which remains closed.

Premier Blaine Higgs, who also spoke at Thursday's update, said that a complete lockdown of the Edmundston region has been discussed and looks "likely" to happen in the days ahead.

It would be similar to what New Brunswickers saw in March when the entire province was in shutdown, he said.

Rising case numbers throughout much of the province have made it "more important than ever to follow ... and enforce" Public Health rules, Premier Blaine Higgs said Thursday.

He noted that, since Saturday, 179 house visits have been conducted to ensure people are self-isolating. There were just four cases of non-compliance.

Enforcement officers conducted 327 site visits between Sunday and Thursday, with the following results:

Public Health has identified a positive case in a traveller who may have been infectious on the following flight: