'Everyone needs to have a self-isolation plan ready,' top doctor says at third briefing in three days

Dr. Jennifer Russell, the province's chief medical officer of health, is urging New Brunswickers to "have a plan ready" for self-isolation.

More than 1,000 New Brunswickers are currently in self-isolation, Russell said at Wednesday's COVID-19 briefing, the third this week.

"I am sure that very few of these people expected that this would happen to them, and even fewer made a plan for this eventuality. But everyone needs to be ready," she said.

Russell advised residents in all zones to "make a plan today."

"Have a plan for self-isolation, how you'll arrange work, supports and other activities on short notice. Until a vaccine becomes available the risk of outbreaks will remain high."

Both are self-isolating and their cases are under investigation.

The third case is someone 30 to 39 in the Bathurst region (Zone 6). This case is travel-related and the individual is self-isolating.

There are 94 active cases in the province, and one person is in hospital.

Health Minister Dorothy Shephard also spoke at Wednesday's briefing and opened by acknowledging "frustration" with testing access and an increase in requests for testing.

On Tuesday alone, Shephard said, 1,384 requests for a test were submitted online.

Of those, 503 came from the Saint John region and 333 from the Fredericton region.

Compounding this week's increase in demand was a "technical glitch" that was preventing test requests from getting through to schedulers, Shephard said.

The glitch has been resolved, and with the addition of a new testing centre at James the Less Church, located at 1760 Rothesay Rd. in Rothesay, the delays are expected to ease.

"As we go through the next day or two you're going to see that we will be able to clear those backlogs up," Shephard said.

Dr. Jennifer Russell had earlier noted that the backlog did not affect priority testing such as pre-operation testing or results for people who are self-isolating.

Shephard also urged New Brunswickers to take care of their mental health as they head into the holiday season, taking care to exercise regularly, avoid alcohol, get plenty of sleep, maintain a regular routine and take care of one another.

"COVID-19 fatigue is real. The longer this pandemic goes on the bigger the impact COVID-19 fatigue has on our mental health," she said. "We are all in this together. It is important to know you are not alone."

Russell asks New Brunswickers to 'have a plan' to isolate

2 months agoVideo
2:49
Dr. Jennifer Russell, the province's chief medical officer of health, has asked New Brunswickers to have a plan to isolate before they get sick with COVID-19. 2:49

Another positive case at Shannex in Saint John

There are now five positive cases of COVID-19 at the Shannex Parkland facility in Saint John.

Health Minister Dorothy Shephard said Wednesday that a new case has been confirmed, after one employee and three residents tested positive earlier this week.

"There was one new [case] this morning and we have just done another round of testing, so we will know by tomorrow morning how they all turn out," Shephard said. She did not say whether the new case was a resident or an employee.

COVID-alert app in use in N.B., but little data available

The COVID-alert app is being used by New Brunswickers, but the province does not yet know how many people have downloaded it.

"We are not able to get data from the federal government on how many people in each province have it," Dr. Jennifer Russell said Wednesday when asked if there has been uptake on the app here in New Brunswick.

"But obviously, the more people who have it, the better, because it would decrease the timeframe between notifying someone that they are positive and making sure they take all the steps to protect themselves and others."

Russell said they do have data on "one-time key entries" that show the app is being used here, and further data should be coming.

The province has adjusted its single-household rule for residents in orange or red zones.

The single-household bubble can now now be extended to include a caregiver or an immediate family member who needs mental, social and/or emotional support, the province said in a release Wednesday. The caregiver can be a close friend or neighbour.

Members of this extended bubble can go to restaurants and other venues, such as church, together.

Public Health wants to be sole provider of exposure warnings

When businesses and other organizations release their own statements about possible COVID-19- exposure, it can create confusion and anxiety with the public, says New Brunswick's chief medical officer of health.

"They feel like they're doing their due diligence and it's well-intentioned," said Dr. Jennifer Russell. "But it can be very confusing for the public."

At the same time, the YMCA of Fredericton and GoodLife Fitness on Prospect Street in Fredericton released statements about possible COVID-19 exposures on their properties.

Russell said such announcements cause people to question why a business or organization is issuing an advisory and not Public Health.

"When Public Health is involved and Public Health has made the risk assessment, then you can feel confident the information shared is accurate," she said.

To minimize confusion, Russell said it would be better if businesses and organizations refrained from releasing their own statements.

CBC News spoke recently with a Fredericton business owner frustrated by the poor flow of information from Public Health about what he should do after a visitor to his store tested positive for COVID-19.

But Russell said Public Health follows a standard process to decide if the public is at risk and whether  a notice of exposure is necessary.

The process includes a detailed questionnaire, and how the questions are answered determines the risk of COVID-19 exposure to the public. 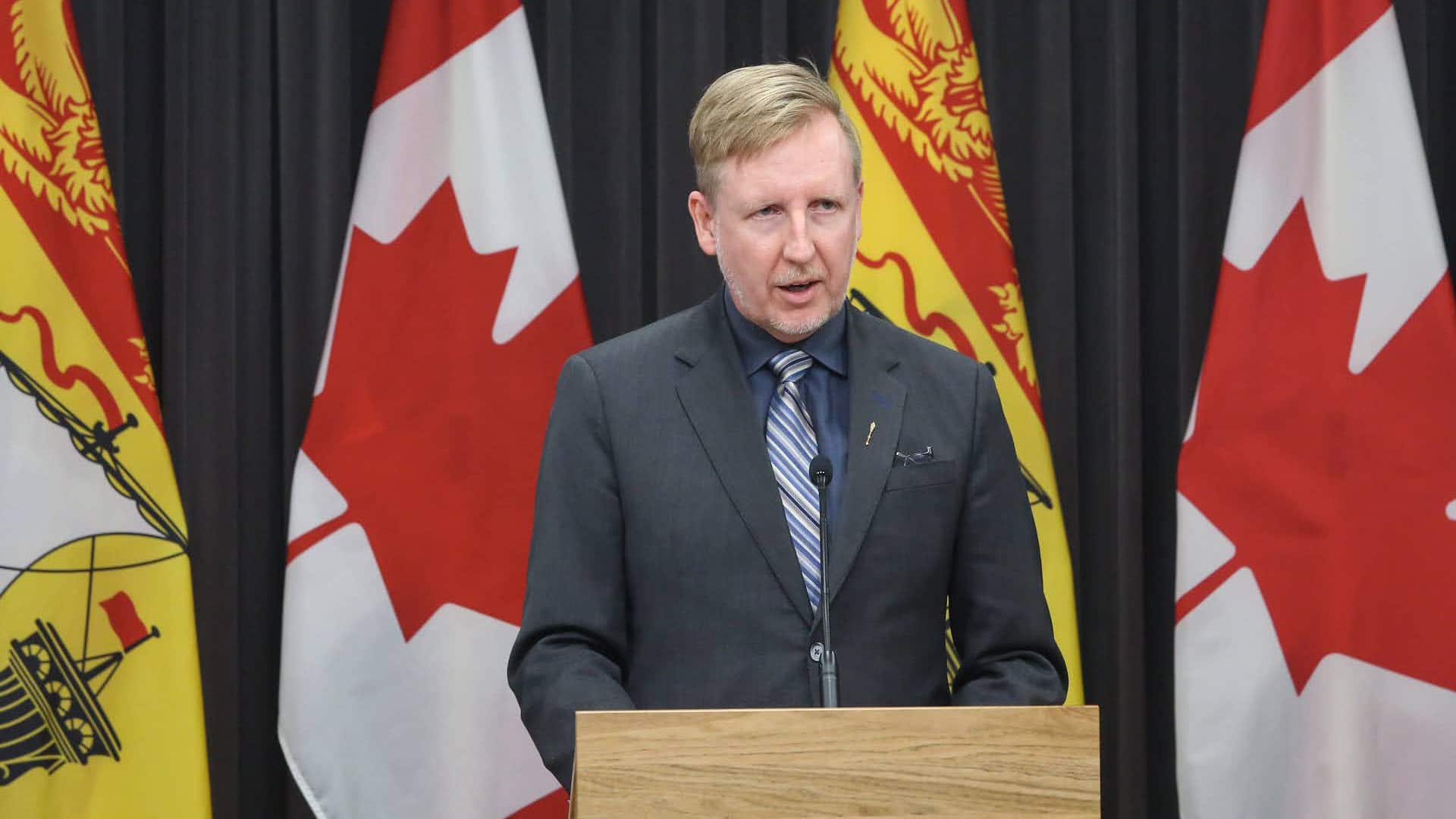 Student-to-student spread of COVID-19 has not been identified in N.B. schools

2 months agoVideo
1:51
Education Minister Dominic Cardy says students must continue going to school as there has been no evidence of student-to-student transmission in New Brunswick. 1:51

When someone tests positive for COVID-19, Public Health will contact those who have been within two metres of that person for 15 minutes or longer — or have had brief exposures that were repetitive in a span of 24 hours that added up to 15 minutes or more.

Public Health also decides when that person was contagious and the contact tracing is based on that period of time.

Russell said there's no need to issue a public advisory if close contacts are notified and there's no risk of public exposure.

But if they can't track down or reach all the close contacts, that's when Public Health officials will notify citizens about potential exposure out of "an abundance of caution."

Dr. Jennifer Russell, New Brunswick's chief medical officer of health and Health Minister Dorothy Shephard, will be speaking at a news briefing in Fredericton at 2:30 p.m.

Businesses don't know what the rules are

The president and CEO of WorkSafeNB says the pandemic has been a difficult time for many New Brunswick businesses — especially when it comes to following the rules.

Doug Jones said the main concern he's hearing from business owners is they aren't sure what rules are.

He said WorkSafeNB spent time this week clarifying those guidelines.

"Essentially, we want people to wear a mask almost all the time, unless you're in your own cubicle or in your own office space, in the work environment," he said.

"Just wear a mask all the time. That's the biggest message."

The biggest gap inspectors are also seeing is that many businesses don't have a written operational plan .

He said businesses typically get a warning first. But if problems continue or pose a serious risk a business could be fined or shut down.

That's when Public Health will ramp up testing capacity. They do this by adding more hours and testing centres, which they've done in Saint John.

There's also a priority system in place to minimize risks of outbreaks, which includes first-responders and people living in long-term care facilities. 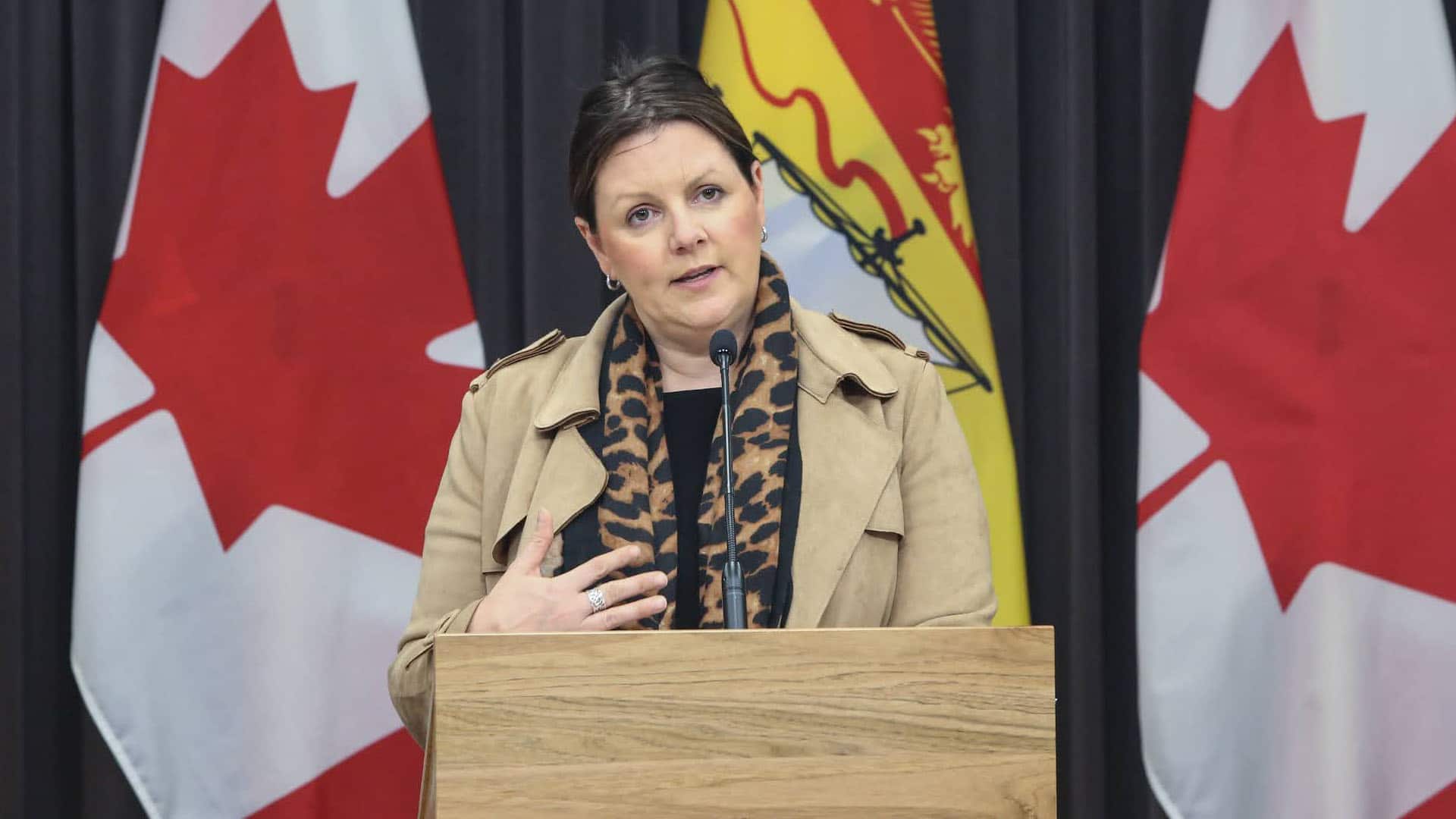 2 months agoVideo
1:15
Dr. Jennifer Russell says it's people under 30 who are contracting and spreading COVID-19 in New Brunswick, but they can also help stem the spread by wearing masks in public and avoiding large gatherings. 1:15

But there can be delays

"It is unfortunate but we keep track of that," she said.

According to its website, the decision was made after the announcement of new restrictions by Public Health officials in Prince Edward Island and Nova Scotia.

The positive test was within the Saint John Sea Dogs organization.

All fitness and recreational facilities, libraries, museums and casinos in the region must close for the next two weeks, as well.

P.E.I. Chief Public Health Officer Dr. Heather Morrison is advising people to travel off the Island only for essential purposes.

Nova Scotia reported 37 new cases of COVID-19 on Tuesday — the fifth highest single-day increase in cases since the start of the pandemic.

As of 12:01 a.m. Thursday, all restaurants and bars in the Halifax region must close to in-person dining, except for takeout and delivery orders, for the next two weeks.

If New Brunswickers are travelling from there, they should behave as though they've just come from an orange zone.

She is advising people to avoid gatherings and vulnerable people. They should also wear a mask inside and out.

"This is a rapidly changing situation and we're assessing it every day," Russell said.

And if risks are getting too high, New Brunswick will be cut off from Nova Scotia.

New Brunswick Public Health has warned of the following possible exposures to COVID-19 in Moncton and Saint John, including gyms, stores, bars, restaurants and on flights.

Anyone who visited these places during the identified times should self-monitor for symptoms for 14 days.

Anyone who develops any COVID-19 symptoms should self-isolate and take the self-assessment online to schedule a test.

Public Health has identified a positive case in a traveller who may have been infectious on Nov. 19 while on these flights:

With files from Hadeel Ibrahim