There are now 45 cases of COVID-19 in New Brunswick, with 12 new confirmed cases, all travel-related, except one that could be the the province's first case of community transmission, chief medical officer Dr. Jennifer Russell announced on Friday.

There are now 45 cases of COVID-19 in New Brunswick, with 12 new confirmed cases, all travel-related, except one that could be the province's first case of community transmission, chief medical officer Dr. Jennifer Russell announced Friday.

With this case, a link could not be determined.

As a result, testing is being expanded to include any health-care workers with symptoms who have not travelled, she said.

Any health-care workers who have developed symptoms, such as fever, cough or shortness of breath since March 20, are ordered to immediately self-isolate and call Tele-Care 811. 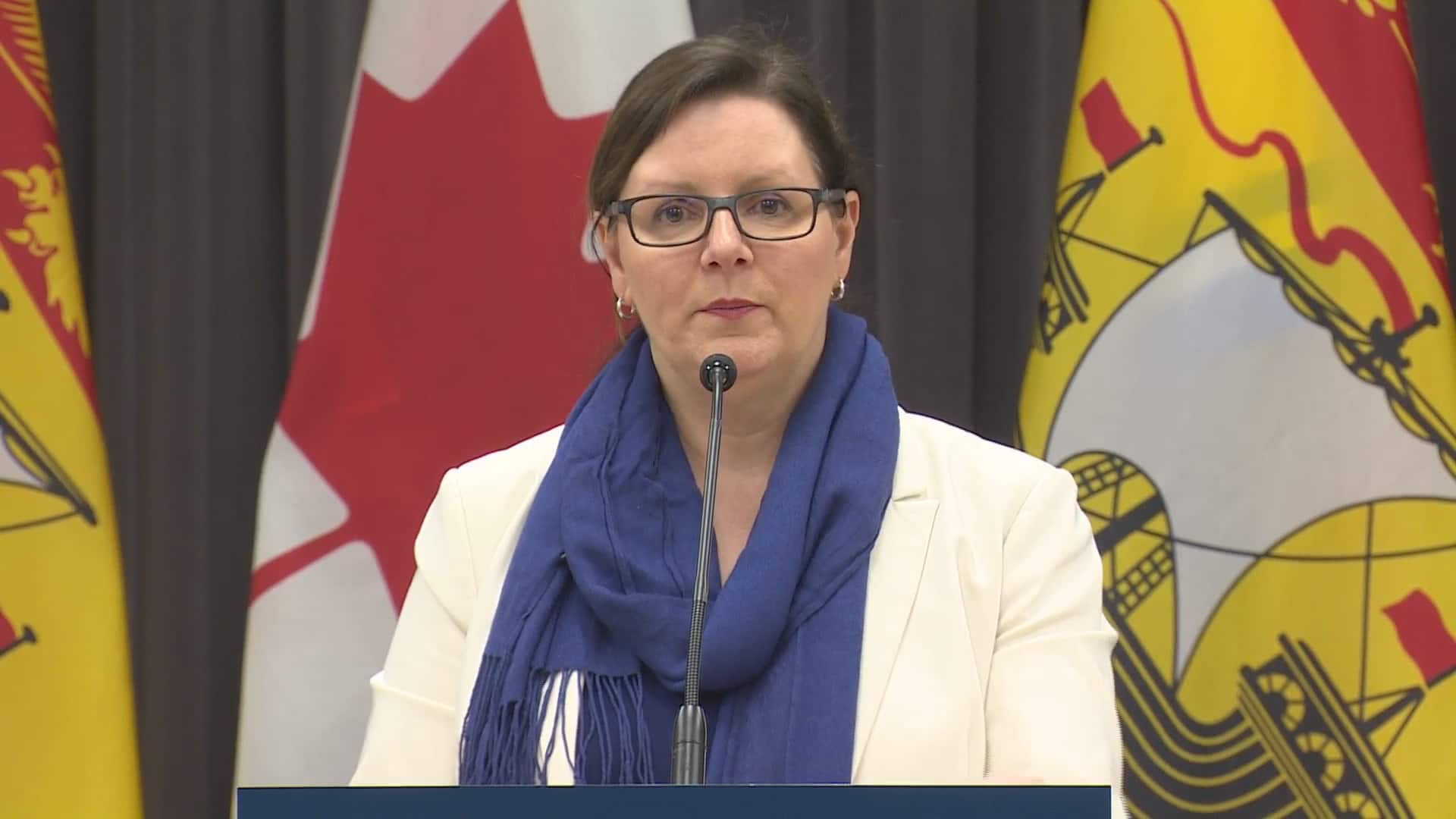 Meanwhile, one of the previously confirmed cases of the viral infection has recovered, Russell told reporters during the daily update in Fredericton.

"So that's a good news story."

Public Health has identified a confirmed case of COVID-19 on two different flights that landed at New Brunswick airports.

Any passengers on those flights should be self-isolating for 14 days anyway, as anyone returning from international or interprovincial travel is required to do, but Russell said it's "vital" they do so.

The 12 new confirmed cases include:

Citing privacy, Russell declined to reveal any information about where the suspected case of community transmission is located, or how it was determined the individual should be tested.

Data from the Public Health Agency of Canada this week show almost half the COVID-19 cases in the country are a result of community transmission from an unknown source, while 42 per cent are tied to travel and seven per cent are linked to close contact with a traveller who tested positive.

Experts say that signals there could be a silent epidemic happening across the country. 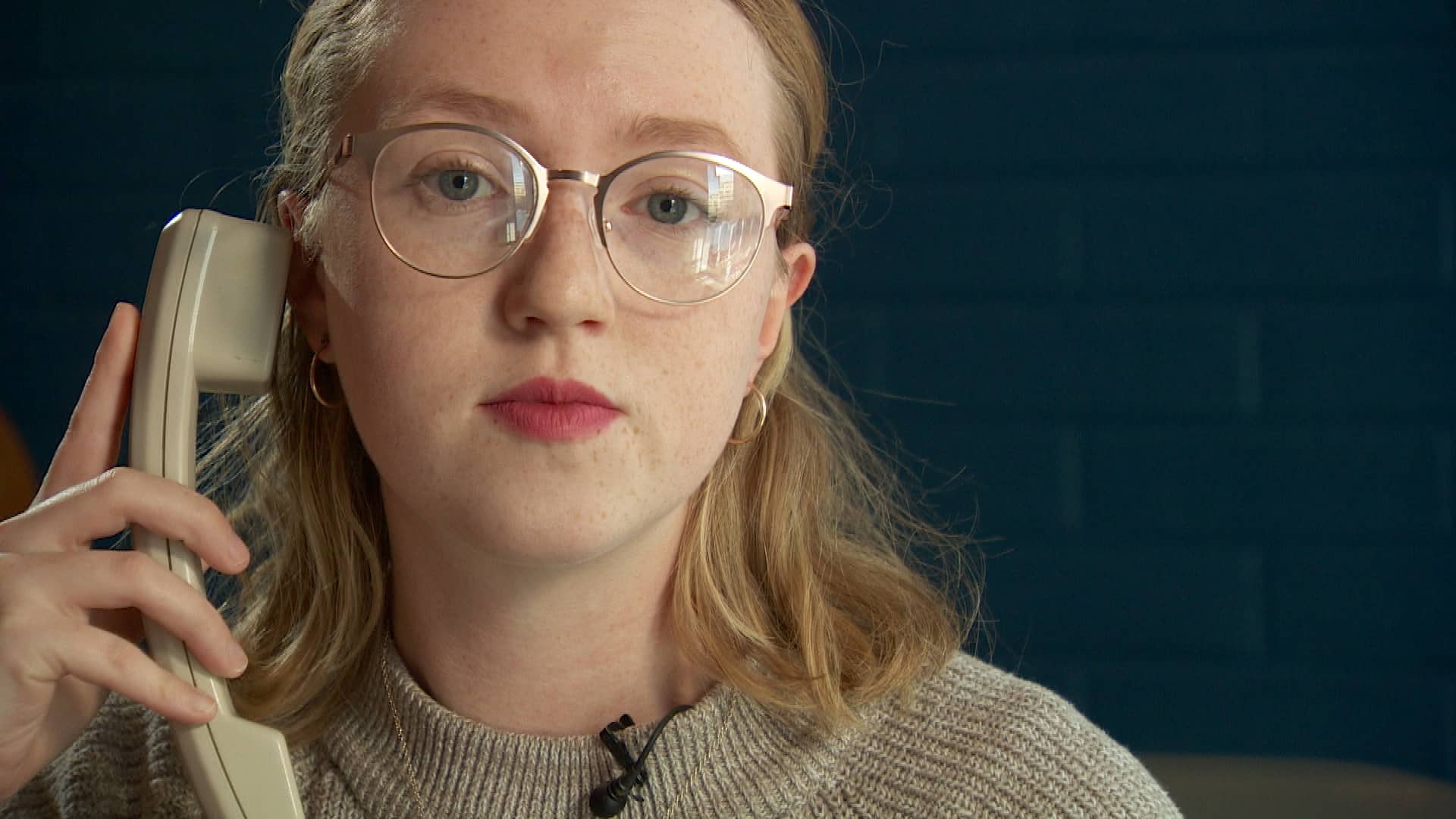 Questions? Symptoms? Here’s who to call during the COVID-19 pandemic

The New Brunswick government no longer reports the number of tests that have come back negative — one of the cuts in the information being provided to the public.

Earlier this week, the government stopped letting the public know whether the cases were male or female. It has never revealed the municipalities the cases are in and has provided little detail about the travel of those infected.

On Thursday, the government said there were more than 1,700 tests that came back negative.

Premier Blaine Higgs said the government will ensure the province has enough equipment to deal with the pandemic.

Work is underway to retool plants to manufacture ventilators, and several companies have already begun producing hand sanitizers, he said.

The previously announced one-time income benefit of $900 for workers or self-employed people who have lost their jobs  because of the state of emergency will begin on April 2.

The Red Cross will have a website with more information about the program online by noon Monday, he said. 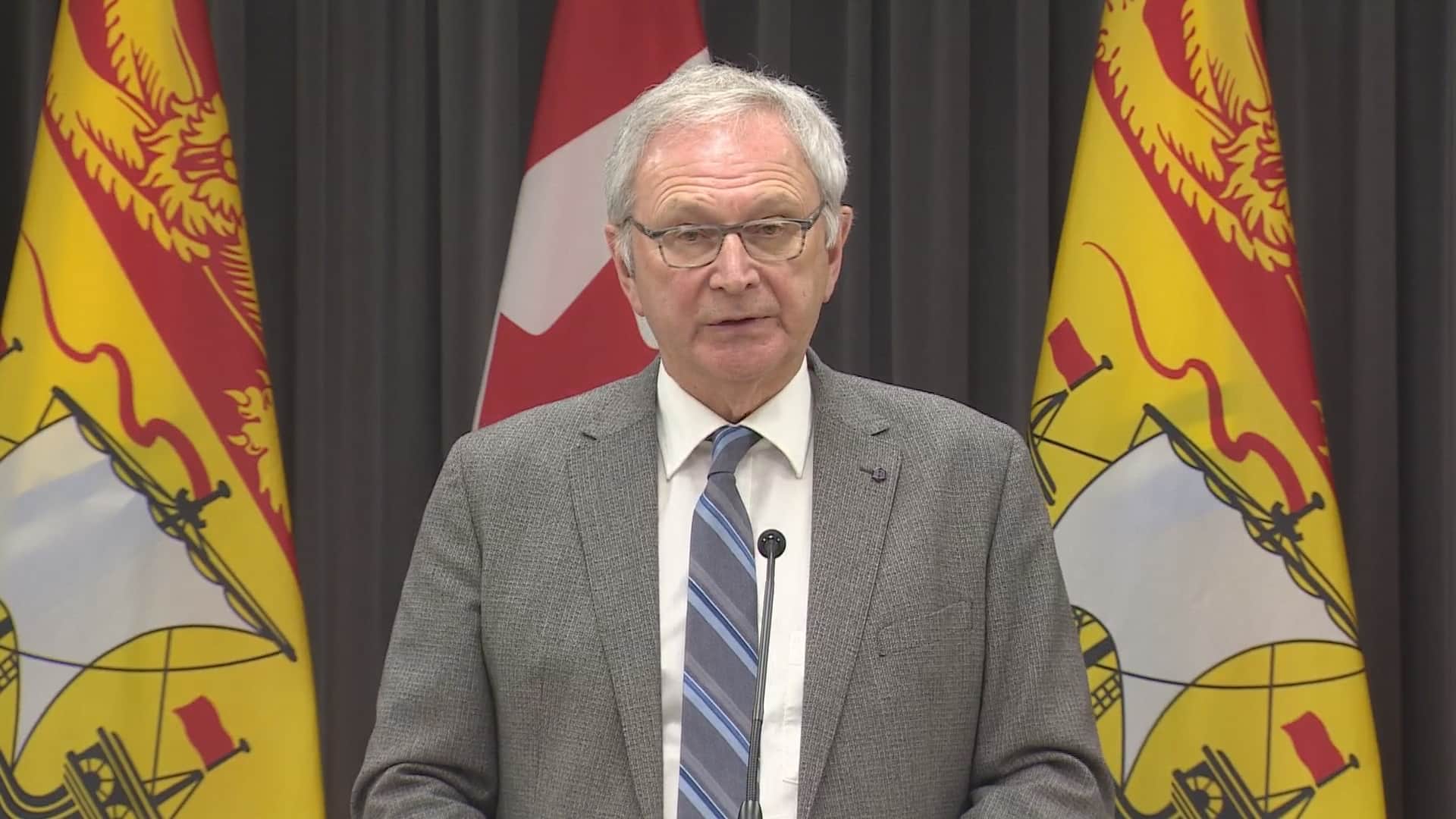 10 months agoVideo
1:24
Premier Blaine Higgs said a new Red Cross website will be up and running on Monday at noon and it will allow people to apply for their $900 benefit. 1:24

"We are already starting to discuss our country's eventual recovery from this pandemic," said Higgs.

The co-operation between the federal government and the provinces has "never been greater," he said.

"Eventually, this situation will end, and as a nation, we will need to make the right decisions to grow our economy, repair the damage that has been done, and put us on a trajectory that will bring prosperity to Canada, including to the resilient people of New Brunswick."

As the COVID-19 outbreak continues, charities across New Brunswick are wondering how they're going to raise money since they're not able to host fundraising events.

David Hickey, spokesperson for the Heart and Stroke Foundation, said his organization had to cancel and postpone four major events, which accounts for 40 per cent of its revenue.

"It's top of mind for us," he said. "Our need in the community isn't going away."

One of the major events was the Hockey Heroes Weekend, where participants get to skate on the ice with NHL and Olympic hockey players. This event, which was scheduled for May, typically brings in more than $1 million for the New Brunswick organization. It has been rescheduled for the fall. 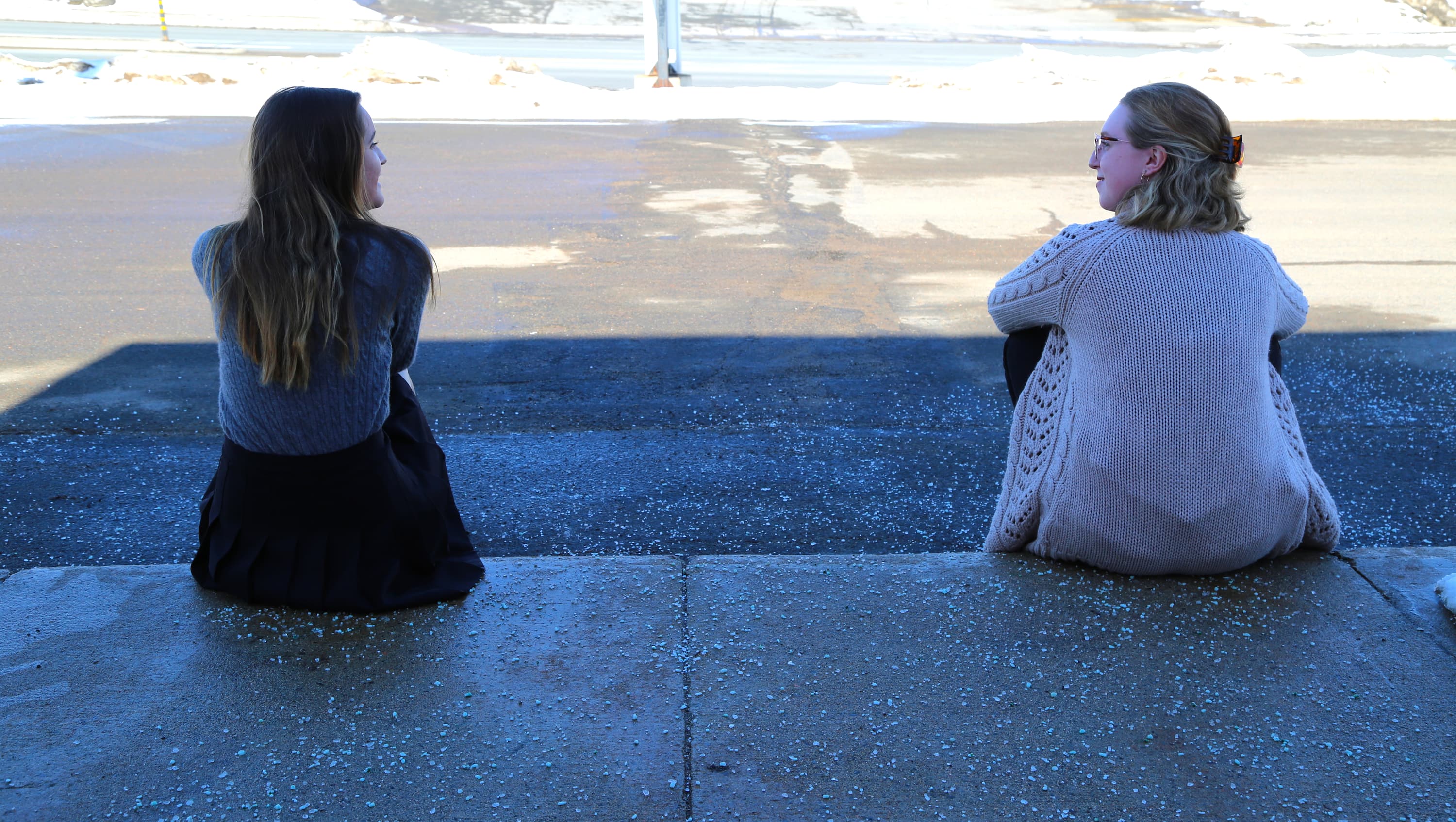 How keeping two metres away from others could save your life

10 months agoVideo
2:21
Why are we told to keep two arm lengths from others during the pandemic? Here's a detailed explanation, with facts from Dr. Alfredo Américo Miroli, immunologist from the National University of Tucumán in Argentina. 2:21

Hickey said all charities are "feeling the pinch," especially with the state of the economy and regular donors being laid off from work.

"It's extremely uncertain times," he said.

A number of third party fundraisers were supposed to take place in coming months, which have since been cancelled because they consist of larger gatherings.

"We're really having to take a look at our budget and what our priorities are," Baldwin said.

Imagine Canada is projecting that three months of mandated social distancing and the economic downturn associated with COVID-19 will cause charities to lose $9.5 billion and layoff more than 117,000 employees.

Imagine Canada is in discussions with the federal government to create an emergency and stabilization fund, including cash grants to charities and nonprofits and interest free loans.

Those who haven't been impacted by layoffs will still have to pay property taxes by the deadline, Higgs said..

He said the government's revenue has dropped "dramatically" and it needs some money in that stream to backstop gaps in the federal government relief package.

"We want to see everyone get through this time period," Higgs said.

Higgs also applauded New Brunswick's all-party COVID-19 committee, which has been working together since it was formed three weeks ago.

He has also been speaking with premiers across the country on a weekly basis.

Staff in Anglophone West School District, said the district and officials with the Department of Education, will continue to work on plans for a continuation of learning despite the closure of schools, superintendent David McTimoney says.

"Students and parents should not expect specific instruction from their teachers until early April," he said in an email.

"A plan for continued learning will be communicated with everyone when it is ready.  The current focus is on safety, health, well-being and families."

There will be no April report cards across the province and all school playgrounds are now closed to the public and signs will be posted as soon as possible.

In a news release, the province reminded employers to comply with the measures in the state of emergency declaration.

Businesses that are allowed to be open must limit the number of customers to maintain physical distancing rules and must check that customers entering are not among those required to be in self-isolation.

If business owners fail to comply, it could result in enforcement by the Department of Public Safety or a stop-work order by WorkSafeNB.

Costs of guns, ammunition could go up

Ross Faulkner, owner of the Gun Dealer in McAdam, had to close last week.

Although, he's worried about the future of his business, Faulkner is also concerned over panic buyers in the United-States purchasing guns and ammunition.

In the U.S., gun shops are seeing long lines around buildings as people rush to stock up. There, store owners are not hesitant to say fear over the spread of the novel coronavirus is driving sales.

Although he has a lot of product left that he can sell online, panic buying in the States could also mean a shortage of ammunition and firearms going forward across Canada.

It could also mean an increase in costs.

"We feel panic buying south of the border is resulting in shortages in Canada," Faulkner said.

Faulkner, who has been in the business for 44 years, had to lay off one employee and he's worried he might have to lay off more.

"For us the story is the hardship … we still have expenses," he said.

Nicolas Johnson, owner of TheGunBlog.ca in Toronto, said there is a cocktail of factors driving demand for guns and ammunition in the United-State and Canada.

Because of regular supply and demand, stores are selling cheaper products today than what they will be selling in the future.

Johnson said people are concerned about food shortages, so they're purchasing more ammunition in case they need to hunt for food to feed their families.

People are also buying these products as a means of protection.

"When you see uncertainty, provide for your family or protect your family," Johnson said.

Virus not at its peak yet

While reminding residents to keep their physical distance from one another, Higgs said the province has not yet reached the peak of COVID-19.

Higgs said it's too early to tell whether the measures his government has put in place, such as declaring a state of emergency, will be successful in offsetting the effects of COVID-19.

"Over the next several weeks, I guess, we'll see whether it's working or not."

Higgs said his government will continue to urge New Brunswickers to take the necessary health precautions.