Four new cases of COVID-19 have been confirmed in New Brunswick, an outbreak has been declared in Balmoral, and people who travel outside the Atlantic bubble for work will be subject to new isolation rules, the chief medical officer of health announced on Thursday.

Four new cases of COVID-19 have been confirmed in New Brunswick, an outbreak has been declared at a special care home in Balmoral, and people who travel outside the Atlantic bubble for work will be subject to new isolation rules, the chief medical officer of health announced on Thursday.

All of the cases are self-isolating and under investigation, she said.

An outbreak has been declared at Résidence 4 Saisons, after one person tested positive at the 30-unit facility, about 68 kilometres south of Campbellton.

All of the residents and staff are being tested today with rapid testing, said Russell.

"We should get those results back very shortly and then take next steps in terms of what has to be done to prevent the spread and contain it quickly."

"We're early on in our investigation and I don't think there's any more information that I can give you," she told reporters during a news conference in Fredericton.

Public Health has sent extra staff and resources to the facility and contact tracing is underway. New Brunswick's chief medical officer of health said she expects to see local outbreaks continue to occur all around the province in the months ahead.

Because the vast majority of the province's cases originate outside the Atlantic bubble, and risks in other provinces continue to rise, New Brunswick is "doubling down on decreasing those risks," Dr. Jennifer Russell said, referring to the new border measures that take effect at midnight for New Brunswickers returning to the province after work-related travel.

"We really don't have a choice but to act now," Russell said.

"There is a rising tide of COVID-19 all around us. If we fail to act, the tide can eventually overwhelm us."

The number of people diagnosed with COVID-19 on a daily basis in Canada has jumped to about 2,700, compared to roughly 300 a day in July.

And about 12,000 people a day cross New Brunswick's borders for essential reasons, she said.

As a result, workers will now be directed to enter a "modified form of self-isolation" upon return to New Brunswick for up to 14 days, depending on the length of their stay, Russell said.

Modified self-isolation means they will be able to leave isolation to access essential goods and services, provided they wear a mask and practise physical distancing, she said.

According to the renewed state of emergency order, they will be able to access: necessities of life and supporting services, health care, goods and services required for work, banking and financial services, transportation, child care, animal care, and funeral or visitation services for members of their immediate family. 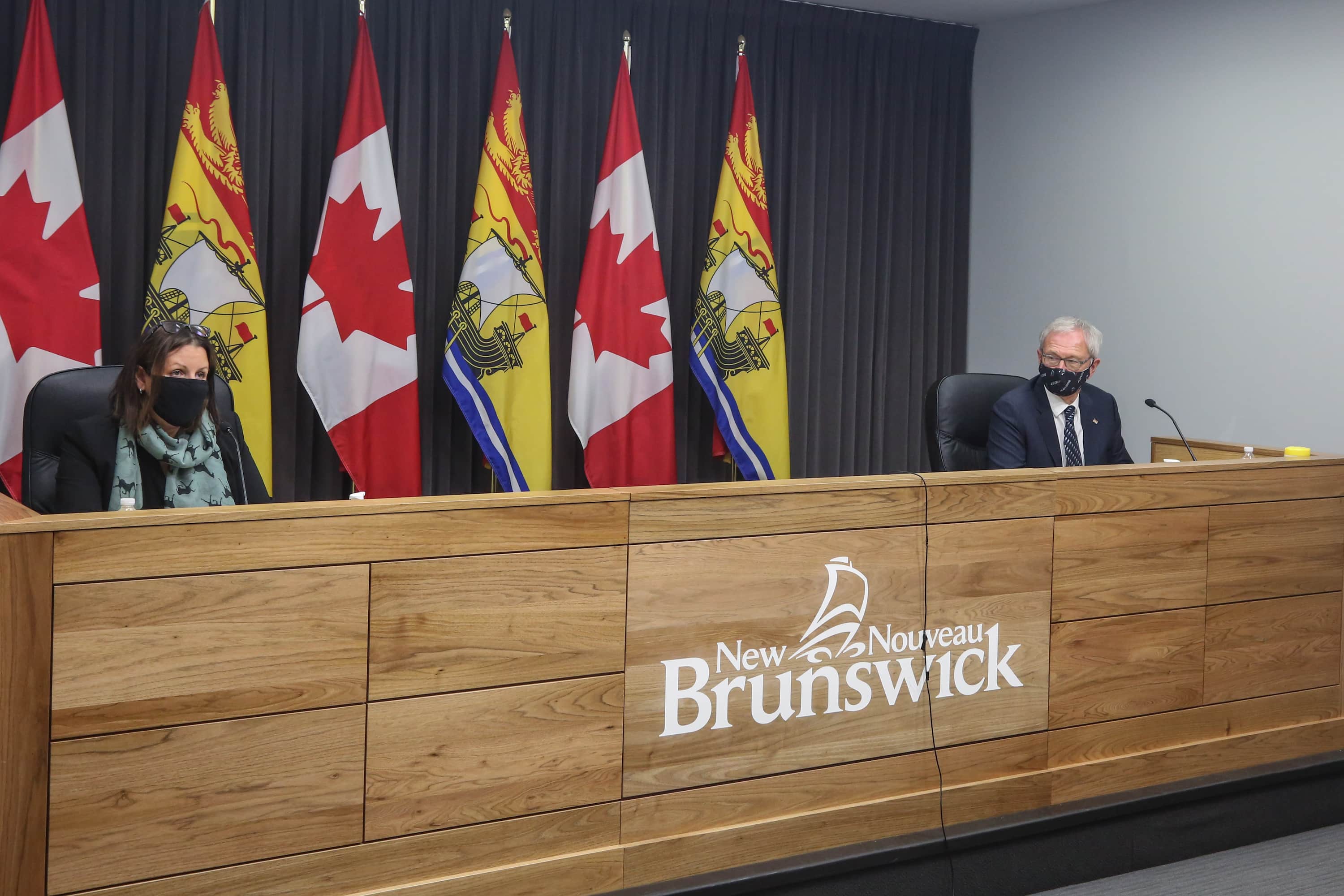 They will also have the option of returning to regular Public Health measures if they voluntarily get tested for COVID-19, have negative results and no symptoms, said Russell.

They can be tested up to three times, depending upon the length of their stay in the province.

A New Brunswicker who comes home and plans to stay for three weeks before leaving for work again, for example, would be required to undergo modified self-isolation unless they're voluntarily tested three times, around days zero to two, five to seven and 10 to 12, she said.

The modified self-isolation does not apply to truckers or daily commuters.

It does not apply to people travelling into the province under the authority of an operational plan approved by WorkSafeNB either, as this already involves a work-isolation requirement, Public Health said in a news release.

Anyone entering or returning to the province for non-essential travel, such as following a vacation, visiting family or moving to New Brunswick, is still required to self-isolate for 14 days, it said.

Travel into Restigouche County by residents of Listuguj First Nation and of Pointe-à-la-Croix, Que., to access essential goods and services up to twice a week, is now restricted to between the hours of 6 a.m. and 10 p.m., Premier Blaine Higgs announced Thursday.

This not apply to those who already have exemptions to enter the province to attend school, to access child care, or to obtain essential goods and services without isolating for 14 days, said Higgs.

Zone 5 'moving in the right direction'

The Campbellton health region, Zone 5, is "moving in the right direction," the province's chief medical officer of health said Thursday.

Although new cases have continued to be confirmed since the region was returned to the more restrictive orange phase of recovery on Oct. 9, they haven't increased "in a dramatic way," said Dr. Jennifer Russell.

"So we are very happy in terms of the compliance and how things have improved. But again, we're not out of the woods yet. We do still have a lot of work to do."

Public Health officials plan to keep a close eye on the situation, but she said she's optimistic she will have "good news" for area residents "soon."

Mass COVID-19 testing will be offered Friday in Belledune for people in the Campbellton health region (Zone 5) who don't have any symptoms of the respiratory disease.

It comes after an employee at NB Power's Belledune Generating Station recently tested positive for COVID-19, according to Mayor Joe Noel.

Testing will be conducted at the Belledune Recreation and Cultural Centre between 9 a.m. and 5 p.m.

No appointment is necessary, but people should bring their medicare card with them and dress for the weather, as they will be lined-up outside on a first-come, first-served basis.

Since the clinic is for those without symptoms, people who get tested won't have to isolate as a precaution while awaiting their test results, the Vitalité Health Network has said.

Only residents of Zone 5, which is in orange level of COVID-19 recovery, should attend. The rest of the province is in the less restrictive yellow phase of recovery.

People with symptoms are asked to request a test online or call Tele-Care 811 to get an appointment at the nearest screening centre.

Four people are in the hospital but none in intensive care.

New Brunswick has reported 341 confirmed cases of COVID-19 since the pandemic began in March. There have been 294 recoveries and six deaths.

The province has conducted 101,030 tests to date. Fifteen new cases have been reported in the past week.