From TikTok to Instagram, COVID-19 messaging for young people is no easy task

Marketing experts agree: while trending platforms like TikTok and Instagram are the right place to reach a younger demographic — the message needs to be effective.

When Patrick Hickey scrolls through TikTok, he sometimes sees a COVID-19 ad in his feed from New Brunswick Public Health.

But the 22-year-old Saint John student normally scrolls past it, saying the static images with text are "very general" and don't catch his attention.

"It's quite repetitive information," he said of the government ads.

"Their effectiveness? I'm not really sure. I can't imagine they're getting that much engagement on them."

Premier Blaine Higgs admits the government's ability to reach Hickey's demographic is a "significant concern" and "a challenge."

"There is this kind of belief [that] we can still party on, and it doesn't affect me so I'm OK," he told reporters on Jan. 19, suggesting it's hard to get young people to accept the idea they should be concerned.

"That's a message we keep trying to put across, but it is and has been challenging."

'I wish this would go viral'

In Canada, about 35 per cent of the caseload is people under the age of 30.

For Higgs, it's a concern that can't be ignored.

"We've had cases where individuals have come home to isolate with their parents and one of their parents did not live because they got COVID."

While older age groups are more susceptible to serious complications from COVID-19, young people can also become gravely ill and suffer long-term damage to their health.

Chief Medical Officer of Health Dr. Jennifer Russell recognizes that social media could help — particularly when it comes to the COVID Alert app.

"I wish this would go viral," she said at a news conference on Jan. 8. "Somebody do a TikTok on this."

Robert Soroka, a marketing professor at Concordia University, gave the province points for trying but said the messages don't speak to young people.

He said the ads need to strike a balance between three key elements: the message, the platform and the source.

"They're very good at picking up on being patronized, on not being respected, so you really can't fool them," he said. "You have to have a source that is going to speak to them and mean something to them." 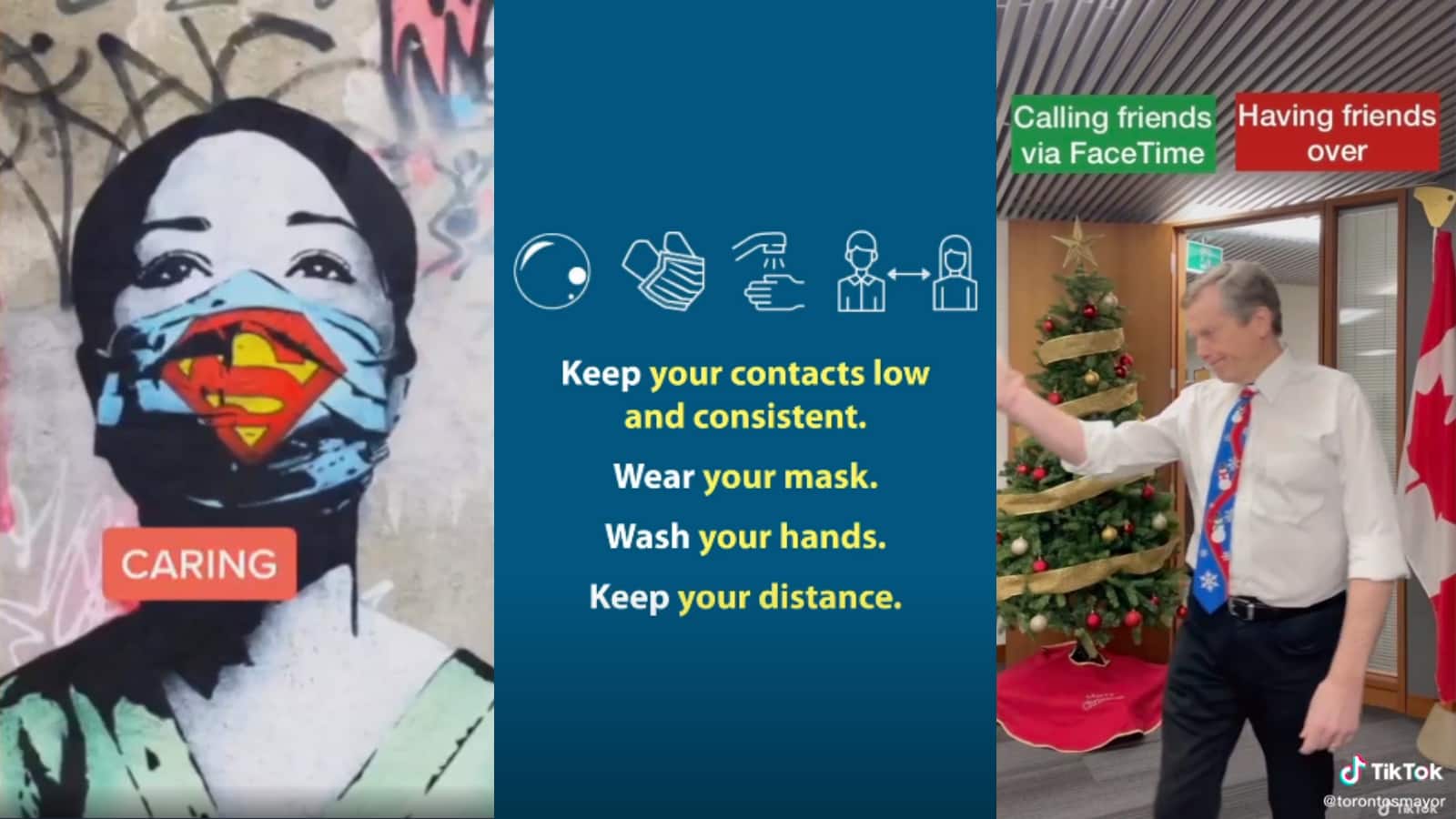 1 month ago
2:14
The province is targeting young people on social media, but some experts say it might not be effective. 2:14

The Quebec government rolled out a series of videos featuring survivors of COVID-19 with harrowing stories. Soroka said fear tactics aren't effective when it comes to reaching young people.

"These are not people that are worried about dying," he said.

Soroka said New Brunswick should consider using different spokespeople, such as a young doctor, to reach youth. Someone in the same age group with credibility could be relatable and effective, he said.

"You don't have to spend a million dollars on a Hollywood star or beg for some charitable effect, what you can do is reach out to someone a young person will respect."

Social media used around the world

Marketing experts agree: platforms like TikTok and Instagram are the right place to reach a younger demographic, but the message needs to be effective.

Doctors and politicians across Canada and around the world have tried creative social media campaigns to communicate the need to limit close contacts and wear a mask.

Toronto Mayor John Tory turned to TikTok to speak directly to young people in his city. His videos, with music in the background, demonstrate how to properly wear a mask and promote staying home.

Some of his videos have even gone viral, with more than half a million views.

Brett Caraway, director of the digital enterprise management program at the University of Toronto, has been studying social media campaigns throughout the pandemic.

He said New Brunswick's approach is similar to other governments across Canada, and needs to leverage the "social part" of social media to be more successful.

"What you have to do is sort of get people to shift what their expectations are for appropriate group behaviour, so you're kind of leveraging peer pressure."

Reginald Sheppard, a marketing expert and associate professor at the University of New Brunswick, said the province should see TikTok as an opportunity to interact with a younger demographic.

He said the platform could be used to create "active involvement" by having different people talk about COVID-19.

"There may be an opportunity for young people to talk to their peers," Sheppard said.

Hickey, 22, agrees that would be a better way to reach his peers.

"It's very general messaging that's going out," he said. "I think that it could be targeted better to the actual issues that young people are experiencing."

Alexandre Silberman is a reporter with CBC New Brunswick based in Fredericton. He can be reached at alexandre.silberman@cbc.ca