The province might not have had any confirmed cases of COVID-19 for nine straight days, but that doesn't mean New Brunswickers can run rampant.

The province might not have had any confirmed cases of COVID-19 for nine straight days, but that doesn't mean New Brunswickers can run rampant.

"I'm glad we're able to lessen the restrictions but I want to remind everyone that this is not a ​​​​free–for–all," said Premier Blaine Higgs during Monday's news conference in Fredericton.

At the afternoon news conference, they pleaded with New Brunswickers to continue following public health's advice to eliminate the spread of COVID-19.

"Let me be clear. We are nowhere near ready to declare victory over the COVID-19 virus," Russell said.

The province's special telephone line received 758 complaints from people about other residents not following the rules. That number was up from 617 the weekend prior.

Meanwhile, officers are also following up any reports of potential violation on the rules.

Law enforcement issued 22 tickets over the last week out of a total of 77 tickets that have been issued overall since the state of emergency was declared last month.

"Ticketing people is a last resort," Higgs said. "But we will continue to issue them as long as people break the rules. If we all continue to follow the rules, we will be able to enjoy even fewer restrictions in the weeks and months to come."

112 people have recovered from COVID-19

To date, 112 people have recovered from the virus with three people remaining in hospital, none of whom are in an intensive care unit.

Of the 118 confirmed cases of COVID-19 in New Brunswick, 66 are travel-related.

Meanwhile, 42 are close contacts of confirmed cases and 10 are the result of community transmission.

Downtown Fredericton is going to be much quieter in September than it has been for three decades.

Organizers have called off the 30th anniversary of the Harvest Jazz & Blues Festival, following the province's decision to bar mass gatherings until the end of the year as part of its four-phase recovery plan from COVID-19.

"We were pretty much ready to roll out [the lineup]."

The event has been postponed until 2021, or whenever it's safe to bring back the festival, which takes place for a week every September in New Brunswick's capital.

He said agencies were understanding and not surprised.

"The music industry is upside down right now."

Staeban would not release the names of the 2020 performers he'd lined up but said he was "very proud" of the lineup.

"We had a lot of expectations coming out of last year's festival … it would have been very difficult to top Robert Plant and Lucinda Williams and Nathaniel Rateliff in one festival again," Staeban said plans for 2020.

"But the analogy I use is that the peaks may not have been as high, but the mountain range was bigger and had a lot more mountains."

Last year, the music festival saw up to 100,000 visitors from across North America.

In a post-COVID-19-restricted world, Staeban said, some components of Harvest and other festivals may need to be readjusted, such as the number of people allowed inside a music tent and whether food and alcohol can be served safely. 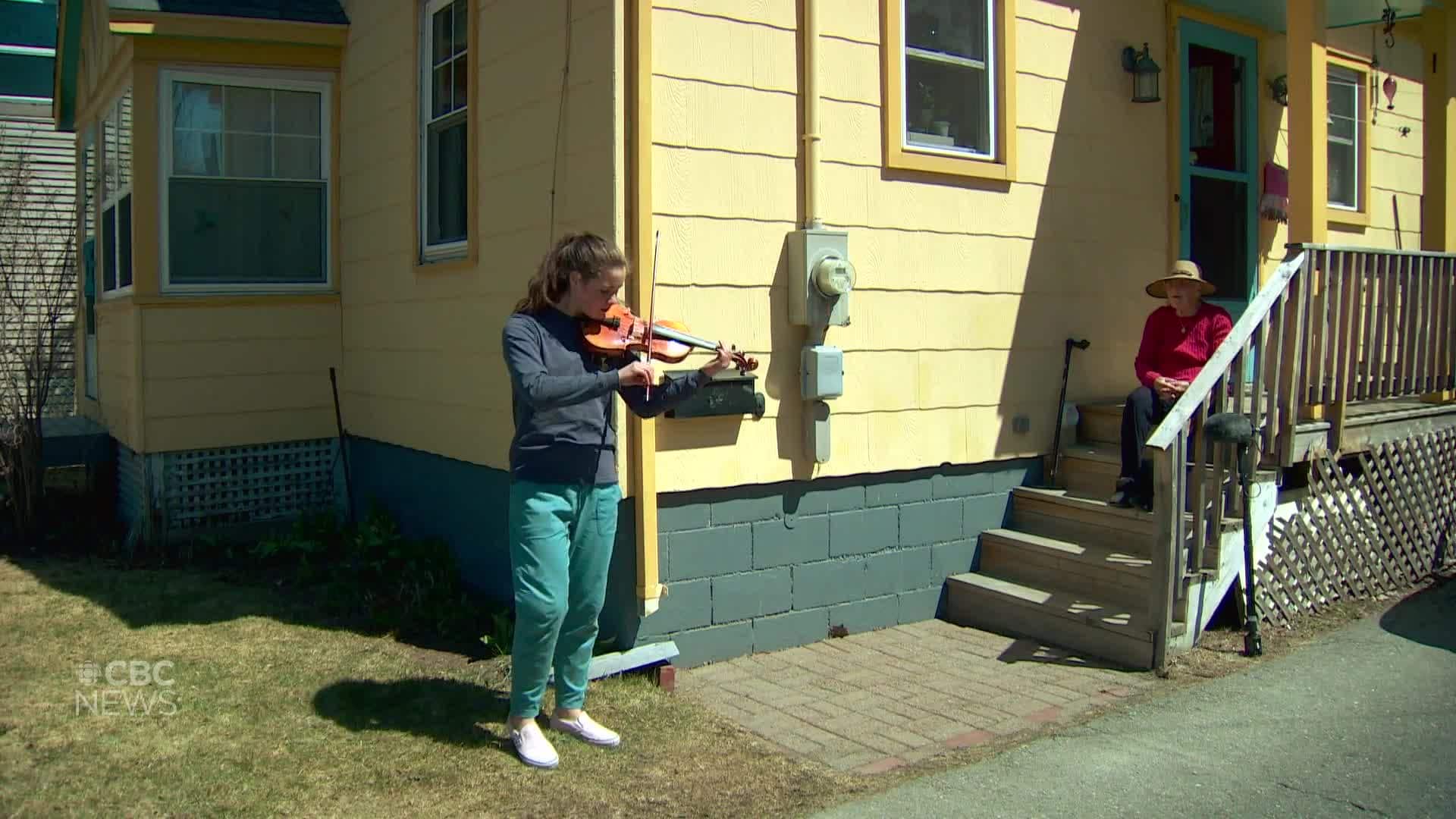 Fredericton teen plays violin for her great grandmother during pandemic

6 months ago
1:47
This Fredericton teenager has been playing violin from a distance for her great grandmother who is almost 102 years old. 1:47

"What Harvest has to do now is sit back and understand how the industry is changing and do everything we can to protect the legacy and history we've built for this community."

Those who have already bought ultimate passes will be able to get a refund, he said, although many subscribers have asked the festival simply to move their passes to 2021.

During Monday's news conference, Premier Blaine Higgs reiterated that beaches and parks are open to the public as long as people maintain a two metre distance from other households.

Playgrounds in provincial and municipal parks, as well as school grounds and any other public playgrounds are still closed.

"The risk of transmission within this setting is just too high," Higgs said. "It's a risk we should not take at this time."

The first snow crab landings of the season happened Sunday in the Acadian Peninsula. The snow crab season started a few weeks late because of the pandemic and will continue until July 1.

At the Caraquet wharf on Sunday, the A. J. Chiasson landed about 12,000 pounds of crab.

Jonathan Chiasson, the captain, said the crew could have brought in more but had an agreement with the processing plant where he delivers his cargo.

"The first few days, they didn't want to fill the factory to capacity at first. So they put quotas of 15,000 pounds per boat," he told Radio-Canada in French.

Factories are now required to observe additional protective measures to protect the health and safety of their workers, and avoid the spread of COVID-19.

Meanwhile, ships also have to adapt.

Crew members have to have their temperatures taken in the morning and evening.

"There is a protocol in place if there is a case [of COVID-19] that comes on board," said Chiasson.

At the wharf, the workers responsible for landings also have to wear masks.

"It's an adjustment, said Randy Chiasson, an employee of Pêcheries St-Paul, a Bas-Caraquet company.

"There is sweat … it is not easy to work and move a lot at the same time. We will adapt."

But while fishermen continue to adapt, there are other challenges on the horizon.

The return of the endangered North Atlantic right whales to the Gulf of St. Lawrence could force certain fishing areas to close.

Although this prospect could encourage fishermen to intensify their fishing to reach their quota sooner, Chiasson said factories can only process so much crab at a time with the measures that are currently in place.

Christmas might be eight months away, but Canada Post is seeing parcel deliveries similar to the holiday season.

That's because many Canadians are isolating at home and spending more time online shopping, Canada Post said in a news release.

On April 20, the Crown corporation delivered more than 1.8 million parcels to Canadians.

"That's similar to the biggest delivery days we see during the Christmas season."

Canada Post is advising customers to expect delays with their parcel deliveries. The combination of heavy parcel volumes and safety measures, means it takes longer to process.

To eliminate customer interactions at the door, Canada Post has implemented a "knock, drop and go" approach.

Delivery employees knock or ring, choose the safest location available to leave the item and then depart for the next address.

"This change eliminates the need for signatures at the door, speeds up delivery and has greatly reduced the number of parcels sent to our post offices for pickup," the news release said.

Canada Post has also delayed its 15-day hold period at the post office. Those parcels will not be returned to senders  until further notice.

Grade 12 students can get early start on post-secondary studies

The provincial government, in partnership with the University of New Brunswick, St. Thomas University, Mount Allison University and the Université de Moncton, is encouraging Grade 12 students to enrol in distance learning, which will be offered through the spring and summer intersession courses.

"If students have the opportunity to excel, that should be encouraged," said Education and Early Childhood Development Minister Dominic Cardy.

"That is why we are working with our partners to ensure interested Grade 12 students accepted into one of the province's publicly-funded universities can begin working towards completing their post-secondary programs."

With parental consent, students who are on track to graduate in June can enrol in intersession courses to accrue credits toward their degree starting this fall. This would be concurrent with their obligations to complete the public-school year.

The university courses will be available online with no physical attendance required and standard intersession fees will apply.

Once enrolled in these courses, students of the public education system would be obliged to abide by any policies or requirements of the university offering the course.

Some outdoor spaces, such as parks, beaches and golf courses opened on the weekend after the government said it was OK as part of the recovery plan announced Friday.

But a golf course in the Saint John area has decided to remain closed.

Alastair Barr has owned and operated the Welsford Golf Course for 25 years.

He had planned to open the course on May 18, and won't be changing that date now. He wasn't expecting government to allow him to open sooner.

"Getting to open is great, but at the same time it's not like we're going to be able to do business as usual," Barr said.

The government has announced several precautions golf courses must enforce if they want to reopen for the season.

Players must book a time online to play. No food and beverages can be served.

Courses also have to raise the cups on the green, so that a player doesn't have to put a hand in the hole to extract the golf ball.

Some golf courses, like Carmen Creek Golf Course in Fredericton, have already opened.

People concerned they might have COVID-19 can take a self-assessment on the government website. Symptoms of coronavirus include fever, a new or worsening cough, and breathlessness, as well as sore throat, headache and runny nose. People with two of those symptoms are asked to: