Extra resources are being added to the Tele–Care 811 line to reduce wait times as New Brunswick faces the "next big wave" of COVID-19 potentially entering the province with returning travellers, government officials announced Friday.

Extra resources are being added to the Tele–Care 811 line to reduce wait times as New Brunswick faces the "next big wave" of COVID-19 potentially entering the province, government officials announced Friday.

Premier Blaine Higgs was referring to residents returning from travel outside Canada, stressing the importance of them following the self-isolation rules as soon as they get off their planes.

New Brunswick declared a state of emergency Thursday in response to the outbreak, giving the government broad powers to enforce business closures and social distancing to prevent the spread of the virus.

No new cases of COVID-19 have been diagnosed, chief medical officer Dr. Jennifer Russell told reporters during the daily update in Fredericton Friday. There are still 11 cases: seven confirmed and four probable.

No one has been hospitalized.

The number of negative tests jumped Thursday from 410 to 509, according to the Public Health website.

But two days in a row without any new cases "doesn't mean a whole lot" due to the incubation period of the virus, said Russell.

She expects to see more cases in the coming days, she said, noting returning travellers may not be exhibiting any symptoms yet.

Asked whether the health-care system will become overloaded, Russell said officials "have to be prepared for that eventuality."

They are trying to delay it as long as possible through various measures, she said.

The government has created an online tool to help people assess their symptoms and ease the strain on Tele-Care 811.

The information line has been getting about 1,000 calls a day, up from about 200, she said.

Russell could not immediately say how many additional lines have been added, but did say there were some technical difficulties earlier this week. Retired nurses have been brought in to help, she said.

Information brochures about the requirement for returning travellers to self-isolate are being distributed to airports, Russell said.

A limited number of Service New Brunswick centres will reopen on Monday for essential services only, said Higgs.

The number of customers allowed in at one time will be restricted and customers will be expected to remain six feet apart, he said.

Cash payments will not be accepted.

The centres that will reopen on Monday are: 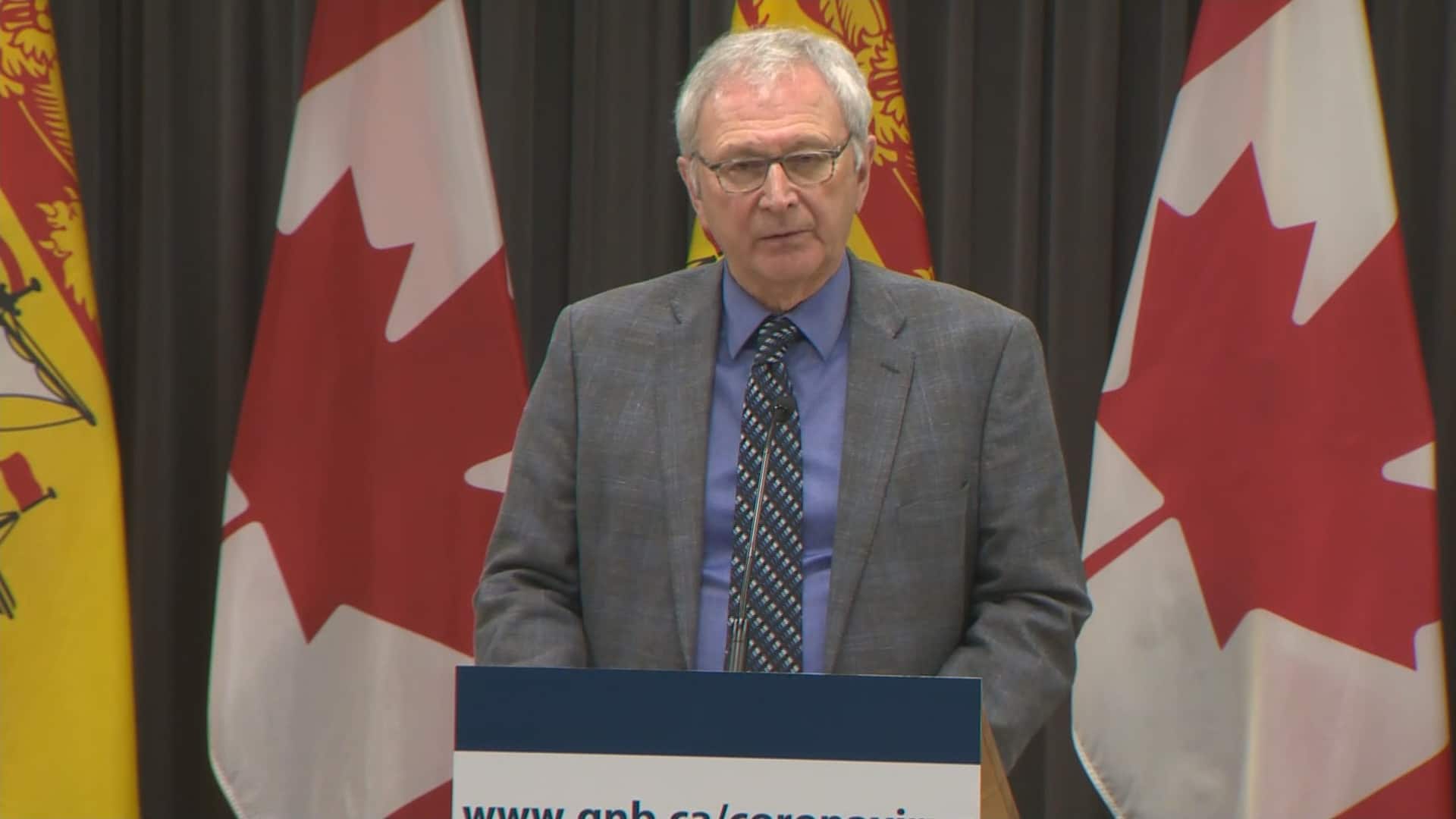 Two major grocery store chains are taking steps to protect their employees from the COVID-19 outbreak.

In a news release, Sobeys said it is starting to install plexiglass cashier shields in all of its stores.

Staff have been ordered to wash their hands every 15 minutes and cashiers will wipe down common areas more often.

Store hours have also been reduced from 8 a.m. to 8 p.m. The first hour of opening is dedicated to allow seniors to shop.

The reduced hours will allow Sobeys staff to have more time to sanitize stores and restock shelves.

Loblaw stores have also reduced their hours from 7 a.m. to 8 p.m. with the first hour dedicated to seniors and those with disabilities.

Loblaws will also begin to reduce the number of people in the stores at the busiest times.

Both grocery stores have stopped selling bulk baked goods and bulk items and tried to limit purchases of some items.

Restaurants like the Snooty Fox and Cora's in Fredericton are closed until further notice, as required by the emergency declaration. Chess Piece, a local café in Fredericton is still open to customers for takeout 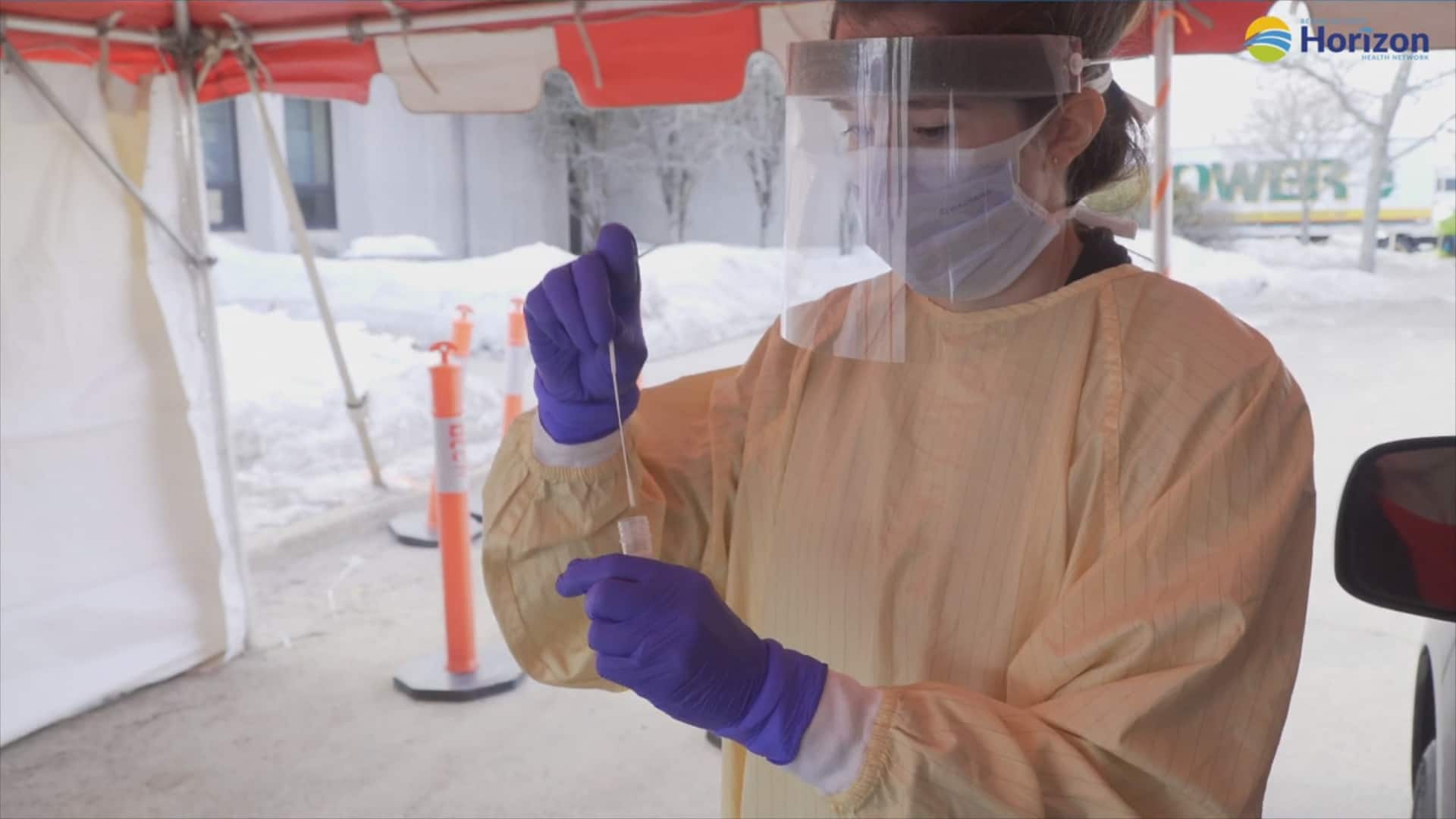 10 months agoVideo
0:53
Wondering what the NB COVID-19 testing centres are like? Horizon Health has created a virtual tour. 0:53

Why is NB Liquor still open?

Although many retail operations have been ordered to close, NB Liquor and Cannabis NB stores will stay open.

"The concern here is not allowing the black market to explode at a time when we certainly need to maintain control of activities in our province," Higgs said.

I don't know if my business should close

If businesses are not sure whether they should stay open, they are asked to call:

There is also a link on the Government of New Brunswick's Covid-19 website.

The province is working with the Atlantic Canada Opportunities Agency to come up with a comprehensive plan to ensure any issues businesses may face during this time are addressed.

Work Safe NB is also deferring premiums for businesses for three months. It will be visiting businesses to see if they're complying to the orders given by the province and to help make sure employees are performing their duties safely.

Business property taxes are required to be paid by May 31, but the province will review late penalties on a case by case basis to see if the penalty can be waived for financial challenges caused by closure.

Banks are also working with small businesses to help them manage unexpected challenges. Higgs said this will include a deferral of mortgage payments for up to six months. It could also mean providing some relief to other credit products.

A new link that offers a COVID-19 self-assessment tool has been added to the Department of Health's website.

The assessment tool has three parts with different coloured flags for the degree of symptoms:

Each category asks you to respond to a series of self-assessment questions and then act based on the answers. This will help New Brunswickers determine if they should call the 811 line. This will also help reduce the volume of calls.

Is the province testing enough people?

According to the government website, there have been at least 509 negative tests done so far.

At Friday's news conference, Russell said 13 clinics are opening up across the province to increase capacity to test New Brunswickers.

"I can see the number of tests will most likely increase based on the fact that the system is now responding at this stage."

What about my power bill?

According to NB Power's website, it will not be disconnecting customers for non-payment until further notice. The New Brunswick utility has also asked the Energy and Utilities Board to delay rendering a decision on its general rate application and for the request of implementing smart meters.

"We understand that New Brunswicker may have difficulty paying their bills due to illness, job loss, or requirements to self-isolate as a result of this pandemic," the website said.

Criminal trials in the provincial courts scheduled between March 23 and May 31 have been adjourned.

Unless someone has been ordered to appear or is in custody, Chief Judge of the New Brunswick Provincial Court Jolène Richard, said trials will be rescheduled to a later date.

People with trials scheduled must email or call the court where the trial was to be held to receive further directives.

Witnesses for trials between those dates must contact the public prosecution service as well for more information.

Richard said anyone who was scheduled to appear in provincial court for any other matter must call or email the provincial court office before that date to have a  telephone conference with the judge.

How are Campobello residents impacted?

Premier Blaine Higgs said, despite the U.S. border being closed, Campobello residents shouldn't have a problem getting to mainland New Brunswick.

"We've been told by the authorities that residents of Campobello will be allowed to move equally," said Higgs.

Higgs said ambulances would be able to transport residents across the border without a problem.

New Brunswick has decided to limit its explanation of where the cases are in the province to the medical zones they are in, without specifying the communities.

Russell said the situation is evolving, and she may consider being more specific.

"The message needs to be province-wide around staying at home and following these messages because we can't predict again which location we are going to see a case pop up," said Russell.

"We do have to be prepared for that in every corner of the province."'

Russell said that if there is a case of COVID-19 because of community transmission, the public would be told right away.

The Department of Education has announced it will cover child-care fees for anyone who has lost their income because of the COVID-19 outbreak.

In a letter to parents, Education Minister Dominic Cardy, said day-care centres who have laid off their employees cannot charge parents. But if a centre has not laid off their staff, parents will have to pay to ensure a place is reserved for their child.

He also said that parents who are essential service workers won't have to pay double fees for childcare services, "even if you are paying to reserve a space at your usual childcare facility but have your child attending one of the emergency child-care facilities."

COVID-19 test samples are sent to the Georges-.L.-Dumont Hospital lab for confirmation of the results.

At the same time, the lab would package part of the sample and send it to the National Microbiology Laboratory in Winnipeg, Canada's only Level-4 virology facility. The Winnipeg lab is equipped to work with the most serious and deadly human and animal diseases, such as Ebola.

It's also one of only a handful in North America capable of handling dangerous pathogens.

The Moncton hospital has been processing around 100 tests over the last week, according to Dr. Richard Garceau, a microbiologist and an infectious diseases specialist at the hospital.

The hospital hasn't run into any backlogs yet, but Dr. Garceau expects the number of testing requests to climb.

"We've seen a major increase in testing since the past seven days," Dr. Garceau said.

What if I have been laid off?

Earlier this week, the federal government announced it would provide an $82-million aid package to help workers and businesses to cope with COVID-19.

The announcement also included two new national benefits that those who aren't eligible for regular employment insurance can apply for beginning April.

The Emergency Care Benefit is for people who are self-employed or gig workers. It pays up to 15 weeks of benefits at a maximum of $450 per week, administered by the Canadian Revenue Agency.

The Emergency Support Benefit provides up to $5 billion in support for unemployed workers who aren't eligible for EI.

The emergency benefits will be made available in April for those who don't qualify for EI.