Public Health reported 21 new cases of COVID-19 in New Brunswick on Monday and a record-high number of active cases.

Public Health reported 21 new cases of COVID-19 in New Brunswick on Monday and the highest number of active cases altogether since the pandemic began.

There are 204 active cases, one person is in hospital and more than 1,700 New Brunswickers are in self-isolation, Dr. Jennifer Russell, the chief medical officer of health, said at a COVID-19 briefing being livestreamed Monday afternoon.

The 21 new cases announced Monday are as follows:

As of Monday, 7,732 vaccine doses have been administered in New Brunswick, with 1,862 fully vaccinated with the required two doses and 3,343 doses being held for a second dose. Both the Pfizer/BioNTech and Moderna vaccines require two doses.

"This is a very slow process because there is such a limited supply of vaccines right now," Dr. Jennifer Russell said at Monday's COVID-19 briefing.

Russell said that the availability and delivery of vaccines will ramp up in the coming months.

In the meantime, she said, the province is taking steps to improve the vaccine rollout plan.

They include the recent delivery of new ultra-cold freezer units, used to store vaccines, to hospitals in several zones and the updating of the province's online COVID-19 dashboard.

This section will be updated weekly.

As of Monday, there are about 85 health-care workers self-isolating, including Ambulance New Brunswick and Extramural staff, Dr. Jennifer Russell said at the COVID-19 briefing Monday.

Numbers provided by the Horizon Health Network show that about half of those, or 49 people, are Horizon health-care workers, including seven in the Miramichi area, 17 in the Fredericton area, 16 in the Moncton area and six in the Saint John area.

Russell said that these numbers are monitored on a daily basis, and that both Horizon and Vitalité have a "robust plan" to redeploy staff to areas of critical vacancies, if needed.

Education Minister Cardy has asked residents to cancel or not book March break travel this year and had choice words for those who choose to ignore that request.

At Public Health's COVID-19 briefing Monday afternoon, Cardy said he "really doesn't have time for people who think the rules don't apply to them," singling out people "who decide to take vacations" or take part in anti-mask protests.

Such behaviour is "deplorable and dangerous," Cardy said, noting that it's increasingly clear that travel is a key source of COVID-19 cases in the province.

"Anyone in New Brunswick who decides it's appropriate to go on a March break holiday is committing an act of selfishness," he said. "They're taking health-care resources away from people who need it and exposing themselves as people not worthy of the title of 'citizens.' "

Cardy further warned that there would be "consequences" for ignoring the rules, although he did not specify what those would be.

"No one wants to be talking about this," he said. "We need to pay attention to the rules so we can get on with normal life. ... Stay on board, follow the rules." 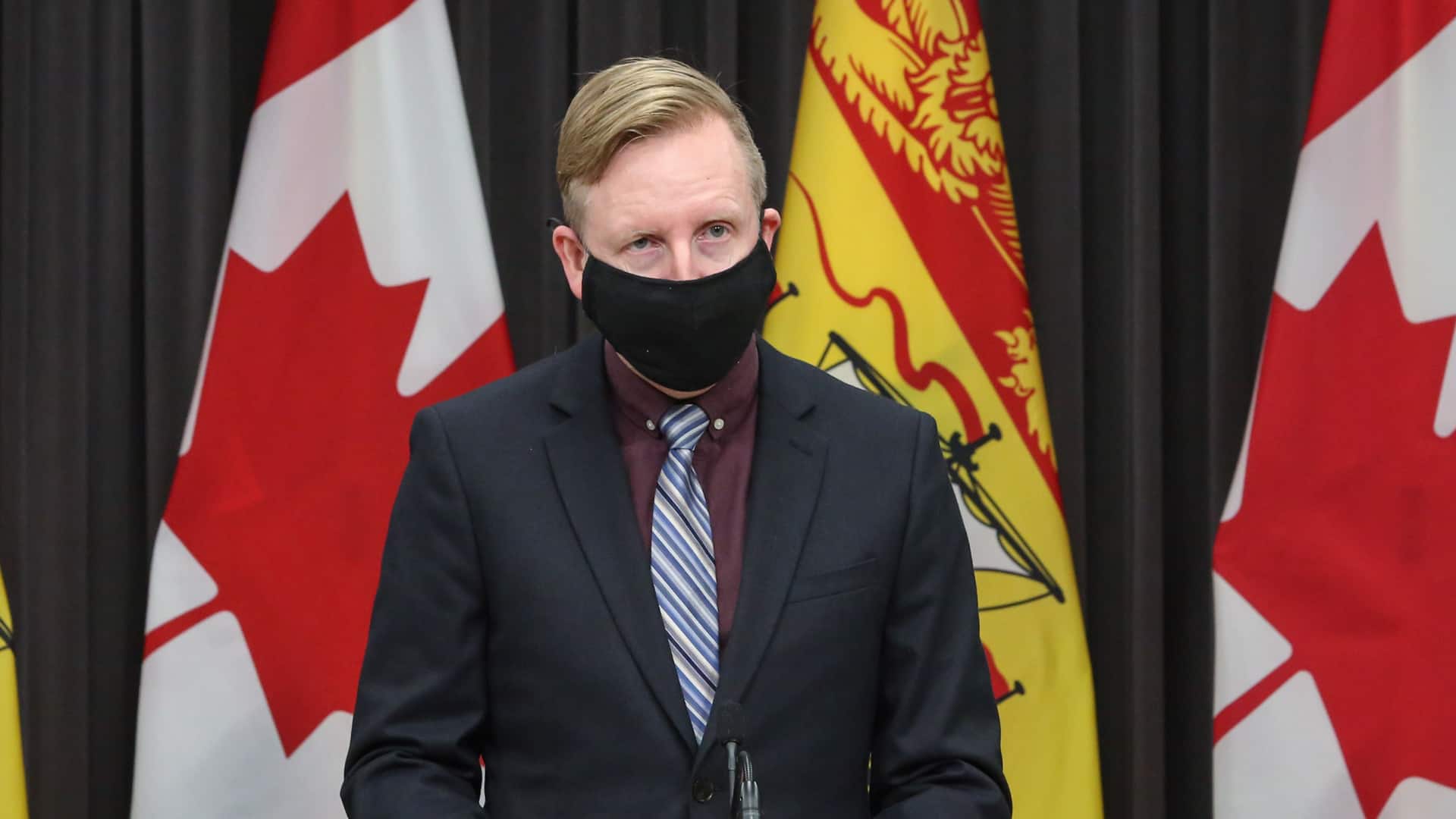 When the entire province was rolled back to the orange phase on Jan. 5, Premier Blaine Higgs urged New Brunswickers not to travel outside of their zone.

On Monday, Education Minister Dominic Cardy directly blasted the "tiny minority" of people who are refusing to listen to that advice and to the pleas of Public Health, urging them to "open your eyes, turn on the news."

He gave the specific example of "someone I'm close to," who told him on the weekend that her son had decided that "best response to the province going orange was to drive to Saint John from Fredericton for the express purpose of buying chicken."

When asked, "What are you doing, how could you be putting people at risk?" they responded, "LOL," Cardy said.

The province's own recovery plan website states that under the orange phase, "necessary travel only is recommended in and out of orange level zones" with the exception of travel for work, school, essential errands and medical appointments.

Asked late Monday if this person, or any person, would face repercussions for travelling outside of their zone for such a reason, spokespersons for the departments of education and public safety replied that they are looking into it.

Two schools confirmed news of a positive case on Monday, one in the Fredericton area and another in northern New Brunswick.

He noted that if a family is not contacted by Public Health, they should continue to send their child to school.

"To protect the privacy of students and school personnel, details, including names of those affected, will not be released," McTimoney said.

In Dalhousie, École Aux quatre vents said on its Facebook page that students will be learning virtually on Monday as preventive measure.

"We will inform you on the situation throughout the day," the high school said in French.

The case was confirmed Saturday.

As a result, more than 1,000 students in the Woodstock area were self-isolating over the weekend. That was lifted late Sunday evening, but students will be learning from home until at least Friday.

Contact tracing is also underway in the Campbellton region after two schools confirmed cases of COVID-19 on Saturday.

One case was confirmed at both Académie Notre-Dame in Dalhousie and Polyvalente Roland-Pépin in Campbellton, according to Public Health.

In the case of the Campbellton-area schools, only those contacted by Public Health will need to self-isolate.

The First Nation moved itself into the red phase on Friday after reports of two cases of the virus were confirmed.

"Everybody has done a good job following the rules and everybody knows how serious it is," said Chief Ross Perley.

"We're sticking together as a community."

Checkpoints have gone up on the perimeter of the First Nation to keep all non-essential visitors away. Community members are permitted to leave two times a day for essential items and medical appointments.

Perley said there is a lot of anxiety and fear in the community, but it was important to take action.

"We have a high percentage of elderly [people] in the community."

Further testing and contract tracing took place over the weekend.

"I'm hoping we'll get a clear picture of a timeline of how the province is going to roll out vaccinations for Indigenous people here in the province, considering we're a priority group," he said.

44 new cases announced over the weekend

The new cases reported Sunday include:

There are 59 active cases in the Fredericton region, 47 in the Moncton region, 37 in the Saint John region, 19 in the Edmundston region, 21 in the Campbellton region, and 1 in the Bathurst region.

The Miramichi region (Zone 7) is the only part of the province without a confirmed case of COVID-19.

After four cases were confirmed at Woodstock schools, Mayor Arthur Slipp said Dr. Jennifer Russell, the chief medical officer of health in New Brunswick, will be meeting municipal leaders in the area to discuss the prevention of further spread.

He is also encouraging residents to download the COVID-19 alert app to prevent further outbreaks.

Residents to be retested at Parkland Riverview

Residents at Parkland Riverview will be retested on Tuesday after a confirmed case was announced at the seniors home last week.

Lisa Snodgrass, director of clinical practice and infection prevention and control specialist with Shannex, said residents were tested last week and each test came back negative.

"We don't want to take any chances," she said.

If tests come back negative again, Snodgrass said the facility will discuss with Public Health to see if any restrictions can be lifted.

Right now, residents are remaining in their rooms and can only interact with family and friends virtually.

Staff are entering their rooms with personal protective equipment that has to be changed between visits with residents.

Snodgrass said the infected employee works in Canterbury Hall and is doing well.

Public Health identified a positive case in a traveller who may have been infectious while on the following flights:

If you were at any of these locations, and you have no symptoms of COVID-19, self-monitor and follow all Public Health guidelines. If you are experiencing mild to moderate symptoms of COVID-19 and do not need to talk to a nurse, complete the self-assessment and get tested.

With files from Elizabeth Fraser