The union representing striking workers at Covered Bridge Potato Chips near Hartland is promising to escalate attempts to get customers to boycott the popular chips during the contract dispute.

The union representing striking workers at Covered Bridge Potato Chips near Hartland is promising to escalate attempts to get customers to boycott the popular brand of chips during the contract dispute.

The 32 members of United Food and Commercial Workers Local 1288P have been in a legal strike position since June and some members walked off the job on Tuesday.

Carl Flanagan, a national UFCW representative, said in an interview that about 20 people are on the picket line on Wednesday in the chilly –20 C temperatures.

Flanagan said the company's owner is bringing in workers so he can continue to supply his potato chips.

The union official said the striking workers plan to drop leaflets at large stores, such as Superstore, Sobeys and Costco, to encourage more people to leave the chip bags on the shelves.

"We are not asking them to stop buying altogether, just help us get this employer back to the table so we can reach an agreement," he said.

"When he is using scab labour, he is still producing products so we are asking the product that is being produced by scab labour, please don't buy it."

Ryan Albright, the company's president, refused an interview on Wednesday to discuss the strike.

The company released a statement on Tuesday saying the company would emerge from "a small bump in the road."

He said the business will continue despite the strike.

The contract dispute is revolving around the issues of pay and seniority rights when it comes to scheduling, layoffs and call-backs. Most of the workers earn minimum wage.

The striking workers received support on the picket line on Tuesday from representatives of the New Brunswick Federation of Labour.

Flanagan said other unions will also help spread the word about the contract fight and the boycott.

The union official said he understands that some people may not support the work stoppage.

"The problem is people aren't educated, it is easy to sit back and say those buggers are trying to ruin that small business in Hartland, New Brunswick," he said. 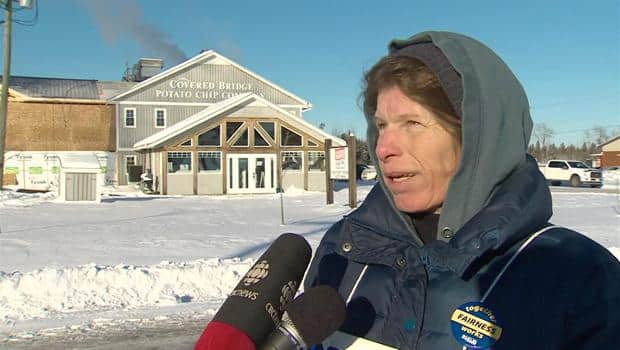