An historic covered bridge in Quispamsis was damaged on Wednesday morning when an overweight excavator involved in repairs crashed through the decking to the embankment below.

Overweight machine was carrying wood for repairs to Hammond River No. 2 bridge in Quispamsis, built in 1912 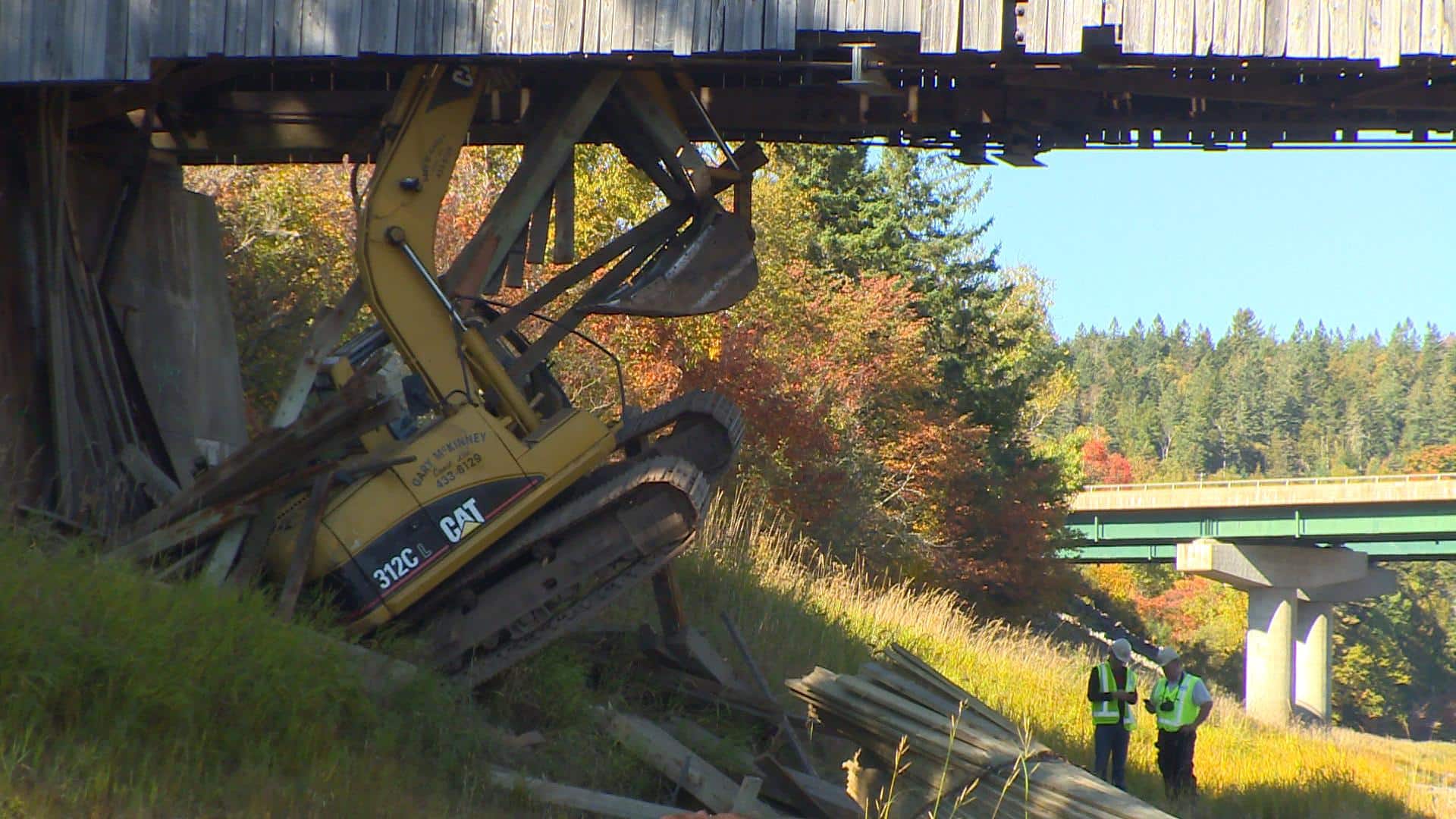 4 years agoVideo
0:40
The Department of Transportation and Infrastructure says it is working on a plan to safely remove the excavator that broke through the Hammond River No. 2 covered bridge on Wednesday morning. 0:40

An historic covered bridge in Quispamsis was damaged on Wednesday morning when an overweight excavator involved in repairs to the decking crashed through to the embankment below.

No one was injured, but the excavator is still snagged on a single support beam of the Hammond River No. 2 bridge.

WorkSafeNB is investigating and Department of Transportation and Infrastructure (DTI) officials are still working on a plan to safely remove the machine.

The bridge, which was built in 1912, has a weight limit of 12 tonnes, according to a posted sign. The 312C L excavator is listed as weighing more than 13 tonnes on the manufacturer's website. It was carrying a heavy load of wood at the time.

Operator Gary McKinney, a contractor hired by the DTI to conduct the repairs, told CBC News he did not want to comment.

He was taken to the hospital as a precaution, but confirmed he was not injured, just tired as a result of the incident.

The bridge remains blocked off and there is no word yet on how long the repairs might take.

DTI is still assessing the damage to the 104-year-old covered bridge, which is on Route 860 at the end of French Village Road, spokesman Shawn Berry said in an emailed statement.

The bridge was closed earlier in the week for scheduled work to replace the deck.

Stephen Gillis, a local angler, who lives in Quispamsis, said he went to the bridge to see how it was holding up after seeing images of the damage on Facebook.

"It doesn't look that great," he said.

Gillis said he's concerned about the future of the bridge considering the damage.

"I've been a fan of the old bridges for many, many years and this one in particular, I've fished under it," said Gillis, a member of the Hammond River Angling Association.

"We're losing the bridges in the province, we're probably at fewer than 60 now and every time one of them is damaged like this, you wonder if it's going to be repaired or torn down," he said.

"Hopefully there's nothing so severe they can't repair it."

With files from Matthew Bingley and Julia Wright