Community Forest International is taking the winning plans from its sustainable cabin competition and building an affordable, off the grid tiny home in the woods of South Branch. 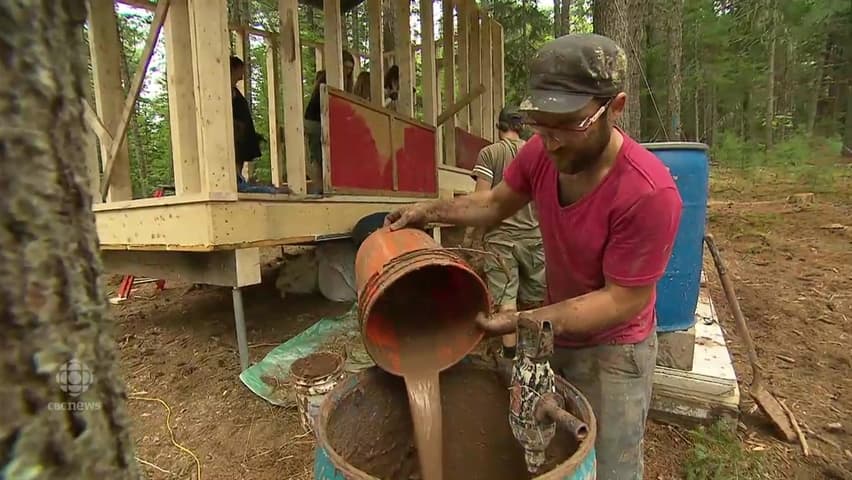 4 years agoVideo
0:59
Community Forest International is taking the winning plans from its sustainable cabin competition and building a small, affordable, off the grid tiny home, in the woods of South Branch. 0:59

Community Forest International is taking the winning plans from its sustainable cabin competition and building an affordable, off the grid tiny home in the woods of South Branch.

The group's backwoods cabin of the future competition asked for designs made from local materials with living space for two people and as little environmental impact as possible.

The contest had entries from 62 designers and architects from 24 countries.

Shamus Griffith is the group's green builder in residence and he's responsible for putting the plans into action.

"The design is a fairly simple one but then the elements involved are much more innovative and they also reach back multiple generations," he said of German architecture firm AW+'s winning design.

"For example, the insulation method we're using right now was found in a 700-year-old building in Germany and it's basically the same material that we're using now."

To make the insulation, straw is mixed with water, clay and lime. The mixture is then packed into moulds built along the walls.

"It will harden [pretty] well, a rock-hard surface, and then we'll use more clay as a plaster, on top of that."

Keeping with the theme of sustainable building, Griffith said the lumber comes from a local mill and the straw is bought from a farmer nearby.

Even the clay comes from an excavation site in the area.

Jeff Schnurr is the group's executive director. He wants this building to stand as an example of a different way.

"It's being built to show how sustainable buildings can be, as well as how we can measure and reduce the amount of carbon in a building."

Schnurr said 20 to 30 per cent of greenhouse gas emissions come from buildings, but he'd like that to see that change.

Part of that change is represented by Dakota Carruthers. The 24-year-old is a carpenter in-training doing a paid internship with the group.

"The reclaimed materials are really cool, to see old things have new functions, and the straw, I love the straw and clay so that was definitely a big draw."

Carruthers plans to build her own house, and wants to use the sustainable methods she's learning on the job site.

Schnurr said the cost of the cabin should be less than $10,000 and Griffith expects it to be livable by the new year.