A Tobique First Nation group has enlisted students in an innovative way to share Indigenous knowledge of traditional lands. They've created an app, which plots out the area and invites people to explore it electronically for detail and stories.

Wolastoqiyik students tell story of their community through new app

The Tobique First Nation reserve lies at the point where the Tobique River meets the St. John in eastern New Brunswick. Its Wolastoqiyik name is Negotkuk, which means "where one river flows beneath another."

And here, a Wolastoqiyik organization has enlisted students in an innovative way to share Indigenous knowledge of the area.

They've created an app, called CodersNorth Tobique, which plots out the area and invites people to explore it electronically for detail and stories.

Users will be able to expand a plot on this traditional knowledge map and see its historical and cultural significance to the community.

For instance, they might open up on a spot where people traditionally fished or picked berries. Other plots may reveal  sacred places for celebrations or ceremonies.

The information will be enriched by photos and videos of the various locations, and by interviews and teachings linked to it by local elders.

They've been learning about storytelling and how to tell an interesting story about something that's happening in their community.- Sky Perley ,  Wolastoq  Education Initiative

Throughout the summer, Wolastoqiyik high school students have been taking part in a program led by the Wolastoq Education Initiative, which is teaching them how to write code using the Apple Swift coding language

"The purpose of the application, the traditional knowledge map, is to generate all of the information that we have here in the community," said Sky Perley, the organization's executive director.

"And who better to gather this information than the youth? That way, they're both learning and teaching at the same time." 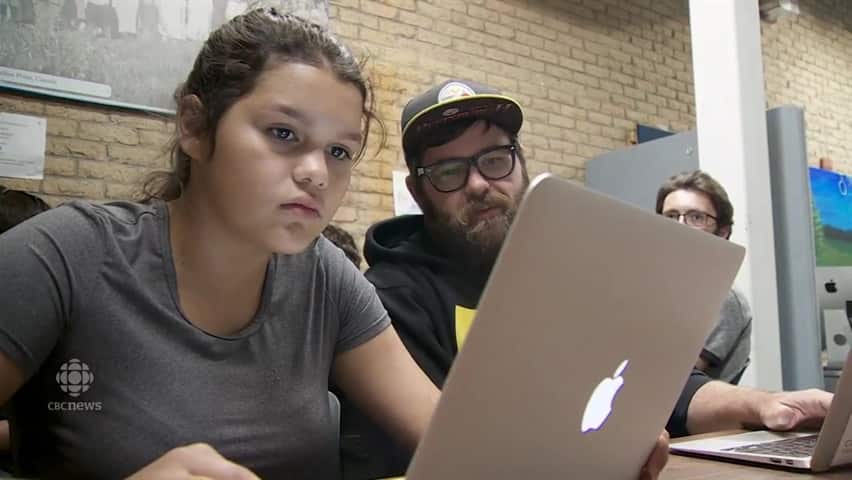 2 years agoVideo
1:44
The app allows users to place a pin on a map and see where and how people known as Wolastoqiyik are using the land for traditional and ceremonial purposes. 1:44

App developers gave the students a crash course on writing code and even had them contribute a bit to the application's source code.

"Personally, I wouldn't have gotten into coding myself but the program has showed me a lot," said Isabella Perley, one of the high school students taking part.

"But the program has showed me a lot. I really excelled in coding, and I think it's really cool and I might see a future in it."

In addition to the coding lessons, the Wolastoq Education Initiative has been teaching the students how to tell compelling stories, conduct interviews, take photos and videos, and use a video-editing software to bring the material all together.

"Storytelling is probably one of the most important things to the app," says Brett McPhail, educational lead with the program.

"They've been learning about storytelling and how to tell an interesting story about something that's happening in their community."

On a recent day, Jeanette Bear, another student in the program, was outside the Paul Pyres Community Centre, filming elder Victor Bear as he told a funny story about how his father taught him to make the bracing for his ash baskets.

"The video-taking was frustrating because I'm not really good with working with technology," Jeanette said. "But it did start to get easier and fun after a while."

All of the content in the app at the moment has been added by the students with the help of programmers contracted by Elephant Thoughts, the Ontario-based organization whose work helping Tobique First Nation improve reading and numeracy skills led to the creation of Wolastoq Education Initiative.

Sky Perley said he hopes the new app will also be a tool for showing the continuous use of traditional lands and treaties, should this ever need to be proven.

"Historically, companies have gone after our lands predominantly for resources," he said.

"But if we can prove through this map, that we had traditional use of these places where they want to mine, deforest or pollute our rivers, then we can show that we had use of them and have a better fight against it."

Jeanette Bear was on her way to shoot more content around Tobique, the largest of all the Wolastoqiyik, or Maliseet, communities and one she feels needs to tell its stories.

"Tobique isn't very out there," she said. "Hopefully, this map and us putting out the knowledge that we're gaining from this experience will help."

At the time of launch, the app will only cover the area surrounding Tobique First Nation. But Perley hopes to expand the app to include the remaining Wolastoqiyik communities and unceded traditional lands.

CodersNorth Tobique launches in early September and will be available for Apple products.