Speaker Chris Collins apologized Monday for comments that he said were "perceived as inappropriate" by a former employee of the legislature.

Speaker Chris Collins apologized Monday for comments he said were "perceived as inappropriate" by a former employee of the legislature.

Speaking at the front entrance of the legislature, Collins said he thought his words were "humorous and inoffensive," but the complainant saw them from a "different yet legitimate" perspective.

"It is important that those perspectives be heard, understood, and legitimized through a fair and thorough investigation," he said.

"To that end again I offer my complete and unreserved apology."

Collins did not say what the words were.

In fact, the allegations against him have been described for the public only in vague terms since they were revealed earlier this year.

An "overwhelming majority" of the other allegations against him were deemed to be unfounded, Collins said. 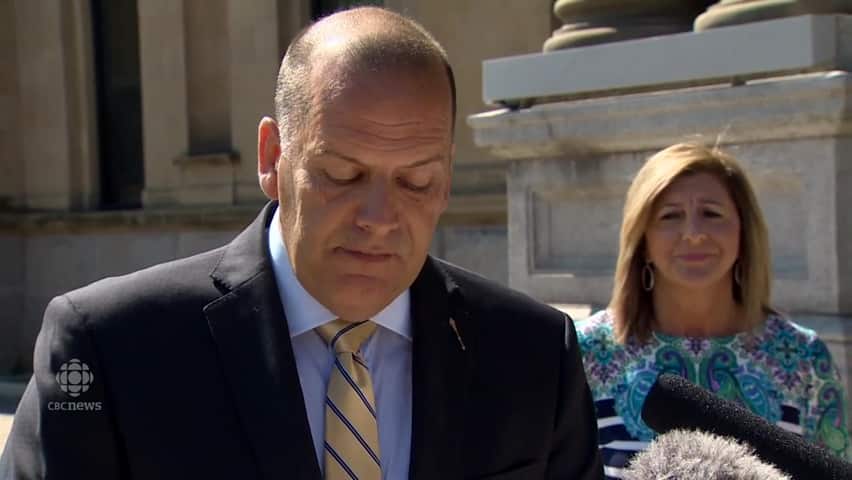 2 years agoVideo
1:39
The speaker of the New Brunswick legislature has issued a public apology for comments that an investigation deemed as harassing. 1:39

Premier Brian Gallant revealed the harassment complaint against Collins in a conference call with journalists in April. The legislative administration committee, or LAC, hired an independent investigator, who deemed the allegations to be "founded in part" last week.

Lawyer T. J. Burke spoke on Collins's behalf last Tuesday, a day after the finding was announced, saying the Speaker accepted full responsibility and was apologetic.

As with other details in the case, the identity of the person who complained about Collins is not known.

Monday's statement marked Collins's first public appearance since then and was the first time he addressed the complaint in person and not in written remarks.

Collins would not answer questions Monday, and his prepared statement did not reveal which parts of the complaint were founded and which were not.

Collins's wife, Lisette Richard, stood behind him as he read the statement. He thanked her for her support.

Like the other details in the case, the identity of the person who complained about Collins is not known.

On Friday, the Liberal majority on the all-party legislative administration committee, recommended Collins write an apology letter to the complainant and take anti-harassment sensitivity training.

Collins did not say whether he would follow those recommendations.

Opposition members of the committee said they couldn't judge whether the letter and training were an appropriate remedy because many of the details of the complaint were kept from them.

They only received a summary of the findings of the investigation, which Green Party Leader David Coon previously said did not contain enough information.

Collins did not rule out running for another term as MLA for Moncton-Centre in September's provincial election. He said in a statement in May he would not run as Liberal.

He said Monday the decision on whether he continues his political career will be made by him and Lisette and "perhaps the constituents of Moncton Centre as well, but not Brian Gallant."