Why did the chicken cross the road? 'He's got a Tim Hortons addiction'

Residents of Shediac, N.B., say a chicken has been crossing the road in the area of the Tim Hortons every day, at the same time, for weeks.

A chicken has been crossing the road at Tim Hortons in Shediac, N.B., every day, at the same time, for weeks 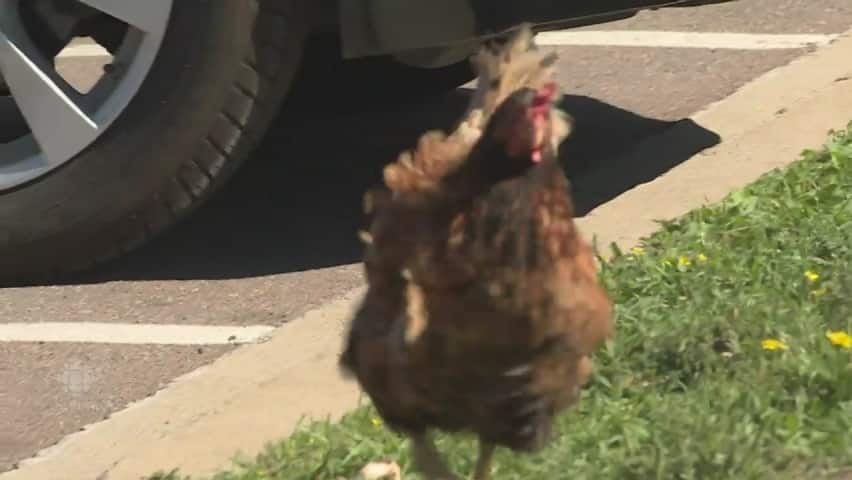 Why did the chicken cross the road?

3 years agoVideo
0:52
Every day, for the past month, at the same time, right after lunch, like clockwork, a chicken crosses the road in front of the Tim Hortons on Main St. in Shediac. 0:52

For the past few weeks, every day at the same time, around 1 p.m. — like clockwork, a chicken has been crossing the road on Main Street in Shediac, N.B., to go to the Tim Hortons, and its escapades aren't going unnoticed.

"I think he's got a Tim Hortons addiction," said Marcelle Leger, who works at the coffee shop.

"He wants a coffee. A double-double!" she said laughing.

Turns out the chicken belongs to a family living across the road.

Family members said the bird is a pet for their daughter, but did not want to be questioned further.

Leger, who described the chicken as a "determined" bird, said it has been causing quite the scene lately.

Motorists have been stopping on busy Main Street to let it cross, and locals have often escorted it back to safety.

"Two days ago, it was some schoolkids that were escorting him, and stopping traffic," she said.

Tim Hortons regulars have noticed its presence too.

"I was in here, having a coffee, bunch of guys … and seen a chicken!" said Donald Bourgoin, a regular customer.

"It's a nice plump brown chicken," said Larry Blanchard, who comes three times a day to this Tim Hortons.

"And it clucks, and it screeches and it pecks."

And the bird even has some smarts about it, according to Leger.

"He kind of does look for cars when he's coming over. Or he'll stop for a while, and watch the traffic and continue on. Sometimes it takes him five, 10 minutes to cross, but he eventually crosses over. It's the strangest thing."

Unlike other municipalities in the province, namely Moncton, Fredericton and Saint John, urban or "backyard" chickens are not allowed in Shediac.

The town of Shediac said it received calls about the bird a few weeks ago, and has sent over a bylaw enforcer to try to catch it, but to no avail.

When CBC spoke to officials, the city said it had no idea who the chicken belonged to.

But seriously, why does the chicken cross the road?

As for the age-old question of why the chicken crossed the road ...

"Oh, it just comes over to feed on this side. Instead of the other side," said Blanchard. "Chickens like to dig up the dirt, and peck away at it, and that's what it does."

"He just crosses the road, and picks at the grass, and comes around the Tim's and picks a few little things up, tries to find something to eat," said Bourgoin.

"He keeps crossing the road to have a coffee at Tim Hortons I guess … or maybe he likes their muffins!" joked Leger.