Charlie Cavanagh, 18, just won gold in her weight category at the youth world championship in Budapest.

Charlie Cavanagh, 18, on top of the world after Budapest championship

Charlie Cavanagh, 18, just won gold in her weight category at the youth world boxing championship in Budapest on Thursday.

"I'm on top of the world," the boxer said by phone. "I don't even know what I'm feeling right now."

'I was over the moon'

Her opponent in the championship bout was Russian boxer Angelina Kobakova.

Between the two fighters touching gloves and the referee holding both of their arms, waiting to declare a winner, 12 minutes elapses.

The Saint John fighter closed her eyes just before a champion was announced.

"I just wanted this so bad," Cavanagh said. "I've been imagining this my whole trip."

Boxing is a sport you can lose even when you should win, she said.

But the referee raised Cavanagh's hand.

"Those other fights were to get me there, but that fight is what it all came down to," the teenager said. "When I heard 'blue' I was over the moon. I was ecstatic. I couldn't even describe what I was feeling."

Being from Saint John and not having a lot of opponents to fight, she knew she came into the tournament, held by the International Boxing Association, with less experience than her opponents. 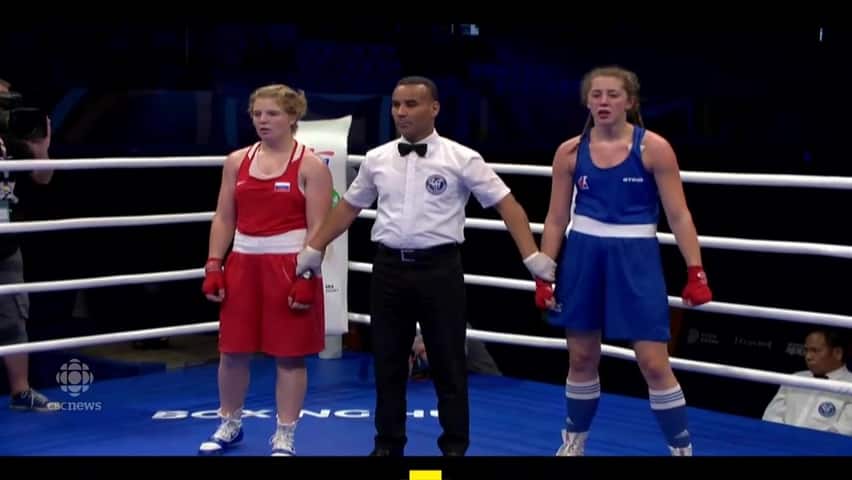 It made her anxious.

"After I warmed up and got into the ring, it all sort of faded away," she said. "I felt really calm and that's kind of what I love about boxing. You feel all these nerves and they all sort of disappear when you step into the ring."

She beat Kobakova by unanimous decision.

In fact, Cavanagh won all three fights in the tournament by unanimous decision.

She returns home on Saturday and will start school at the University of New Brunswick in Saint John on Tuesday.

Despite being a world champion, the fighter said she's not done.

"When I first started boxing, I would go out into the changing room, in the the back rooms, and I would shadow box because I didn't think I was any good," Cavanagh said.

"I never thought in a million years I'd fight, let alone be a world champion."