You sank my Craftsman-Ship: Cardboard boats battle for pool supremacy

The phrase "whatever floats your boat" took on new meaning at the University of New Brunswick on Tuesday afternoon, where engineering students achieved the near-impossible feat of floating boats made of cardboard and duct tape. 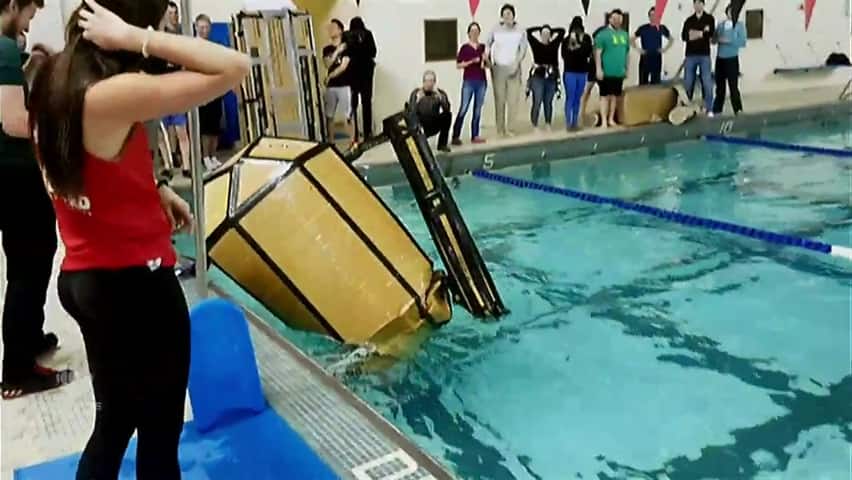 Check out the cardboard boat races at UNB

4 years ago
1:08
'Seafaring' students set sail at the University of New Brunswick this afternoon. 1:08

The phrase "whatever floats your boat" took on new meaning at the University of New Brunswick on Tuesday afternoon, where engineering students achieved the near-impossible feat of floating boats made of cardboard and duct tape.

As a test of their ingenuity and teamwork, engineering students finished their semester by building seaworthy crafts out of the not-so-seaworthy materials.

"Unfortunately, ours collapsed right before the end," said second-year engineering student Taylor Quinlan. "So we were close."

Professors captained their students' creations across the Lady Beaverbrook pool at the university's Fredericton campus as a part of a competitive relay race.

While some vessels held up admirably, other suffered from balancing issues, structural defects, and less-than-adequate paddles that contributed to their demise.

Despite the boats' comical appearances, Quinlan says there's a lot of design that goes into making them durable enough to keep several hundred pounds afloat, using only a paper product as construction material.

"First we tested the cardboard to see how much it could withstand. And we also built a prototype. And tested it in the flume in the engineering building."

With names like "Seal Team 6" and "Bluenose III" none of the boats escaped a watery grave at the end of the competition, as professors stress tested them all to their limits. But one notable entry did manage to hold four adults — before raucous behaviour sealed its fate.

"They were structurally – for the most part – okay," said Katy Haralampides, a professor in civil engineering at UNB. "Overall they floated the whole way."