A Fredericton artist turns old junk into model cars that put Power Wheels to shame. Three of them are on exhibit now.

'Upcycling' exhibit at the New Brunswick College of Craft and Design until Nov. 9

With the help of his daughters, Bess and Rachel, William Forrestall started making cars from items he collected from garage sales and junkyards across the city.

The cars are made of everything from frying pans to lamp shades to old exercise equipment. And they move.

"We wound up developing a series and an ongoing series of homemade cars made out of junk and garbage and repurposed materials," he said.

The project started more than a decade ago, when the girls were in elementary school listening to stories from their father, who built downhill coaster cars and wagons for sliding down the sidewalks at the University of New Brunswick.

From there, the family started building cars with the help of other members of the community.

Typically, the design process took place every summer on the family's picnic table. From there, they would end up testing the vehicles on walking trails near their home.

"If you've got kids, cobble something together with wheels they can push," Forrestall said at the gallery.

A work of art 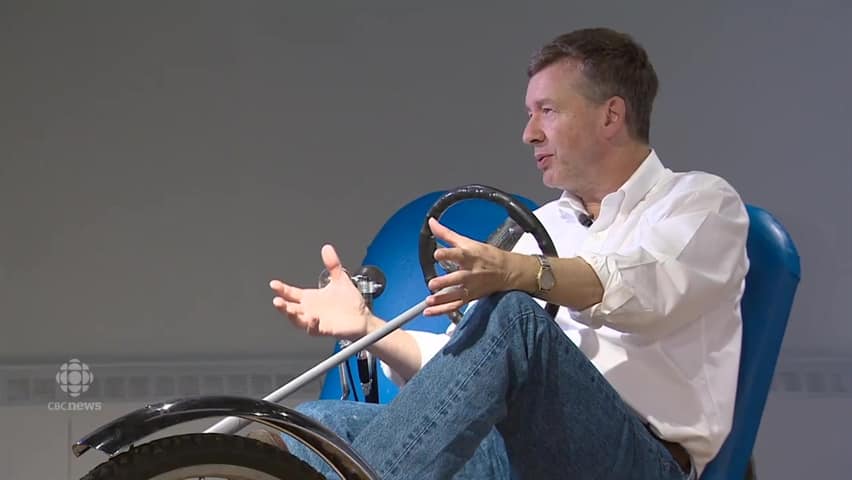 Forrestall has three of the vehicles on display at the New Brunswick College of Craft and Design in Fredericton.

"I've always admired Maud Lewis and it's kind of nice to maybe channel a bit of that into this creative project."

The three cars include the Red Bug, which was constructed between 2006 and 2010. Its wheels are made from children's bicycles purchased at yard sales, and the headlights are made out of old flashlights.

The Silver Car is also featured at the exhibit and includes, a standing lamp used as the headlights. The pedal drive system is based on salvaged bicycle components.

The Buddy Trike was made between 2012 and 2015. The trike's frame is made from scrap steel and the seats are made from scrap plywood covered in salvaged foam and blue vinyl.

"We wanted to build these vehicles for next to nothing," Forrestall said. "You're optimizing your imagination, how you see things, how you look at things and how you seek out potential in objects."

Forrestall doesn't know what he wants to do with the vehicles once the exhibition is over but he hopes he can continue projects like this with his two girls.

"It's about family and friends and colleagues, working together," he said.