The Saint John Emergency Measures Organization has expanded the evacuation area in response to a butane leak on Bayside Drive on the city's east side to include 30 homes on four streets due to a projected change in the wind direction.

Some homes and businesses near leak at 350 Bayside Dr. evacuated, street blocked due to 'ongoing fire hazard''

The Saint John Emergency Measures Organization has expanded the evacuation area in response to a butane leak on Bayside Drive on the city's east side to include 30 homes on four streets because of a projected change in the wind direction.

The leak in the four-inch pipe that runs from the Irving Saint John East Terminal to the Irving Oil refinery was discovered Monday morning during "routine testing," according to a tweet by Irving Oil.

All residents on River Avenue, First Street East and Second Street East and at 66-72 Spruce St., have now been asked to leave their homes, EMO spokeswoman Lisa Caissie said in an emailed statement Monday evening.

First responders have been going door-to-door to notify everyone and get them out, she said.

"The expanded evacuation is in response to advanced incident plume modelling from Environment and Climate Change Canada."

Bayside Drive remains blocked to all traffic between the Courtenay Bay Causeway and Red Head Road and people are being urged to avoid the area.

At the present time this is considered as an ongoing fire hazard.- Marc André Chiasson, Department of Environment

There is still no word on what caused the rupture at 350 Bayside Dr., when the leak started or how big it is.

No injuries have been reported, said Caissie.

"The safety of residents is the number one priority for all first responders and responding agencies and organizations," she said.

The evacuation of homes and some businesses on Bayside Drive is "a precautionary measure in advance of operations to mitigate the butane leak."

Butane is a colourless, highly flammable gas derived from petroleum. Inhaled, it can cause nausea, asphyxia and arrhythmia.

Butane can be blended with propane and sold as liquefied petroleum gas or blended into gasoline. It can be used in cigarette lighters and cooking torches and as a refrigerant, and employed in marijuana production to extract THC from plant leftovers.

"It's a gas and any gas is explosive and so anything that's explosive is dangerous so yes, this is a very serious situation until they get it under control," said Saint John Police Force Sgt. Chuck Elgee.

He expects disruptions will continue for several hours.

"This scene is going to be going on for some time — at least well into the evening and it could be longer than that," said Elgee.

"They want to be careful and make sure it's safe."

Saint John fire officials could not be reached for comment on the hazardous materials incident.

An inspector from the Department of Environment has been on site and has met with local fire officials, said department spokesman Marc André Chiasson.

"At the present time this is considered as an ongoing fire hazard, which is why about 35 people have been [forced to leave the area] while the cleanup occurs," Chiasson said in an emailed statement to CBC News around 4:30 p.m.

"As for threats to the air quality or the environment, impacts are still being evaluated on site and precautions are being taken to ensure public safety. Based on the actions taken during the response at this time, the department does not anticipate any further environmental issues."

NB Power and Saint John Energy officials are also at the scene, where a trailer command post has been set up for responders.

A warming centre was set up at the Saint John Boys and Girls Club at 1 Paul Harris St,, for affected residents, said Caissie.

They were provided with food and by about 9:15 p.m., they had all been transported by bus to a nearby hotel for the night, she said.

Pets are being permitted at the hotel and food for them will also be provided, said Caissie.

Initially, only the homes on River Avenue up to civic No. 35 were evacuated, but the area was expanded later in the day to include all of the approximately 20 homes on that street. The three other streets were added to the evacuation plan shortly before 8 p.m.

"Further information will be provided as it is available," Caissie said. 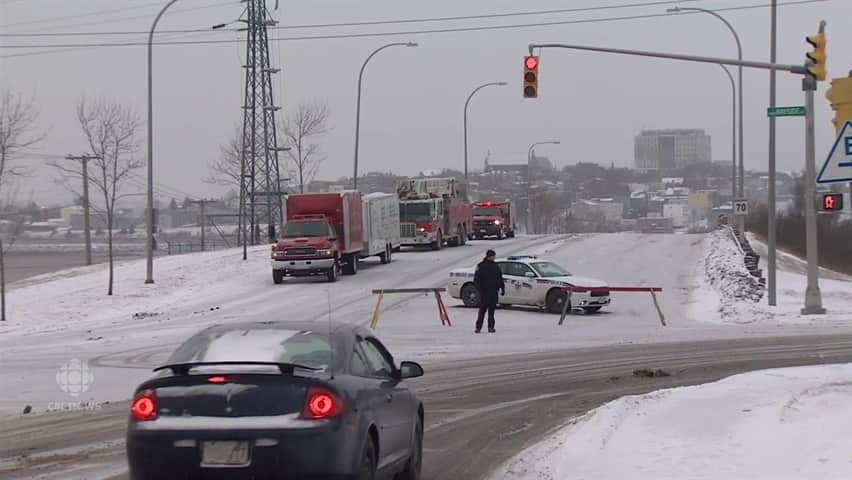 3 years agoVideo
0:41
Saint John emergency crews remain at the scene of a butane leak on Bayside Drive on the city's east side after a line that runs from the Canaport terminal to the Irving Oil refinery ruptured around 11 a.m. 0:41

Earlier in the day, Elgee told CBC News some people on River Avenue were initially allowed to remain in their homes because there weren't any butane readings in their area.

Some businesses on Bayside Drive were evacuated, including the Saint John SPCA Animal Rescue, he said. Only staff at the shelter left the building, not the animals, said Elgee.

The section of the Courtenay Bay Causeway, which had been blocked off, was reopened by about 12:30 p.m.

"I guess they consider it a safe area now," Elgee had said at the time.

Saint John Transit buses were called in to keep displaced people warm, while the Red Cross was notified, he said.

An isolated operational issue with one of our pipelines located off of Bayside Drive in Saint John is causing interruptions in the area. We apologize for the inconvenience as we work to resolve this issue as quickly as possible.

Irving Oil did not respond to a request for an interview, but posted on Twitter around 5:35 p.m. that the company is working with city operations and the fire department to "resolve the matter as quickly and safely as possible."

"We apologize for the inconvenience this has caused our neighbours in the area and are working with local response organizations to offer our assistance," the post stated. "We thank those who have been assisting in the response efforts throughout the day."

Around 12:16 p.m., the company had described the leak as "an operational issue" with one of its pipelines located off of Bayside Drive "causing interruptions" in the area.

Extra officers from other zones have been reassigned to east Saint John.

Some of the extra officers have now cleared the area, but about a dozen patrol officers remain at the scene, along with a sergeant at the command post as well as some civilian employees, said Elgee.