About 65 east Saint John residents will spend a second night barred from their homes as the clean-up of a butane leak at Irving Oil's terminal on Bayside Drive continues.

About 65 east Saint John residents will spend a second night barred from their homes as the cleanup of a butane leak at Irving Oil's terminal on Bayside Drive continues.

Evacuees like Kelsey Fillmore, her husband and their two sons, aged three and eight, had hoped to be back at home with their dog and cat by Tuesday night.

But Fillmore says they were informed late Tuesday afternoon they will sleeping at a hotel again, at Irving Oil's expense.

Although the leak has stopped and the site is "stable," the evacuation remains in place and Bayside Drive is still closed to all traffic between the Courtenay Bay Causeway and Red Head Road.

"For the safety of the public, and as a precautionary measure, the site and surrounding area remain closed to public access while cleanup operations are underway," the Saint John Emergency Measures Organization said in a statement.

Butane is a colourless, highly flammable gas derived from petroleum. Inhaled, it can cause nausea, asphyxia and arrhythmia.

The leak, discovered Monday morning at Irving's Saint John East Terminal, forced the evacuation of 35 homes on four streets in the area, as well as some businesses on Bayside Drive, including the Saint John Animal Rescue SPCA.

It's still unclear what caused the four-inch-diameter, above-ground line that carries liquid butane to the Irving Oil refinery to rupture. 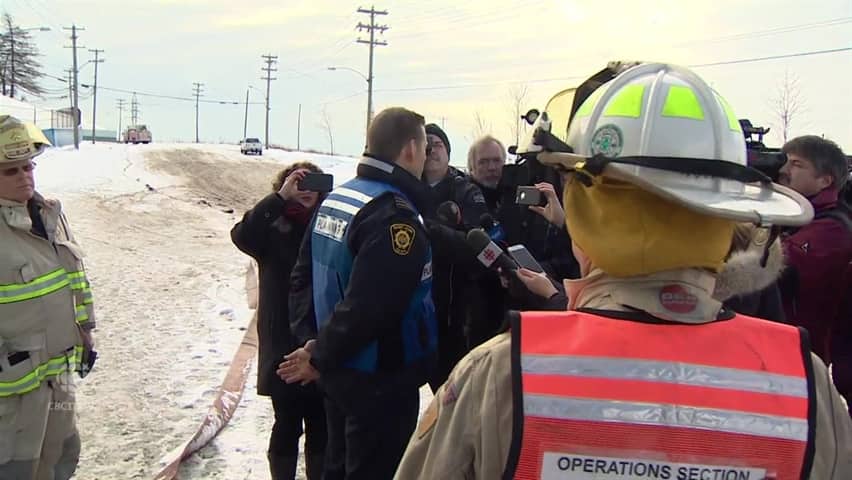 Butane leak update from the fire department and EMO

3 years agoVideo
1:50
Saint John emergency crews have stopped the butane leak at Irving Oil's Saint John East Terminal on Bayside Drive and evacuees might be able to return to their homes later today, according to officials. 1:50

But it may have been related to the extreme cold in recent days, according to Mark Sherman, Irving Oil vice-president and chief operating officer.

"It looks like it could be a small freeze split," Sherman said Tuesday morning during a media briefing at the EMO's command post near the intersection of Bayside Drive and the Causeway.

"It could be a fairly straightforward and easy repair."

Crews must clean up the area first, he said.

"You don't want any explosive mixtures or things like that that would put people that went to work on the pipe in any harm's way."

Sherman could not say how much butane leaked.

The pipeline itself holds an estimated 108 barrels, he said. Each barrel holds about 159 litres, for a total of more than 17,000 litres.

"It looks like a very small amount has come out," he said, referring to a "small pool" of liquid butane on the ground at River Avenue.

Crews are also purging the line of any residual vapours. Operations at the Saint John East Terminal will remain shut down until it's "completely safe" to resume, said Sherman.

Joe Armstrong, deputy chief of the Saint John Fire Department and the incident commander, said he had no concerns about the air quality.

"Everything is stable," he said during the media briefing.

"We've had no readings that need to alarm us at this point, by no means."

Officials initially thought evacuees might be able to return home on Tuesday.

"We are trying to get them back in as soon as we can, but it's a slow, methodical process and we have to make sure that everything is done right," said Armstrong.

Fillmore said her family's home on River Avenue won't feel the same after she learned Irving Oil employees only discovered the leak during routine tests.

"If they didn't know about the leak, the leak could have been happening for several days," she said.

"There's no alarms, nothing. Like, you know, it's really nerve-wracking."

Fillmore wonders whether the odour she and her husband noticed for about three days prior to the leak being discovered is related.

They initially thought it was propane and didn't give it much thought because they've lived there for nearly eight years and are "always smelling different smells coming from that terminal," she said.

But on Monday morning, when they were leaving to go to work, the odour was "nauseating," she said

"Whatever it was smelled like sulphur and just something rotting. It was really bad."

Emergency crews were called to the scene at around 10:30 a.m.

Sherman could not comment on a possible connection between the leak and the odour.

The refinery uses liquid butane as an additive to pressurize gasoline in the winter, said Sherman. Without it, vehicles would be very difficult to start and wouldn't run very efficiently, he said.

It is imported by rail to the rail terminal and pressurized up the pipe in question to the refinery, he said.

The leak has had no immediate impact on the refinery, said Sherman.

"However, there is a point in time where if we can't get finished product out, we'll have to cut [production] rates in the refinery," he said.

"One of our secondary risks after this one is we need to make sure we can get finished products out to all our people and residents in New Brunswick for things like emergency services, ambulances, police, fire departments, home heating for residents — so It's a big issue.

"We're part of New Brunswick's critical infrastructure and it's important we get back in business as soon as we can to make sure the supply chain is full."

Fillmore was working in the north end  Monday morning when she learned of the butane leak through a text from a friend. Her boss gave her the OK to leave and she rushed to the scene.

When she arrived, around 12:30 p.m., she was told by fire officials it was going to be about eight hours before evacuees would be allowed to return to their homes.

"By 3 o'clock they had changed that to, 'it's probably going to be a day or two, possibly three,'" she said.

Firefighters escorted Fillmore to her home so she could retrieve the family's pets — Fenway, a 10-year-old Tibetan spaniel, and Felicia, a four-year-old Maine coon.

Firefighters took a butane reading while they were in the home and none was detected, she said.

Other neighbours were also escorted one at a time to their homes to retrieve pets and at least one man was escorted to retrieve his medication, said Fillmore.

She dropped her cat off at her mother's in the south-central peninsula, picked up her sons, Quentin and Owen, from the warming centre set up for evacuees at the Saint John Boys and Girls Club, and headed to the Hampton Inn & Suites on Fashion Drive for the night.

Her husband, who works at one of the industrial parks on the east side, got tied up in traffic, due to Bayside Drive being blocked off.

It made for a "hectic" day, but Fillmore said she is grateful her family and neighbours are safe. She also commended the emergency crews.

"They've been nothing but good and courteous to us."

The Saint John EMO partnered with the Canadian Red Cross to provide accommodations and meals for affected residents.

With files from Connell Smith and Sarah Trainor