Premier Brian Gallant and his cabinet ministers are taking a pay cut as the Liberal government continues to find ways to eliminate the province’s deficit.

Salary reductions for premier, cabinet ministers are in place until the deficit is eliminated 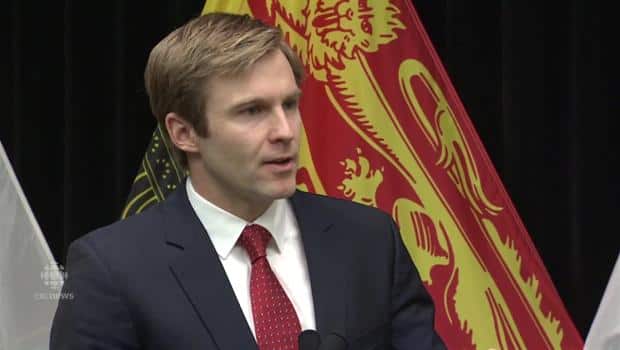 6 years ago
0:37
Watch Premier Brian Gallant address a reporter's question about an upcoming independent review of MLA salaries will offset pay cuts taken by he and his cabinet 0:37

Premier Brian Gallant and his cabinet ministers are taking a pay cut as the Liberal government continues to find ways to eliminate the province’s deficit.

Gallant told reporters at a Monday morning news conference the reductions in the salaries are “leading by example.”

“We will be making difficult decisions, and we want to make these decisions together. To do so, we understand that we must start with ourselves.”

The cuts will affect only the premier’s and ministerial portions of the salaries and will not reduce the MLA’s base pay of $85,000.

Our group hopes this is emblematic of something much, much bigger.- Kevin Lacey, Canadian Taxpayers Federation

The pay cuts will last until the province’s budget is balanced.

"Our group hopes this is emblematic of something much, much bigger. We are not going to get to a balanced budget unless they do something more dramatic," he said.

"These moves are not substantial savings, it is really symbolic. It sets a culture in order to find other savings. We want to see the province begin to look at the major cost drivers in government, like health care, and look at different ways of delivering services."

Lacey said the provincial government could look at privatizing Crown corporations, such as NB Liquor, and use the revenue from the sales to pay down the debt.

In the short term, Lacey said Gallant could also eliminate stipends that MLAs get for attending committee hearings. He said that is work that MLAs should be doing as a part of their job.

“As a province, we need to start making the difficult decisions,” Cardy said in a statement released on Monday.

“It will take a combined effort and today it is nice to see some movement from the top.”

The MLA salary will be subject to an independent review later this year. Gallant said he will not support an increase in MLA salaries.

Gallant’s government has already foreshadowed the need for significant cuts or possible tax increases in order to balance the budget.

Health Minister Victor Boudreau, who is the minister responsible for the strategic program review, said the Liberal government is looking to save upwards of $600 million by cutting programs and raising revenues.

Boudreau is in the midst of a public consultation tour to find out how New Brunswickers want to close that fiscal gap.

In November, Finance Minister Roger Melanson said the projected deficit in 2014-15 was $377.2 million.

This is the latest in a string of deficits that have contributed to the soaring provincial debt.