Advocates for the release of breast density information, say women, and some health-care professionals, are being kept in the dark about the risks surrounding dense breast tissue — common tissue found in millions of Canadian women.

Dense breast tissue can obscure cancer on a mammogram image

Kathy Kaufield was given the all-clear following her regular mammogram screening in June 2015. Six months later she discovered the lump.

She found it on her own by chance in a Saint Andrews hotel in November of that year after forgetting to pack her shower puff. While cleaning by hand, she felt the growth.

"It was big," Kaufield said. "It was about the size of a golf ball."

The Quispamsis communications consultant and mother of two was told an aggressive, grade three tumour had been overlooked in the screening.

Next came a "gruelling and expensive" year of treatment, including 20 weeks of chemotherapy.

The 50-year-old happily reported a clean round of recent checks with her oncologist, but Kaufield, sporting the physical and emotional scars of her battle with breast cancer, now knows she was missing crucial information that could have led to earlier detection. 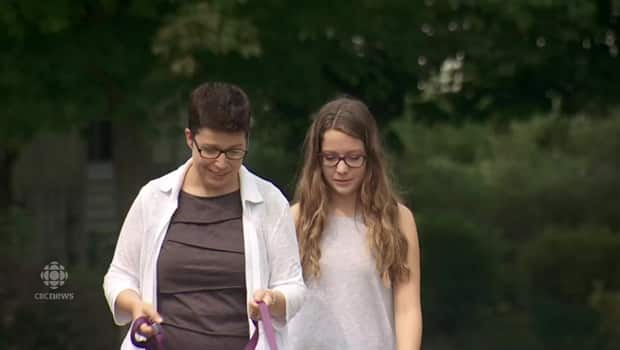 'Women are dying in New Brunswick'

Kaufield has learned that she has dense breasts — tissue that can obscure a mammogram image. She also learned the denser the breast, the better the chance of developing cancer.

And she's learned why, in part, this information isn't conveyed to the vast majority of women: a federally funded task force that sets the nation's preventive health guidelines — guidelines relied upon by family doctors — decided to omit that bit of potentially life-saving information.

Now, Kaufield has launched an online campaign raising awareness and encouraging women to lobby the New Brunswick government for change, while a group of other survivors and researchers takes the fight to the Canadian Task Force on Preventive Health Care.

The goal is to improve screening practices and ensure women are aware of their density and the associated risks to boost the chances for early detection.

"Too many women are finding their cancer at stage four," Kaufield said.

"And the hard truth is that women with stage four breast cancer can live for a long time, but there's no cure and women are dying."

'A snowman in a snowstorm'

Breast density isn't something you can discern through touch or sight. It's something radiologists discover through mammography.

Breasts are made of glandular, fibrous and fatty tissues, according to the American Cancer Society. If more than half the tissue is glandular or fibrous, the breast is considered dense.

That can create a problem for mammograms, said Dr. Paula Gordon, a breast radiologist and clinical professor at the University of British Columbia.

Dense breasts significantly reduce the machine's ability to identify cancer because the dense tissue, which is normal tissue, appears white on a mammogram.

"It's like trying to see a snowman in a snowstorm," Gordon said in an interview from Vancouver.

Fatty tissue appears black on the image, making it easier to spot a growth.

If we do ultrasounds on women with dense breasts, we are going to find three to four more cancers per 1,000 women. In other words, we're going to double the detection rate over mammography. -  Paula Gordon, radiologist, UBC professor

Dense tissue is broken into four categories — the least dense category being almost all fatty tissue and the most being mainly dense tissue. Gordon said the densest category accounts for about 10 per cent of women.

As Gordon works to raise awareness for the issue, she's said there are benefits of additional screening with an ultrasound. She wrote the first paper that showed ultrasounds could spot cancers that were missed on mammograms and too small to feel.

Studies show mammograms are 97 per cent accurate with fatty breasts. The accuracy drops to about 50 per cent for women in the highest density level.

Gordon said research shows an ultrasound increases the likelihood of detection and "will ultimately save lives."

"If we do ultrasounds on women with dense breasts, we are going to find three to four more cancers per 1,000 women," Gordon said. "In other words, we're going to double the detection rate over mammography."

To be an accepted method, however, it needs to be test-proven through a randomized controlled clinical trial. Gordon said a trial in Japan is producing the expected results, but nothing will change, if at all, until the trial has ended and the findings are published.

And that could take decades.

American journalist Joan Lunden's 2016 book, Had I Known: A Memoir of Survival, changed Jennie Dale's life. Dale had been diagnosed with breast cancer 18 months prior to the book's release and was researching the disease in the meantime.

She first encountered the issue of breast density in reading about Lunden's own dense breasts discovery.

It opened her eyes to the wealth of information gathered by researchers and to the American organization Are You Dense?, a public charity geared to educating the public about screening challenges or what it calls the "best-kept secret."

Compelled by like-minded advocates across the globe, Dale co-founded Dense Breasts Canada in February 2017. She said in an interview from Toronto that the non-profit organization is seeking changes to health-care policy and protocol.

It boils down to "just a line" on the mammogram report given to patients. The organization wants provincial governments to mandate information about dense breasts and further options be included on the report.

The organization also wants to ensure family doctors are informed about the risks and that health-care providers offer supplemental screening for women in the highest density level.

"We put our faith in our mammograms and we believe them, but it's a false sense of security."

Your postal code determines what you know

General practitioners are given breast density information in all but three provinces and territories — Nova Scotia, Manitoba and British Columbia.

In some provinces, the information is given only to family doctors when the patient is in the densest category.

New Brunswick government spokesman Paul Bradley said the delivery and operation of screening services and the reporting of breast density to primary care providers and women is the responsibility of each screening site — there are 14 in the province — and respective regional health authority.

Both Horizon and Vitalité health networks offered similar statements, saying a mammogram result notification is sent to both patient and general practitioner, with the clinician receiving all pertinent exam details, including breast density, from the radiologist.

Patients can access to their medical files upon request.

The information is not directly relayed to the majority of Canadian women following a mammogram. Four provinces and one territory will recall women if they're in the densest category. New Brunswick is not on that list.

"Your postal code is determining your access to health information," said Dale.

It's estimated that 80,000 New Brunswick women have dense breasts — 18,000 of which are in the highest category.

Dale says until guidelines change, women need to be aware and speak up about density and additional screening.

The task force states it prioritizes evidence over consensus in its decision-making.

After being disbanded in 2005, it was revived by the Public Health Agency of Canada in 2010 as an independent, arm's-length organization. Today, the task force says that its clinical practice guidelines "inform more than 36,000 primary care providers in delivering preventive health care."

The most recent guideline for breast cancer was published in 2011 and makes no mention of breast density. The guideline essentially says to start routinely screening every two to three years at the age 50.

Evidence of screening challenges has existed for roughly 40 years, but the information was omitted from the guideline, Gordon said, and the vast majority of the population is unaware of the issue.

In their discussions with the task force, Dense Breasts Canada was previously told the mammogram was the only test-proven method of reducing breast cancer deaths, sufficient evidence about the risks of density is lacking.

The task force is in the process of updating its breast cancer guideline, and, according to the summary of evidence it will be reviewing, breast density is being considered.

Describing breast density as an "emerging risk factor," the summary acknowledged there is a link between dense breasts and a higher chance of developing cancer.

After several requests, the task force declined an interview.

"The Task Force is currently working on an updated breast cancer screening guideline and does not comment on its guidelines when they are in progress," chair Dr. Brett Thombs said in a brief statement to CBC News.

The cost of saving lives

Advocates are hopeful for change, but they're aware that what they call the simple fix — that line on the report — means government health spending would rise.

"It's cheaper to treat than to screen," said Dale.

"It's not feasible in our economic environment and the overloading on our health system to screen women with dense breasts."

Dr. Martin Yaffe, a professor of medical biophysics and medical imaging at Sunnybrook Research Institute in Toronto, said you will always spend less not screening and treating the illness later, he said.

Yaffe is part of a team of researchers who published a new study examining the cost burden of mammography on public health-care systems. The study looked at the effects of screening women earlier and later in life as well as the frequency to better understand how many more lives could be saved and the cost.

I often say to my husband there's before-cancer Kathy and after-cancer Kathy, and I'm a changed person."- Kathy Kaufield

The task force's current recommendation is for women aged 50 to 74 to be screened every two to three years. The study found the most benefit by lowering the starting age to 40 and screening annually.

That comes at a higher price, but Yaffe said it's not cost-prohibitive for governments. The study found it would cost on average $6,000 per woman for lifetime to screen and, if necessary, treat.

"We have shown that the greatest single cost contributor in a screening program is screening itself," the study reported.

"The decision on how to screen is related mainly to willingness to pay and a determination as to what is an acceptable rate for recalling women for further examinations after positive screening results."

When it comes to women with dense breasts, Yaffe said it's best to seek additional screening, be it ultrasound or MRI — but, again, that's more expensive.

As a compromise of sorts, Dense Breasts Canada wants women in the highest density category, about 10 per cent, to receive extra screening.

The guidelines don't mention the issue of costs, focusing instead on the benefits and harms of a preventive measure.

Tales like Kathy Kaufield's are not uncommon. Within in the movement, they're called "had I known" stories — distressing thoughts of what could have been.

"(The cancer) could not have reasonably been seen because I had dense breast, but I didn't know I had dense breasts," Kaufield said. "If I had known that my breasts were dense, I would have been really vigilant with my self-exams."

Armed with the knowledge of their breast density, women can be proactive about their health, Gordon said, listing suggestions that can make a difference, such as maintaining a healthy body weight, moderate exercise and reducing alcohol consumption.

Then there's additional screening for early detection, and that could save the patient a tremendous toll on her body, Gordon said.

If the cancer is found when small, women can have a lumpectomy and not need their whole breast removed. If large, a mastectomy is probably necessary.

If small, chances are the cancer hasn't spread to the lymph nodes in the armpit or elsewhere, reducing the need for armpit surgery. If not, significant armpit surgery can produce serious health conditions, such as lymphedema.

If found early, patients may need less-aggressive chemotherapy or be able to forgo it altogether. If not, women like Kaufield undergo a "life-changing" experience.

"I often say to my husband there's before-cancer Kathy and after-cancer Kathy, and I'm a changed person," she said.