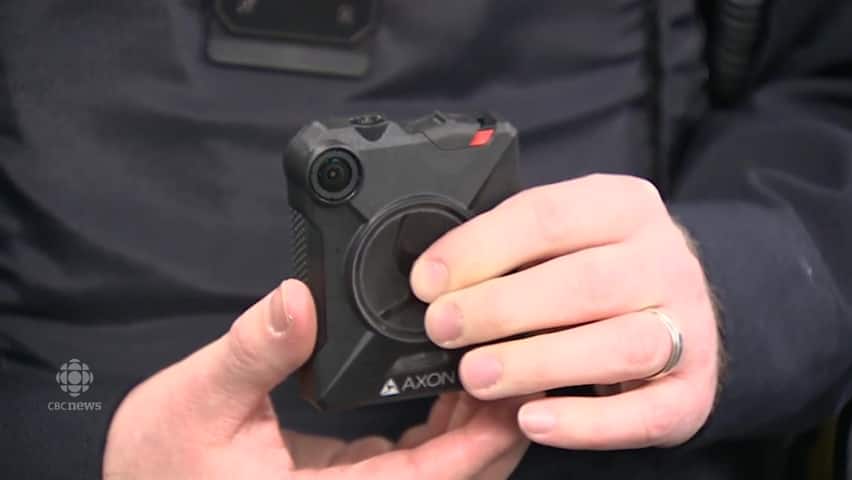 But Gaudet said he also hopes the cameras will raise the public's trust in the force, now that more police interactions with residents will be recorded.

"We want to always continue to build public trust," he said. "This is just another tool to help us in our investigations and in public transparency."

Gaudet said the force did not want to outfit all officers with the technology at once.

Body cameras are being used or have been tried out by police in many parts of the United States and in Calgary, so the force received guidance from other stations.

The Fredericton department also worked with the province's privacy commissioner, the Office of the Attorney General and the city solicitor on the project.

But it still wanted to test the technology first, "to see if it's worthwhile in our community," Gaudet said.

Gaudet said it's hard to say how much running the operation will cost. The cameras and uploading station cost about $5,000, but the department isn't sure how much it will have to pay for storing the videos, he said.

"We want to see what the costs are and what the benefits are," he said.

The cameras are supplied by Axon, a company that sells stun guns to the force and will oversee the storage of the files in Canada.

Once an officer hits record, the file is directly uploaded to encrypted cloud storage, where it can only be accessed by an authorized member of the force, which will be Staff Sgt. Paul Battiste.

Battiste said he can only share a file with the courts if the person on the other end is authorized to receive it. The public can request access to footage by submitting a right to information request to the force by email.

Battiste said the videos are stored based on the same policing standards that apply to any other information collected as part of an investigation. Officers cannot access the footage, edit or delete files, he said.

"So depending on the severity of the crime and the type of investigation that determines the amount of time that videos are being kept," he said.

Helps with the job

Const. Patrick Small said he volunteered to wear the camera, hoping it will make his job easier and help in cases where a resident question his actions, such as giving out a ticket.

Being able to point to the camera as a source of proof is one way to de-escalate a situation, he said.

"When we are out there, there's lots of stuff that's going on," he said. "And it's nice to have our own camera capturing, whereas a lot of times there are usually other people that capture only parts of what's happening."

Battiste added that the force leaves it up to the officers' discretion when they want to hit record. Batteries on the cameras last up to 12 hours but he expects that officers will turn them on and off during the day.

People will be told that they are being recorded, and they cannot refuse, he said.

To protect the privacy of people not connected to a case, videos will be redacted when necessary, "but the original file is always kept," he said.